For those approaching the assembly area from the Newbold Terrace East direction, with purpose and optimism for a parkrun time to be proud of, we were greeted today by the shiny, newly laid black tarmac road surface and footpaths on the stretch from the Leisure Centre. This will bring welcome road safety benefits to parkrunners. Credit to Warwick DC for scheduling this improvement.

Taking into account that many families have embarked on summer vacation already, way in excess of 500 runners, was a great turnout this morning.

Drumming up enthusiasm to be a volunteer for parkrun is, I sense, a candidate for a shortlist of ‘worst-job-in-the world’. 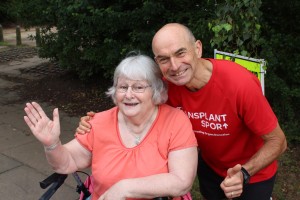 Not everyone can ‘sell’ this opportunity (although Simon Perkin somehow manages to make this look easy, consistently).

I am relative newcomer, and am tending towards adopting a parkrun Volunteer one-in-ten approach: for every 10 parkruns, I should offer myself up as a volunteer. When school term begins in September, I may reach my first milestone of 50 parkruns, so my conscience prods me to raise my volunteer tally to 5 or above before the end of this month.

Today, I volunteered twice – barcode scanner, and run report writer. A bit random, as a pairing, but fun, nonetheless. 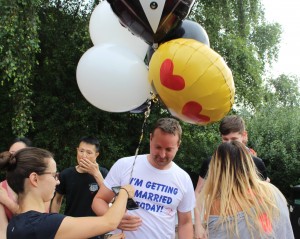 Every parkrun brings with it a plethora of people stories, many of which, as a runner, one doesn’t have time to digest. This week, the pick of the bunch are an imminent bridegroom

running on the morning of his wedding day (courageous prioritising), a runner dragging a "Happy Birthday Martin" helium balloon round the course, a recovering heart attack patient, returning to his first parkrun, after recuperation, and Welsh visitors to Leamington Spa, perhaps encountering for the first time, the challenging hill climb during the 2nd kilometre of our parkrun course.

Good to see, also, the continual rise in the number of parkrunners bringing their own drinks containers. Single use plastic cups are being phased out for post-run re-hydration, so now is a good moment to plan for this contribution to reducing plastic waste originating at our Saturday morning events. 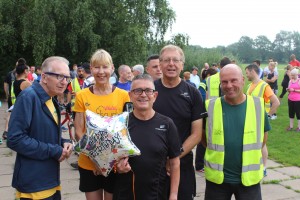 I confess to have heard of, only very recently, the parkrun Volunteer Mobile Phone App, which delivers new technical solutions to two key tasks – timekeeping and barcode scanning. Nonetheless, today, and via the mobile phone, barcode scanning was prevalent amongst the 8 barcode scanner volunteers, all but eliminating post-run queuing.   Moreover, of the three stopwatches on the finishing line, two failed, but the new parkrun Volunteer mobile phone stopwatch, functionality discreetly saved the day.

One or two folk expressed concern and doubt about whether the new technology would or could record both their parkrun number and their finishing position, with such speed, but each were quickly and sympathetically reassured. 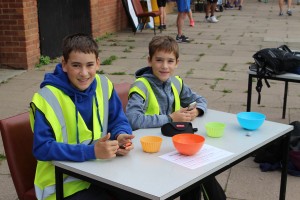 And so to the finishing runners. From my vantage point, as each reached us, some catching their breath, and others looking as fresh as a daisy, it had been more humid on the run course than perhaps was apparent. ‘Muggy’ was the commonly held opinion of runners arriving with their barcode wristbands and their finishing line tags.

Congratulations to all parkrun participants this morning. Dual-Task volunteering at parkrun is a good way of maintaining a 10:1 Run/Volunteer ratio. Not entirely convinced with the pairing I opted for this morning. All the same, I strongly recommend it.

This week 539 people ran, jogged and walked the course, of whom 61 were first timers and 60 recorded new Personal Bests. Representatives of 44 different clubs took part.

The event was made possible by 42 volunteers - extra thanks to those in bold who volunteered for the first time and to Mark Ehlinger for this report and photographs: