Welcome to this week’s run report, which is a joint effort between me and 9-year-old Jamie. It’s not so much about actual running as the people that took part. See how many of them you know – you might even spot yourself… Today’s run director Jeremy Pope welcomed 443 runners and 45 volunteers to Leamington parkrun number 436. This included 5 people volunteering for the first time – thank you to Andrew French with Caitlin, Sergi Gonzalez Prunera, Catherine Morgan and Neil Worsnop; you did a great job!

Onto the milestones. Well done to Jack running his 10th, Owain and Simon Heath on their 50th, Sarah Brooke-Taylor (100th) and Brian Warren earning the coveted yellow bib for 200 runs. Also congratulations to Kevin Yates (not pictured) who visited Leamington for the first time to celebrate his 400th parkrun. 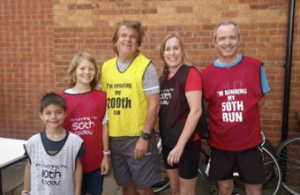 The comments column of the visitor’s book was full of love for Leamington (it’s a great read if you need reminding how lucky we are). There were guest appearances from Mandy from Llanfynydd, Kevin from Southampton, Sav and Cian from Mansfield, Ian from Bishop’s Stortford, Neil and Kate from Lowestoft, Chris from Banbury, Lorraine and Colin from Weston Super Mare and Sarah from Beckenham. Thanks for choosing Newbold Comyn for your parkrun tourism this week.

And now over to Jamie, who has set himself the challenge of undertaking all the different volunteer roles. This is role number 7 – his first run report. He decided to interview a range of runners and volunteers – the results made me smile and I hope you enjoy reading it too…

This week 443 people ran, jogged and walked the course, of whom 52 were first timers and 47 recorded new Personal Bests. Representatives of 38 different clubs took part, and the event was made possible by 45 volunteers.