It was very quiet at Leamington parkrun today, with only 196 dedicated runners coming out in the rain. There were no milestones or birthdays being run; a milestone in itself. I am not sure what kept them away but I heard mention of the WC. So for all those of you with a desperate case of the runs, we hope you can remove yourself from the WC soon and return to parkrun!

The dearth of runners left me closer to the front than I have been since 2010, but there were few PBs to be had due to the conditions. Well done to the 13 people who managed it.

I feel a trainer/washing machine interface cannot be avoided after my run, much as it is against recommendations! 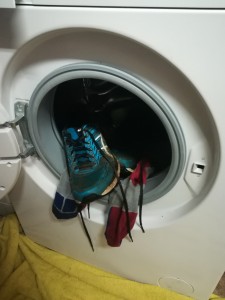 I thought I would throw a spotlight on Kate, AKA Mrs Doyle, in the absence of news today. Kate started helping out with the cafe when her son, Jason, started up Leamington parkrun in 2010. She loved it so much that she just kept coming back. I interviewed her to find out why. (There is a bit of paraphrasing, as I did not record our chat).

What is it that you love about parkrun?

Mrs D: The people. I just love meeting all the people and they have all been so kind especially since I have been poorly. People have been lovely.

How is your treatment going?

Mrs D: Alright really. I had my third round of chemotherapy yesterday and I feel OK. Just wiped out and tired. But I think I might feel a bit worse when the chemicals build up in my system over the next few rounds. I have a wig in case, as I think I’m going to lose my hair. It’s white and pretty good. (Other lady in cafe expressed disappointment that the wig is not psychedelic).

I have heard that you live next-door-but-one to our Maggie. Is that true?

Mrs D: Yes, she often comes with me to parkrun. She might have come with me originally although she is long-term friends with Tess too, so I’m not sure which of us got her along initially.

Have you got any confessions from your past?

Mrs D (laughing): Probably a lot of drunk and disorderly in my youth. Oh, I remember when I was 21 having had far too much to drink, getting into a wood yard with some friends and trying to drive the truck that was there. I couldn’t get it to drive though.

Where do you come from?

Mrs D: Wexford in Southern Ireland but I haven’t been back for years.

How many children have you got?

Mrs D: 2- Jason and another son in London, plus 2 grandchildren, both girls. No, I haven’t got any great-grandchildren yet (indignant)!

What did you do before you retired?

Mrs D: I was a nurse at the old Warneford Hospital and then at Warwick. I loved it. I wish I was still working there.

Kate then revealed that she has a 17 and a half year-old Staffordshire bull terrier cross at home, called Patsy. Patsy isn’t feeling very well this morning so I am wishing both her and Kate a speedy recovery. Whilst we stood talking, everyone coming in said a special hello to Kate and it was obvious how much she is loved by the Leamington parkrun family. I was so caught up in talking to her that I forgot to take any photos and the best I could manage was Tess’s backside leaving and a rare view of an almost empty parkrun car park. (Sorry Tess). I’ll try harder next time! 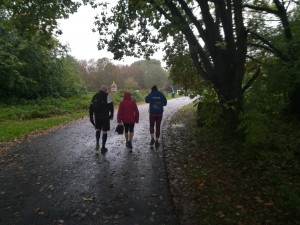 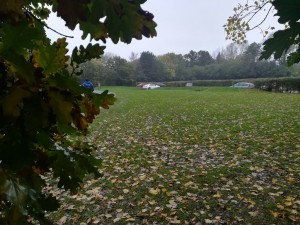 This week 196 people ran, jogged and walked the course, of whom 19 were first timers and 13 recorded new Personal Bests. Representatives of 27 different clubs took part.

The event was made possible by 37 volunteers: