Following last weekends double disappointment, parkrun number 232 finally took place this morning under the Run Directorship of Amelie Wallace.Today, we welcomed tourists from Mile End, Bakewell and Wrexham as well as 12 first timers. Four runners were completing their 50th parkruns along with Chris Arkell who was running his 100th. There was also a belated 10th birthday shout out to Frank Shepherd who was running his 10th ( he did want to do it before his birthday but last weeks cancellation put paid to that). They were among the 410 runners/joggers/walkers who lined up at the start in near perfect weather conditions.The first male to finish today was Aaron Burgess and the first female was Katy Bradley who finished 45th in a personal best time of 21:53. As well as Katy, there were 67 other participants who achieved PB’s today. Well done to you all.Finally, a big thank you to Maggie and all her hi viz heroes who all looked resplendent in the sunshine this morning. Don’t forget to view the future roster if you would like to volunteer at a future event.Alan Fleckney

In June 2016 I completed my first parkrun at Lee-on-the-Solent after seeing the “caution runners “ sign at The Shack the previous week. I asked the Marshall what was going on and he told me all about parkrun. I registered and turned up the following week.Today, I ran my 150th parkrun and my 150th at Lee In conditions one could only describe as challenging. Not only did we have the wind to contend with, there were also some scarily dressed individuals, including a skeleton running on his own as he had no body to run with. They were among the 342 runners/joggers/walkers who chose to take to the prom in preference to watching England in the Rugby World Cup Semi Final. [it .will be interesting to see how many turn up next week] 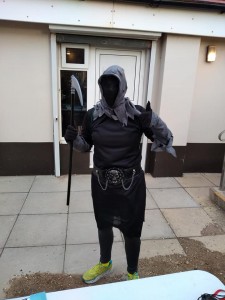 We were joined on the start line by tourists from as far away as Ripon and Kilmarnock and 28 parkrun first timers. Welcome to the family and hope to see you back soon. There were also 5 people who reached their 50th milestone. Congratulations to you all.With pacers every two minutes a PB might have been on many people’s agenda but the stiff easterly quickly changed that, although 19 people did manage a personal best in those conditions and well done to them. I had planned to finish between the 27/29 pacer but ended up nearer the 31. 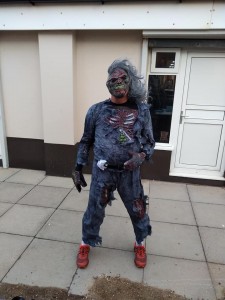 Biggest thanks must go to all the volunteers who, like today, stand out in all weathers to put this on for us. As one who has been soaked to the skin on marshalling duty, it can sometimes seem a thankless task so please thank them as they encourage you.First male home today was james Teuten and the first female was Amy Smalley. But it is at the back of the pack where the real winners are to be found. Many, like the lady I run/walk paced to a PB last week have faced or are still facing personal life changing challenges and for them just getting to the start is a big achievement in their journey.Finally, on a personal note, I would like to thank all the runners who knowingly or unknowingly have helped me negotiate the course for my 150 runs. As someone who is registered blind your help is invaluable especially negotiating the bollards and gravel. If any of you wonder why I wear my hooped top every week it is so my wife can find me at the finish. Also if you talk to me and you think I’ve ignored you it’s just that I haven’t seen you so please don’t feel offended.I look forward to running with you all as I start my journey to 200.Alan Fleckney 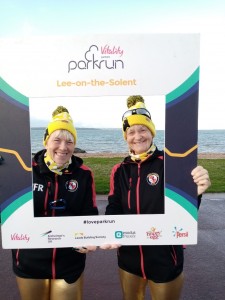 Lee-on-the-Solent parkrun – we loved you! The course is an out and back first towards Browndown and Lee-on-Solent Sailing Club, to a turn-around point, and then back, past the start, and out towards The Shack, crossing the Daedalus Slipway, to the second turn-around point, and then back again, along the prom to the finish line, which is near the start. We found it very easy to get to from Portsmouth – catching the ferry to Gosport, and then the X5 bus to Lee, which stopped very close to
the start of the run.
First and foremost, a big thank you to all of the hi-viz heroes – without whom the event would not have taken place.

Welcome back for their second parkrun to Robert OLDFIELD, John BATTEN, Joshua BATTEN and Teresa HALLUM. We hope you will enjoy being part of this family as
much as the rest of us do.
I would like to say a personal thank you to Tina BLACKBURN, of Solent Running Sisters, for keeping me company for the second half of the run. It was lovely chatting to you about parkrun tourism and other running events.

The volunteers were super friendly, as were the other runners.
Cal and I finished off by having a paddle in the sea (we feel we have to do this, no matter what the weather is like, as we live just about as far away from the sea as you can get). Then we made our way to Leon’s Café, which we had passed on the second leg of the run, for a hot drink (discount available to park runners) and a chat to some of the other park runners and volunteers.

Cal Oddy and Helen Rowe (aka The Golden Girls).

It's hard to believe we are in October already! We have a number of special runs/events coming up, so here they are below, as always we rely on a number of volunteers to make these happen, so if you can help out please let us know by emailing the address at the bottom of this post.

26th October - Halloween dress up themed event, this is always very popular, we are also giving people a chance to pace, so are looking for pacers every 2 minutes from 19 - 39 and a run/walk pacer

9th November - Everyone has a pair of brightly coloured snazzy socks right? Let's brighten up a cold November day by wearing your most outrageous coloured socks!

21st December - Our main Christmas themed dress up event, and maybe a bit of music to get us in the Christmas mood

we would also like to have a pacing event, this time even numbers every 2 minutes from 18-40 and a run/walk pacer

25th December (Christmas Day) 9am start - What a wonderful way to start Christmas day before tucking into the turkey and chocs! This is always a really special run with a fabulous atmosphere, a lovely way to start the day

1st January (New Years Day) 10.30am start - What a brilliant way to start 2020, this is the only day of the year that you can run/walk at 2 different parkrun's and get results for both, please travel carefully if you are thinking of doing a double parkrun.

Please find the link to the Christmas/New Year compendium, this is where events declare whether they are hosting an event on Christmas and New Years Day, there is no expectation from HQ, it is down to individual events to decide, and we have until December 17th to declare!

We hope you can all join us for some or all of these events, if you have any questions/would like to volunteer please email us leeonthesolent@parkrun.com

Great job to everyone who did parkrun this morning. It was hot, with not much wind - as even the birds realised, so a big round of applause to the 32 people who got a PB today (which includes me). 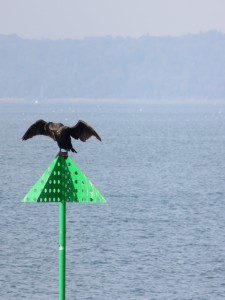 THANK YOU TO THE VOLUNTEERS … GOOD WORK EVERYONE.

My home parkrun is Woodley, that I run with my Dad, but I was visiting so I came to Lee-on-the-Solent – one of 11 park runs I‘ve done. Lee-on-Solent parkrun has changed a bit since I last came, in 2017. 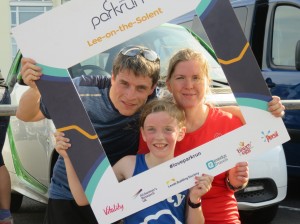 Lee-on-the-Solent has a busy start but everyone spaced out quickly for space to run – and I took to the beach a bit at the start. I have been to some parkruns with even busier starts (like Dinton, which has narrow woods). Lee-on-the-Solent also has two different surfaces, a little shingle but mostly tarmac, so a pretty easy run surface (Prospect is almost all grass so slow). I love it when people cheer me on because it is so encouraging and will always gives you a slight sprint for the end you can always find a bit more energy! That’s why I almost always wear my vest with my name on – thanks to everyone who gave me a shout. Also dogs do parkruns and I LOVE dogs. It is good for them to get used to big crowds and it gives them lots of exercise which is so good for them too. 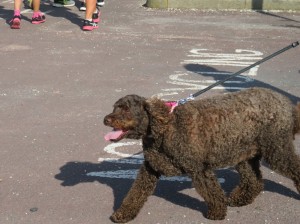 If it is hot you can go in the sea to cool off, you could even go for a swim! But it could be cold in there. If you forgot your barcode you will not receive a time. 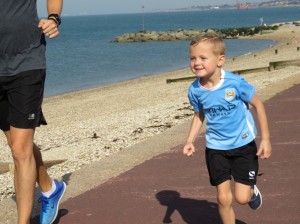 I started running by doing kids parkruns 3 years ago, I found a talent and something I really enjoy. After a few months of running I’d started to do adult parkruns too and I’ve run 70 now, and I’ve recently joined an athletics club to improve even more. Do you have children? You can take them to junior parkrun! It is 2km run for kids from 4 years old to 14 years old. I did one on Sunday at Stokes Bay in Gosport and really enjoyed it. Adults can run with your children but don’t go through the finish funnel. Your children/child can’t be last because of the “tail walker”.

Remember your barcode for next week’s run.

Hope you enjoyed parkrun this week