If parkrun had been around in 1974-9, Lloyd parkrun would have been my local venue. When I was four, we moved to a semi on Addiscombe Road, almost opposite Trinity School, next to the bus stop; people used constantly to chuck their crisp packets and sweet wrappers over our hedge, which irritated our garden-loving but easily irritated father a great deal. It was the era of Bazooka Joe chewing gum, square crisps and - the latest fad – Smurfs merchandise from the petrol station. Even in the era before Health and Safety, playing cricket in the small garden, where sixes were regularly hit over the garage and over the road, requiring the fielder to dash across the busy A232 to retrieve the ball, even then that struck my parents as a tad dangerous and so my older brother and I used to be packed off to Lloyd Park to play there (there was a lot of sunshine in 1976 and Big Bob Willis was the man). Sadly, we moved away when I was nine and I’ve barely been back since.

I wasn’t supposed to be at Lloyd parkrun this morning either, I was supposed to be at Beckenham Place parkrun where I was meeting a friend. However, after leaving my home, 10 miles north of Oxford, at 06.40, the fog was so heavy and visibility so poor on the motorway that I was delayed. At quarter to nine I was crossing the tram tracks at Sandilands and I realized my Beckenham plan was doomed. What followed was the parkrun tourist’s equivalent of a white-knuckle ride. I dug deep into the memories of my early childhood to navigate myself to the car park of Lloyd, followed likely apricot-shirted parkrun suspects to what was evidently the start and joined the first timers briefing half-way through. Thrills and spills and I hadn’t even started running! The fog was still thick when we gathered at the start and made the home-made signs with phrases like ‘silence please’ and ‘beware the tree roots’ seem almost biblical, as they were held aloft in the mist. Since tree roots are my running nemesis, I took this one particularly seriously. I have cracked a rib and concussed myself in various tree root trips and, at Gnoll parkrun near Swansea, I managed to fall over the very tree root section that we had been warned to avoid, thinking, as I flew through the air, ‘ah yes, they told us about this, what an idiot’, before crashing to the ground, ripping my hand, needing the first aid kit and achieving my parkrun Personal Worst time of 53.41 (because, of course, I still had to finish).

Lloyd parkrun is a nice size at just under 200 people, not too crowded but not too lonely either. The course is definitely undulating; I always tell myself when puffing uphill, that this means there will be lovely downhill sections and, in a two lapper, I’ll get to enjoy them twice (let’s gloss over the fact that the hilly bits must be toiled up twice also). The volunteers were not only very friendly, it was great to be able to see them with their hi-viz jackets in the mist and it was good to see several of the aforementioned tree roots were painted pink also. I managed not to fall over, despite not having time to change into my trail shoes in my sprint to the start. Had a great time, thank you Lloyd parkrun team; I was lucky that there was a 30-minute pacer, which (though I couldn’t keep up with him, I need a longer tarmac section to get sub 30 at the moment) was an orange blob in the distance to keep me motivated.

But, of course, this is just one person’s parkrun moment. Much more importantly, there was the usual inspiring crowd of parkrun milestone and volunteer t-shirts of all ages, all shapes and sizes and all speeds but with one shared enjoyment. James Lyne ran his 100th parkrun and celebrated in style by bagging a PB and his first sub-17 time at Lloyd (one of only 15 men to have gone sub-17 at Lloyd) Rosie Stevens ran her 100th today as well, after being Run Director last week, and Vanessa Wheeler ran in the London Marathon shirt she earned last week (she was pointed out to me by Run Director, Debra Bourne at the end, and I was impressed at how she still looked full of energy). Speaking of Debra, when we got talking, I discovered that she wrote ‘parkrun: Much more than just a run in the park’ – a book I’ve read and really enjoyed – I was about to ask her to sign my barcode when I remembered I had to dash on to the café at Beckenham Place Park to meet the friend I hadn’t run with after all. Later, as I drove home, past the site of the old Ashburton Library that I used to walk to every Saturday and the Shirley Park shops where my mother and I once stood next to Ronnie Corbett and his wife at the deli, it seemed only right that Pick of the Pops on Radio 2 had selected 1977 to play tunes from this week, and that my favourite band aged 8, Abba, was at Number 1 with ‘Dancing Queen’. I’m not one of those, but at least I wasn’t a root tripper in my run down memory lane. 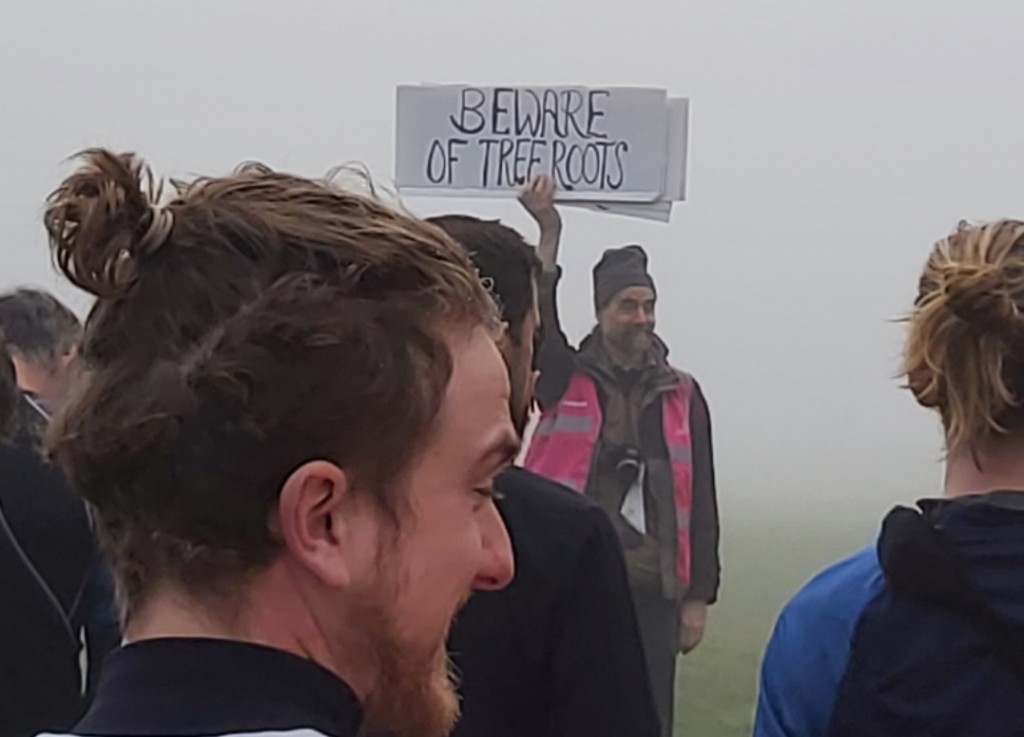 Now for the stats bits:

There were 188 people who ran, jogged and walked the course, of whom 24 were first timers and 29 recorded new Personal Bests. Representatives of 16 different clubs took part.

James Lyne (South London Harriers) led the pack home in a PB of 16:56, followed by clubmate George Ogden in 17:28 and Oliver Hayward in 19:36 in his first parkrun!

Next week, Event Director Debra Bourne is away running 100 miles. Rosey Stevens will be Run Director and all volunteering positions other than Tail Walker are available, so please sign up! (Email Lloyd@parkrun.com to volunteer).

On Saturday 2nd October 2021, I jogged through the park with my husband and one of my nieces to my local parkrun and found a place in the crowd of several hundred runners to run my 107th parkrun – at Heaton parkrun in Manchester. This would have been my home parkrun if I had never left home, and I always enjoy running there when I’m in Manchester visiting family – helped by the fact that my stepmother’s house is only about 1.5 miles from the start line.

Andrew Crossley was wearing his recently-earned 500 parkruns shirt for the first time – our first Lloyd parkrunner to reach this goal (with 323 of those parkruns having been completed at Lloyd) although several others are getting quite close. Meanwhile, 24 runners ran their first Lloyd parkrun (for some, their first ever parkrun) and 20 people ran PBs.

Antara Singh (Croydon Harriers) led the women home in 23:50, followed by Patroulla Lorke (Emmanuel Runners) in 25:02 and Sophie Griffiths in 25:24.

Our oldest finisher was in the 80-84 years age group, so well done to Ian Cayzer (Zero to Hero Runners), and our youngest runners, Hazel Siu and Thomas Finch, were both in the J10 age group. Interestingly, we had parkrunners completing the course in all the age groups between those except for 15-17!

I’m not sure what was in the air for the 516th Lloyd parkrun, but 11 of the first 20 parkrunners home ran PBs, as did a further 32 of our runners. Erik Schrijnemaekers, a regular member of the set-up crew, and this week also scanning barcodes after running, was delighted with his PB on his 100th Lloyd parkrun – his first parkrun PB with us in three years, showing you should never give up hope.

First to the finish funnel was George Ogden (South London Harriers) in 17:46, followed by Matthew Shires in a PB of 18:44 and Matthew Stone (Striders of Croydon) in 19:19.

I spent the morning of Saturday 18th September a few hundred miles away, running the Keswick to Barrow Challenge. This is really a challenge walk, of 40 miles, but runners are allowed, and I was in a team with a group of friends, all of whom had previously run the 90km Comrades Marathon in South Africa. Given that that race had been cancelled in both 2020 and in this centenary year of 2021, it was great to meet up with each other again for the first time since 2019 or in my case 2018. My only regret is that there are far fewer parkruns in Cumbria than in the Croydon area, and there wasn’t one that I could run along the route.

First home was George Ogden (South London Harriers) in 18:01, followed by Flo Sivz in 18:43 and Krzysztof Klidzia in 19:12. Krzysztof used to run with us quite regularly, but has moved away from Croydon down to Folkestone and now runs for Folkestone Running Club. First woman to finish was Rachel Lindley (Striders of Croydon), followed by Sophie Gibson (Oxted Runners) in a PB of 23:53 and Carrie Day in 24:35.

After three weeks with more than 200 runners, this week numbers dropped a little to 188. This was possibly at least partly related to Brighton Marathon tomorrow – good luck to anyone running it. However, we also had at least two visitors who had been due to head for Brighton this morning but were prevented by train problems at East Croydon, so hopped on the tram to us instead to get their parkrun fix. In all we had 21 first-time runners – actually more, as we had several runners without barcodes. I do hope they manage to get themselves registered so they can get official results in the future.

Nearly a quarter of runners who were -not- running the course for the first time (and did have their barcode for scanning) managed PBs today: a whopping 40/167. Congratulations to all.

Of the first three runners home, all of whom have run more than 100 parkruns, two ran PBs: Craig Purle who finished second in 17:57 and Alex Lyne (South London Harriers) third in 18:19, while George Ogden (also SLH), first home, ran 17:28, just 11 seconds outside his PB.

For the ladies there were also two PBs in the first three finishers: junior Zoha Jetha led the way in a PB of 22:50, followed by Leanne Moore (Croydon Harriers) in 23:32 and Cindy Woo (Holy Trinity Church Wallington) in a PB of 24:19.

The disc golf people were having a special event of some sort and there were lots of them out in the park, but no Frisbee-runner collisions, thankfully.

No parkrun can happen without plenty of volunteers. With a couple of extra people offering yesterday and this morning, we did fine, but as some of you may have seen, we were very short of volunteers until Thursday evening and still short by Friday lunchtime. This is NOT good for my stress levels! PLEASE OFFER TO VOLUNTEER – and as much in advance of the run as possible. I’m particularly keen on getting volunteers all sorted in plenty of time for next Saturday (18th September) as I will be away.