Little did I know how much parkrun would change my life when I first lined up to start at Lytham Hall on 1st April 2017. Since then I have run 178 times at 51 locations in 4 different countries, completed the alphabet challenge, made some wonderful friends and had a role as Grant Ambassador for parkrun Australia. It took me a while to start volunteering, starting with marshalling then run report writing, all the roles around the finish funnel, tail walking, junior parkrun and the first timers brief. Finally today I felt confident enough to have a go at being Run Director on my 83rd time volunteering.

So how was it? The weather was as good as it gets in November. There were plenty of experienced volunteers and event director Kirsten to guide me. I think I managed to get most of the important points across in the run brief including next week’s cancellation(20th November), we avoided a false start and no incidents were reported to me. Yes, it was a good experience and yes, I would do it again. 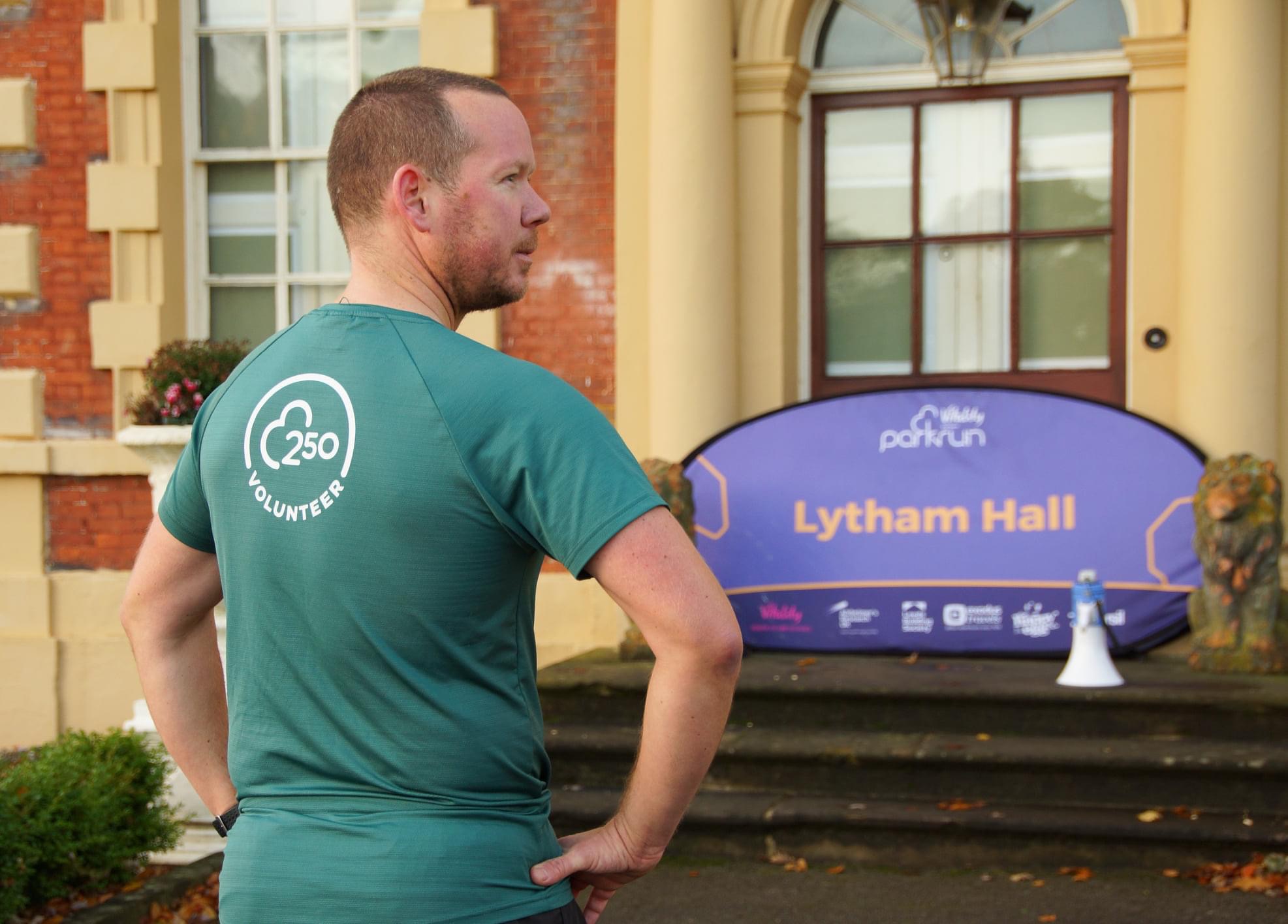 All the milestone achievements at event number 217 were for volunteering. Neil Tate got his 300th credit for helping with set up whilst June Brocklebank got to 50 marshalling in her now usual spot at Forest Gate and Jacob Ryott made it to 25 credits. Kirsten Burnett got to 249 volunteer episodes (she got to 250 the next day at junior parkrun). Did you know that you can now buy parkrun volunteer T shirts after 10 (white – juniors only), 25 (purple), 50 (red), 100 (black), 250 (green as worn by Neil) and 500 (blue) on-line from pro-direct running. They are another great reason to volunteer. 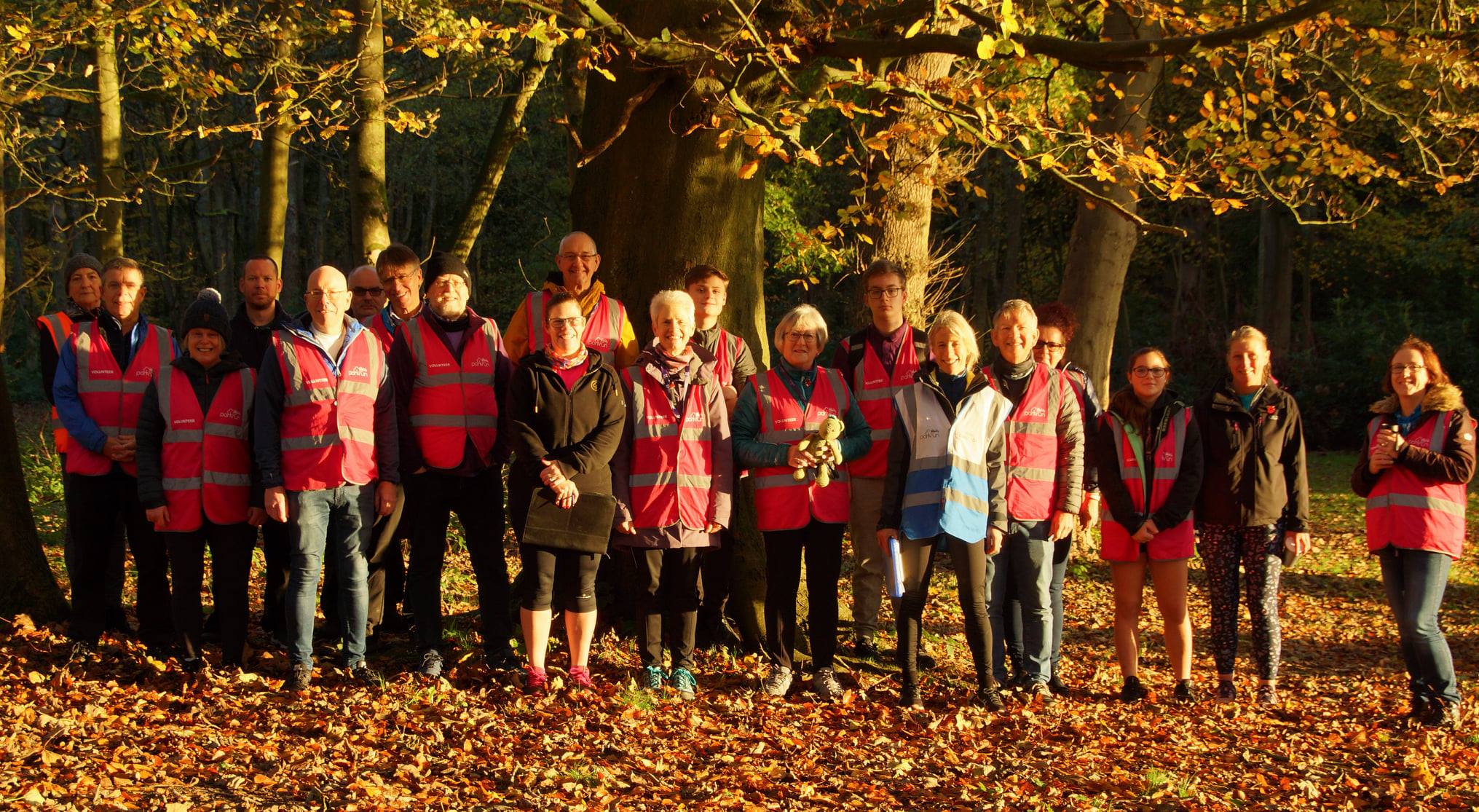 In addition to almost perfect running conditions there was a stunning beautiful autumn setting with the leaves on the trees having shades of yellow, orange, red and brown. This week 216 people ran, jogged and walked the course, of whom 30 were first timers with 16 of these running their first ever parkrun. There were visitors from places that included Glasgow, Preston, Falkirk, Wilmslow and Scarborough. A brilliant 19 participants recorded new Personal Bests and representatives of 26 different clubs took part.

The event was made possible by a top top team of 35 volunteers who made my job as run director so easy:

On Saturday it was lovely to see Lytham Hall parkrun busy again with 236 participants. There were milestones aplenty, tourists, first timers, two couch to 5k running groups, 21 personal bests and even a pair of lost trainers. 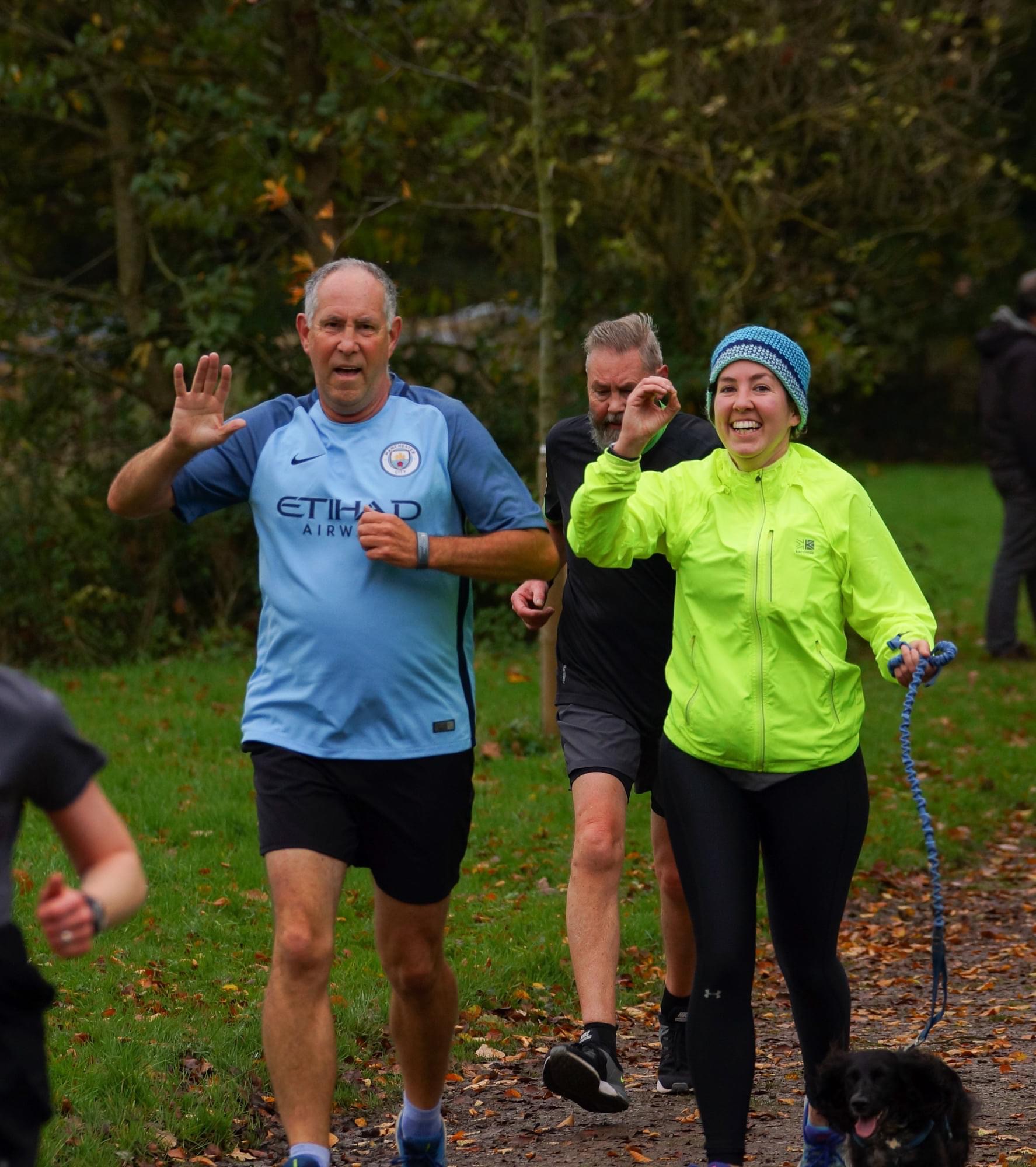 There were also four new members of the 100 club. Congratulations and black shirts are due to Bill Neilson, Malcolm Glen-Bott, Jade Cosgrove and Dawn Baron. Sadly I didn’t get to speak to Bill, Jade or Dawn but I did chat to Malcolm. 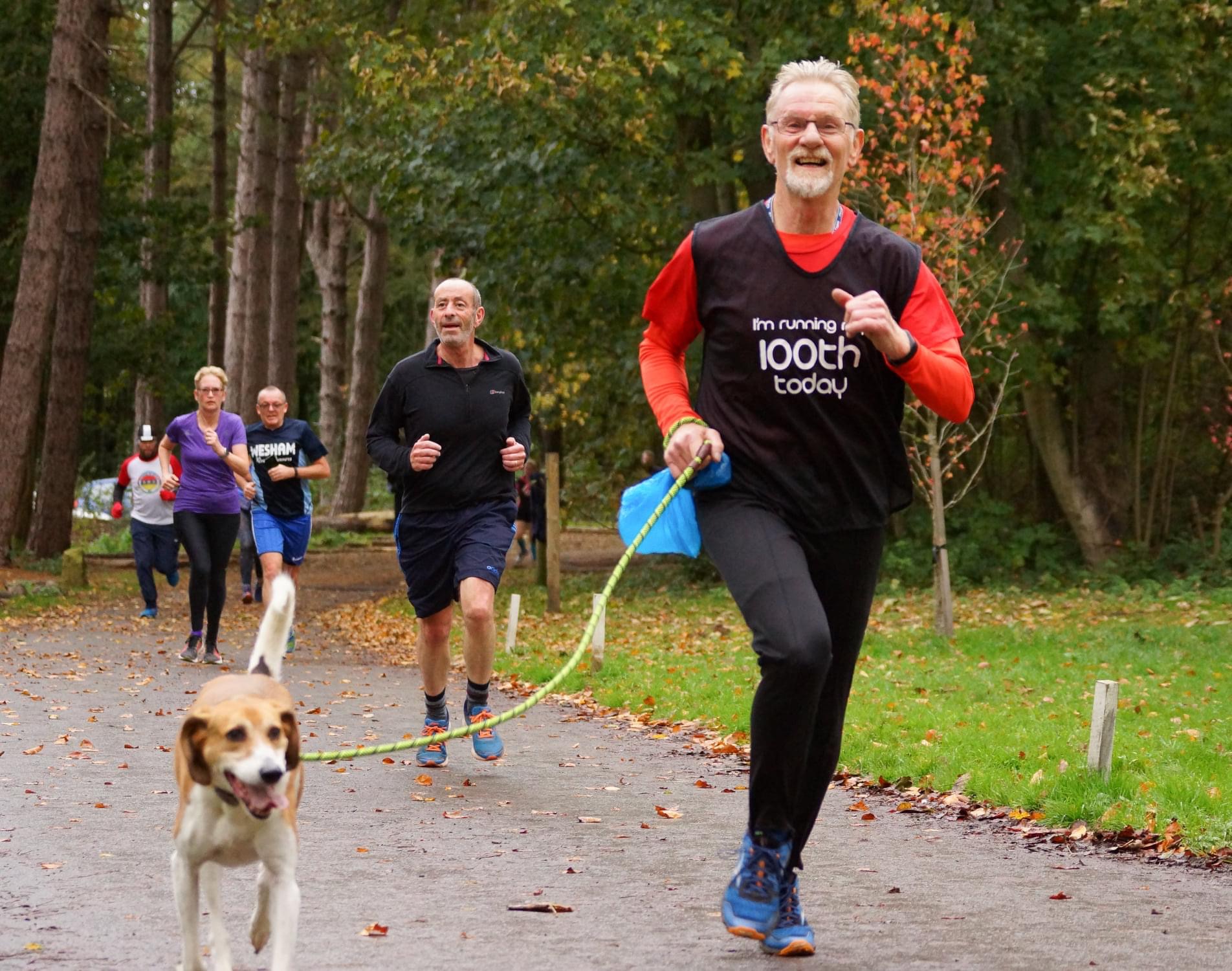 I know Malcolm because he is a regular volunteer for token sorting. He often helps with set up too as “it uses up the time between breakfast and the start of parkrun.” Malcolm also has a problem solving role within the team - responsible for constructing both the wooden token sorting device and the parkrun equipment cart. Malcolm has always been a runner. He has been parkrunning since 2016 as he prefers running with others. Malcolm’s proudest running achievement was completing the Freckleton Half Marathon in 73 minutes back in 1983.

parkrunners visited us from Edinburgh, St Helen’s, Somerset, Whitley Bay and Leeds.   In my opinion tourist parkruns are fun - it’s interesting to run a different course. You can also try to complete some parkrun challenges - did you know that Lytham was one of the 12 ‘Hall’ parkruns in the That’s Hall Folks/Great Halls of Fire challenge? Saturday 20th November is when Lytham Hall parkrun is next cancelled so you’ll need to get travelling if you want to parkrun that day.

There were 14 people running their first ever parkrun. Some of these were from the two Couch to 5k groups. Those from Lytham St Annes Road Runners were doing their 20 minute run whilst the stars from Wesham Road Runners ran continuously as they were graduating having completed the program. Well done to all the newbies.

Lytham Hall parkrun was only possible due to these 35 volunteers:

It was a gloomy, damp morning. It seems that some ghostly ghouls and creatures of the night had been up to mischief and added a whole host of extra water features around the Lytham Hall parkrun in the form of pools and puddles. And if you looked carefully, some of these spooky creatures were still around, hiding under the trees, masquerading as volunteers and runners, just to see just how soggy and splashed we were as a result of all their handiwork. 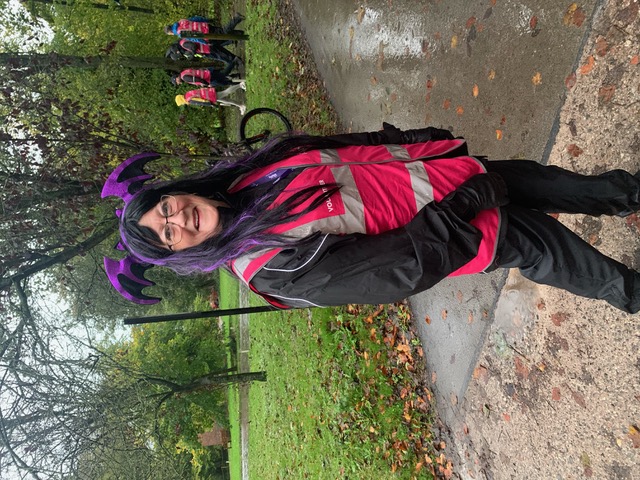 However, this didn’t deter the 115 eager parkrunners who cheerfully splashed their way through the puddles. Despite the conditions, two people even managed to get a PB! Well done Elina Vaudrey and Jan Short. 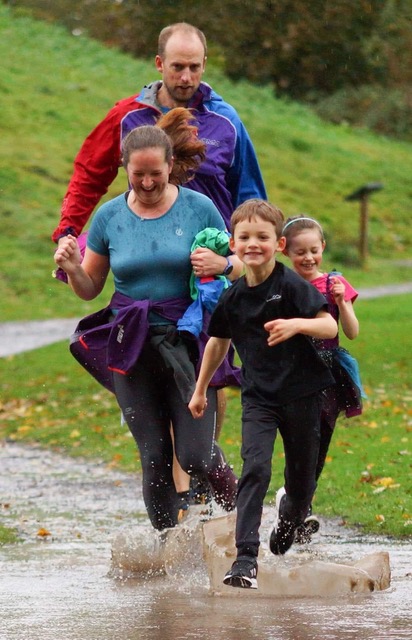 You have to admire the determination of the six runners who were there for their very first parkrun. Please come back again, it’s not normally so damp. We also had nineteen parkrunners visiting Lytham Hall for the first time. This included visitors from London, representing Bushey Park (the home of parkrun) and Crystal Palace Fun Runners as well as runners from Ramsbottom Running Club, Ackworth Road Runners, Trent Park, and Acre Street Runners.

Extra credit must go to the more than thirty volunteers who made this week’s event happen. Especially those who arrived in the dark, accompanied by torrential rain to set up the course. We can’t do without our volunteers, so please take a look at our upcoming volunteer rota to see if you can help out. A one in ten volunteer to running ratio means that we can keep our parkrun going. 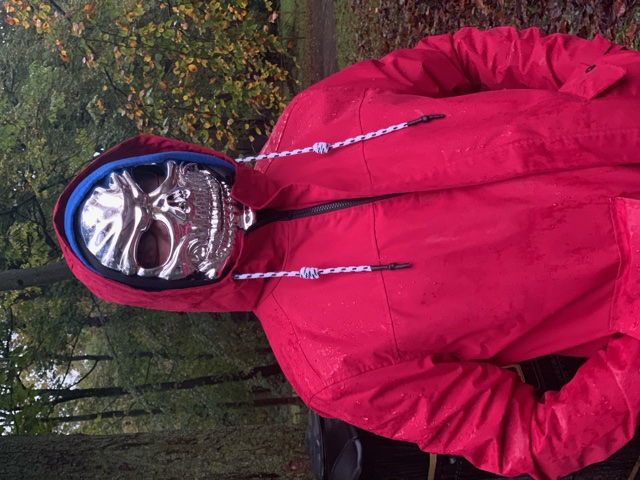 Congratulations to Kevan Buckley and Bob Vass on achieving your 25th parkrun milestone. You can now officially claim your first parkrun T-shirts. There are a few milestone runs coming up, we can’t wait to see Bryan Clarke achieve his 50th next week.

Regular parkrunner Chris Middleton has been raising money for Breast Cancer Now by completing 100km in October, and we are delighted he chose our parkrun to complete his challenge and has raised over £400 so far. 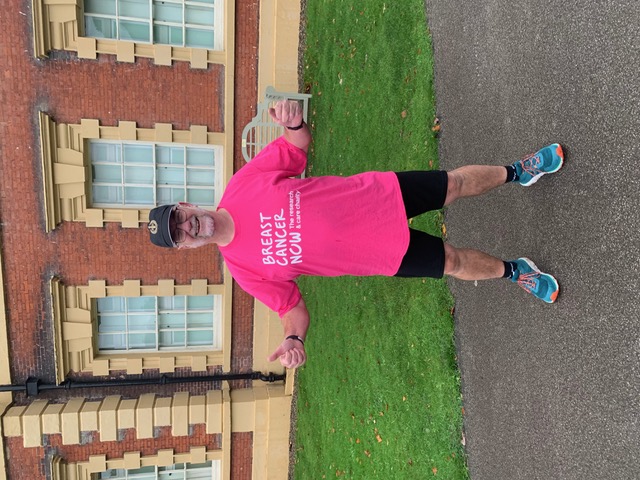 As it was the last Saturday of the month, we were also delighted to welcome the 5k Your Way Move Against Cancer group. This is an initiative to encourage those living with and beyond cancer; families, friends and those working in cancer services to walk, jog, run, cheer or volunteer at a local parkrun event on the last Saturday of every month.

This week 115 people ran, jogged and walked the course, of whom 25 were first timers and 2 recorded new Personal Bests. Representatives of 23 different clubs took part.

Sometimes, I am fortunate enough to deliver the First Timers’ Briefing at Lytham Hall (yes, you’ve probably heard me rounding up the newbies!). As well as doing our best to put first time ever parkrunners at their ease, it’s great to be able to welcome a selection of parkrun tourists to our fabulous course. 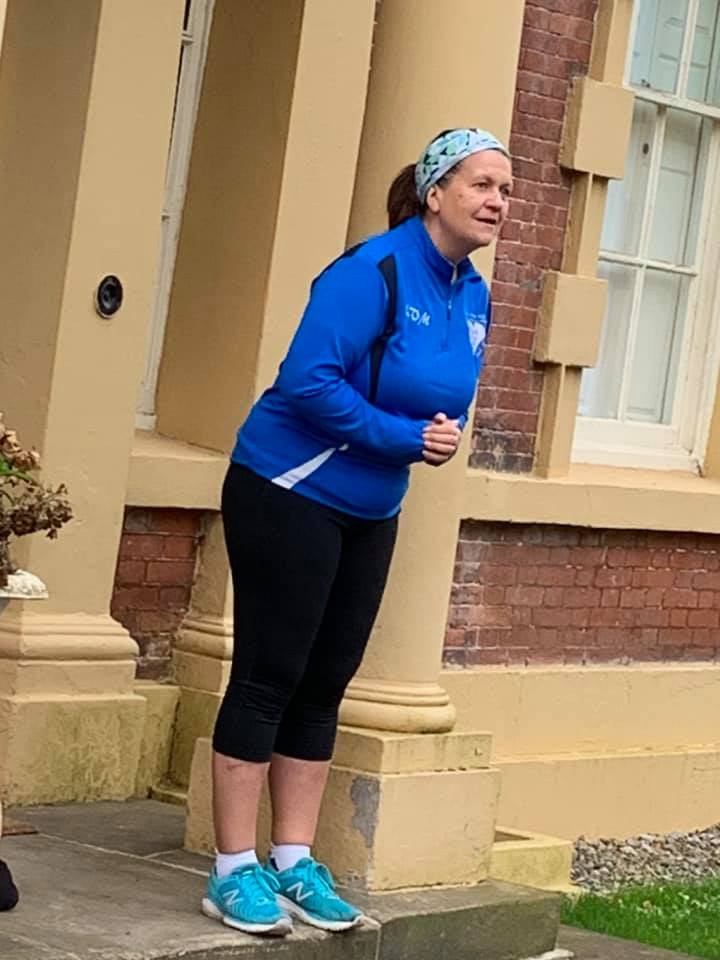 So, what makes Lytham Hall such a special parkrun? Well, one of the most popular features is that our course is largely flat. This is much appreciated by visitors from hillier places (but leaves me woefully underprepared when I do some parkrun tourism and come across those pesky inclines).  We are lucky to have the grounds largely to ourselves early on a Saturday morning. 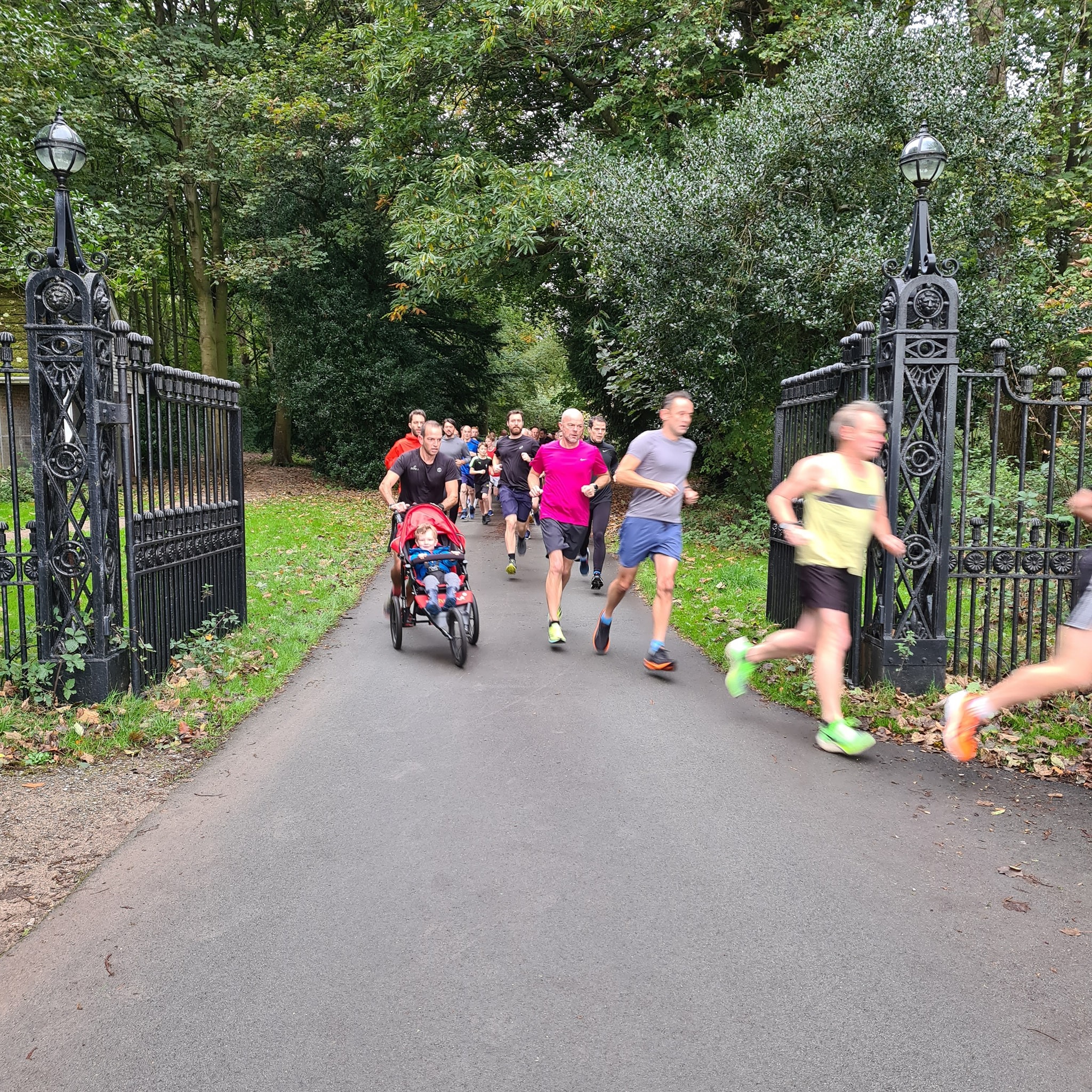 We also have our brilliant hi-viz heroes (over 30 this week) who help encourage us on our way round with cheers, applause and even a bit of music. 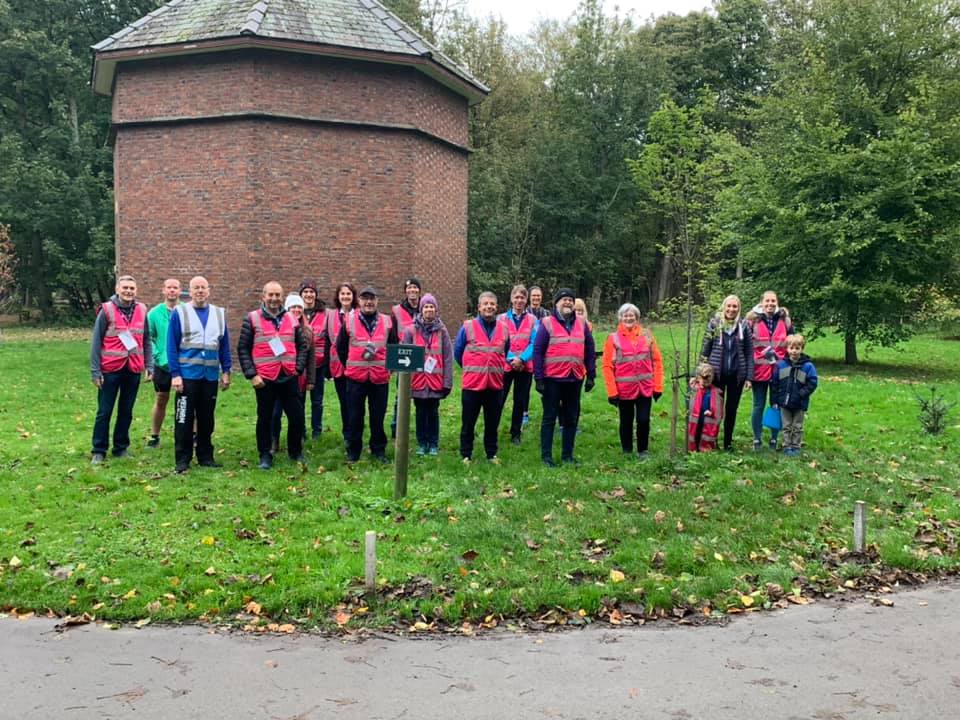 Considering we are so close to the coast, our route is pretty sheltered, and the mix of tarmac and woodland paths make for an interesting run. We also have lovely scenery, ponds and statues to admire, and we must be one of very few parkruns where you can go and visit pigs, giant rabbits and pygmy goats at the end of your run. The abundance of trees might also be the reason that your watch might be telling you that you didn’t quite run 5k, but rest assured, we know that you completed the distance.

Of course, one of the delights of Lytham Hall parkrun comes at the end of your run, when you can pay a well-earned visit to the Tea Rooms for delicious breakfast barms or yummy cakes.  The post parkrun brews and chats can bring a lot of fun and good humour and add to the post run glow, whatever your time was.

Elsewhere Forest Bear was doing a bit of parkrun tourism with Juli Wiseman and Sue Henry. We were a bit worried he'd got into a bit of trouble, but apparently the photo was for a worthwhile charitable cause. Phew! 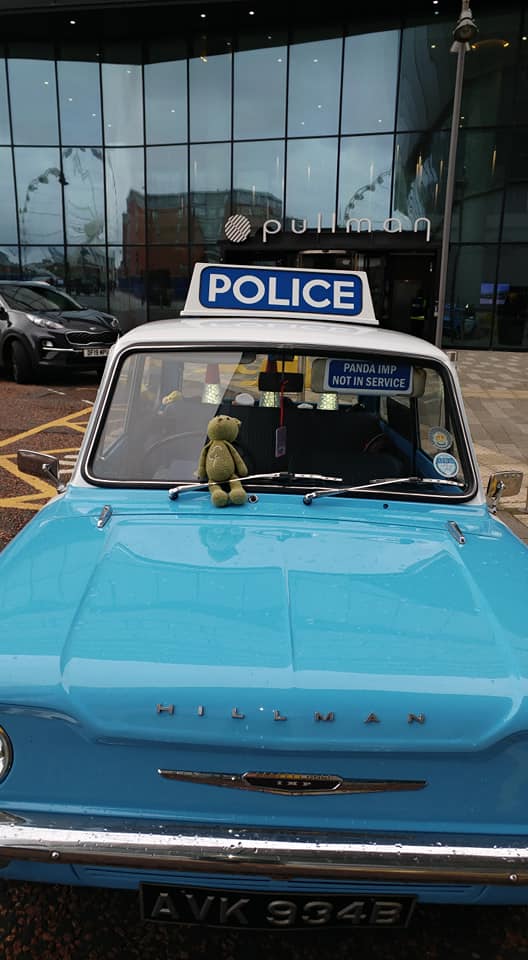 Congratulations to junior runner Rowan Edwards who completed his milestone 10th parkrun with a PB, and Mark Johnstone on his 25th parkrun.  A total of 22 runners earned PBs this week.

Thanks to this week's volunteers

When I realised that I was writing a run report on Oscar Wilde’s birthday I thought I’d look for an appropriate quote. ‘Be yourself; everyone else is already taken’ seemed suitable to me. Whilst it may never replace ‘Have fun!’ at Lytham it does reflect the inclusive nature of parkrun, that everybody is made welcome at parkrun and in reality you are only competing against yourself.

It was a cloudy, slightly chilly morning – perfect conditions for running but less ideal for volunteers. The advice of ‘no snot rockets’ received the most reaction from the listeners to RD Sharon’s run briefing. As if we would do that in Lytham? Visitors were welcomed with the furthest ones identified to be from Gloucester. Gill Draper was acknowledged as running her 100th parkrun and donned the milestone vest for her 5km (more about Gill later). There were two other landmark runners, Alistair Brown (PB) and Mike Thompson, both achieving their 50th parkrun.

My recollection of the actual parkrun may be vague as I had already completed a longer and faster than usual warm up run. The most memorable aspects were hearing the music of Whitney Houston twice at Lily Pond, the cheers from the marshals and chatting to Sue Hart and Craig McIntyre during the run. Last week I had been grumpy during my run (it was tough) so this week I was determined to smile and have fun. It was a much better experience. It is good to not to put pressure on yourself, compare yourself to other runners or go hard every time. I had listened Oscar’s advice

Gill Draper was the star of Lytham Hall parkrun number 213. It was Gill’s 100th parkrun. This feat has taken longer than anticipated due to pregnancy and the pandemic. The majority of her parkruns (81) have been at Lytham. When asked about her favourite other parkrun, Gill told me about Rothay Park parkrun in Ambleside. It is a newish event, scenic and flat – sounds worth a visit. Gill celebrated her milestone run by finishing first female and recording her fastest time this year. 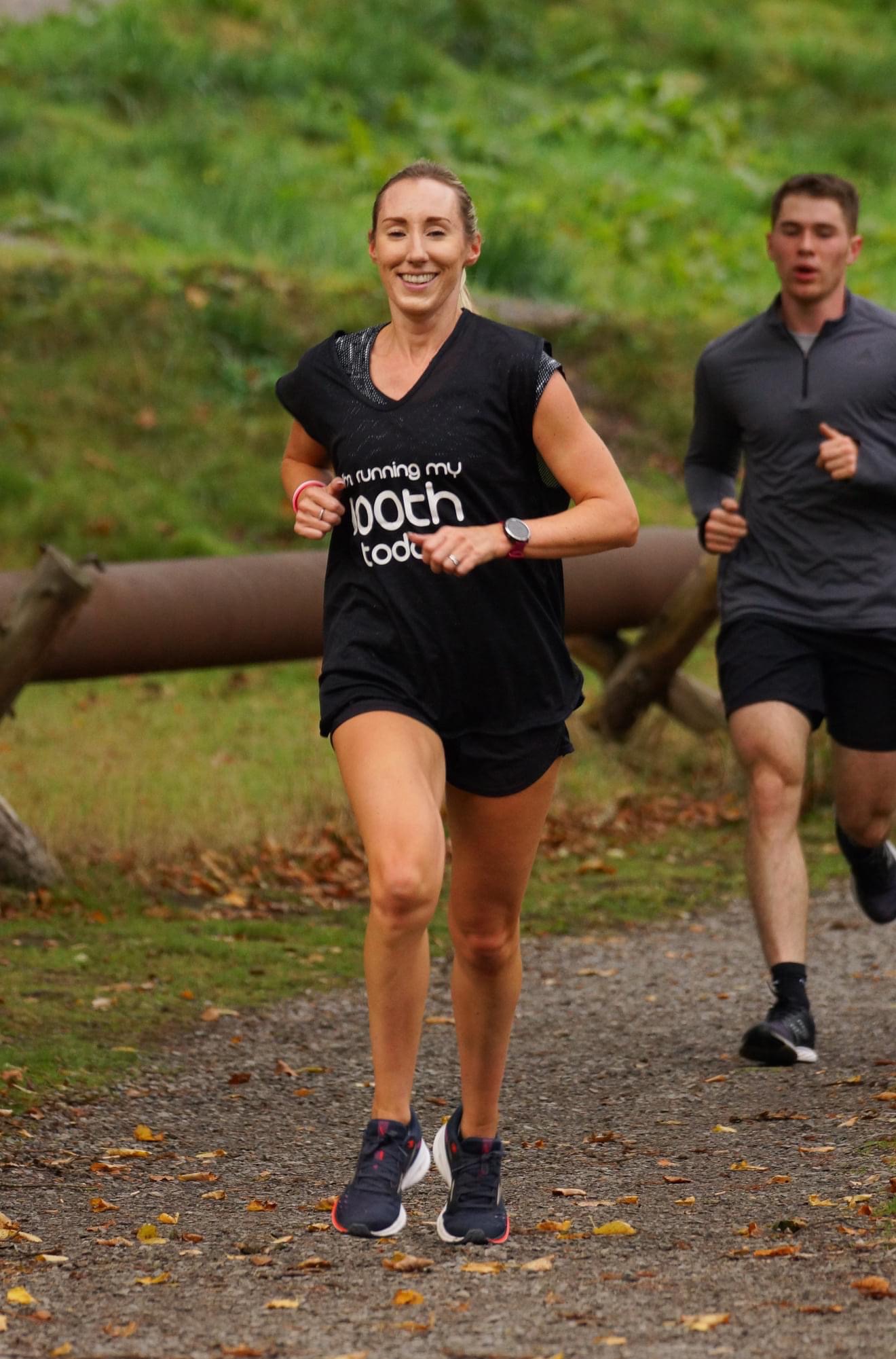 Finally the statistics - 206 people ran, jogged and walked the course, of whom 21 were first timers (6 of these were completing their first ever parkrun). There were 23 new Personal Bests reported. Representatives of 18 different clubs took part.

The event was made possible by 32 awesome volunteers who were: