Many thanks for this week's run report which is written by voluntourist Simon Grigor who is a Run Director at Harrow parkrun. Simon also did some barcode scanning for us after his run.

My buddy Paul Ashton had once been to a parkrun before; in March 2019, at Himmel Park, Tucson, Arizona. We were holidaying in the city and he kindly gave me a lift to and from the park to enable me to get a ‘foreign tourist’ fix. He can be seen here offering his ‘support’ while I am in my usual post-run knackered state. 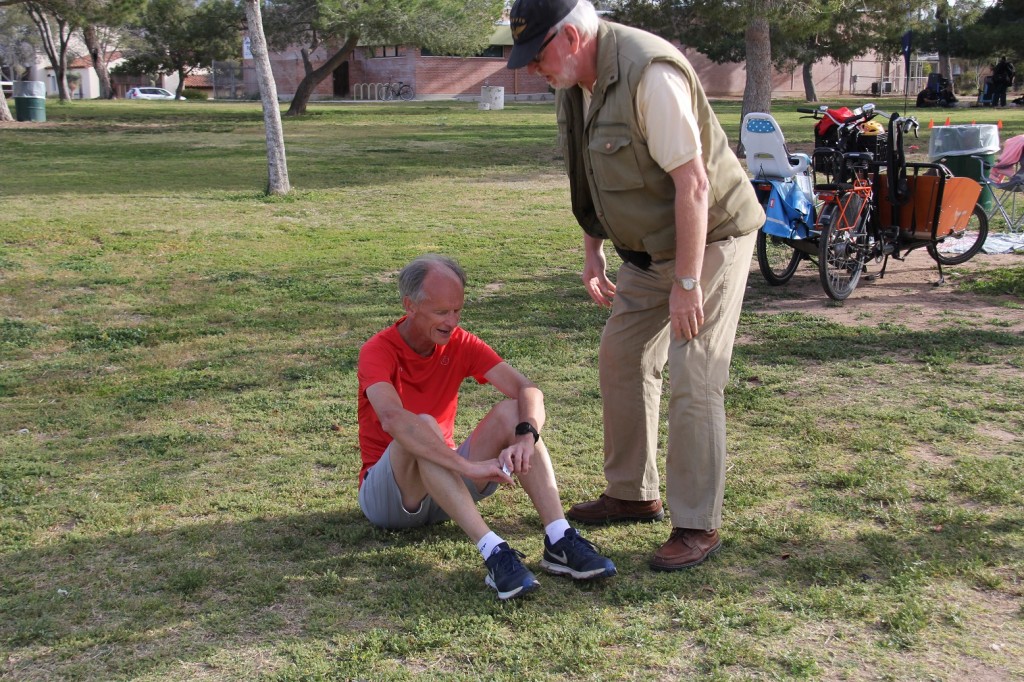 I wouldn’t have imagined then that Paul might ever do parkrun himself but, when we met up a couple of weeks back, he revealed to me that he has lost two stone during lockdown, completed the ‘couch to 5k’ programme, and had registered for parkrun and printed off his barcode. Paul lives in Maidenhead, and today was to be the big day. I said I would come to support and celebrate.

Alas, on Friday, the eve of the big day, his phone went ‘ping’. He was another victim of the ‘you have been in contact with…’ craze (not!) that has been sweeping the nation. Isolation for him, poor man. Please give him a welcome when he is allowed out and makes his first appearance in a week or two.

But I had already arranged to come along, and having walked through the truly magnificent leisure centre (and used their immaculately clean toilet) I found myself near the start-line, and getting a warm welcome from Run Director Nick and his partner Juli.

And what a nice course you have! The paths through the woods are lovely, though I imagine there’s a bit of mud about in the winter. Your hill, though a shorty, is a steep little bu**er too, though the marshal at the top of it was full of encouraging words.

316 parkrunners took part today. That included 22 folk doing their first parkrun: hope you all enjoyed the experience and will return, either to Maidenhead or another venue – remember your barcode ‘admits’ you to any parkrun in the world! And there were tourists aplenty too. I was one, and among the others, I spoke to Katie David and Andy Livsey, who’d come down from East Anglia, seen a show in Windsor last night before running today, and Steve Turvey from Coventry, wearing his ‘250 parkruns’ shirt but doing Maidenhead for the first time.

There were a few milestones being celebrated today: Anna Richards, Margaret Carlyle and Sammy March all completed their 50th parkruns, and David Pollard his 200th . Well done all of them.

First home today was a local, Adam Bennett, celebrating his 201 st parkrun with a time of 19:35, and another local, Kirsty Matthews, was first female in 20:42.

A wonderful volunteer team marshalled the runners round the path and saw us safely through the finish: thank you to them all. Parkrun relies on volunteers and if you are able to have a break from running to help out in the coming weeks, the team at Maidenhead would be delighted to hear from you. As a regular Run Director at my home parkrun (Harrow) I can recommend the non-running bit of parkrun as good fun too. In fact I am RD there next Saturday – anyone turning up and mentioning ‘Maidenhead’ will get VIP treatment!

Finally, everyone I’m sure sends ‘get well soon’ wishes to Ruth Hill, who ended her parkrun today with a nasty fall at the finish, and had to be helped away in a wheelchair. Hope you’re back on the start-line very soon, Ruth!

This week 316 people ran, jogged and walked the course, of whom 45 were first timers and 52 recorded new Personal Bests. Representatives of 25 different clubs took part.