Grown men in bright tights, flashes of red and green amongst the crowd and marshals adorned in red hats and even ringing bells….it must be the last parkrun before Santa.  I should have known really, the festive weather was a giveaway, a balmy seven degrees, damp in the air and drizzle at the halfway point!! (Note to self, perhaps leave the ‘White Christmas’ bet until next year.) 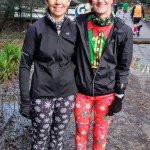 It was my 50th parkrun of the year today (gold obsessive secured). It has been a wonderful journey around the South West and South Wales with occasional sorties further afield and even abroad, taking me to places I would perhaps not even have thought of visiting.  However come rain or come shine there has always been something worth seeing and certainly many new friends to be made. Even today I was amazed to meet again Julie and Mark a couple we met earlier in the year at the Mura di Lucca parkrun in Italy, the parkrun world really is a small world. 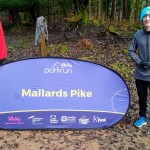 Today I was running with my son, an occasional parkrunner, so not for me the mad rush, sweat and burning chest of trying for a fast time but a more sedate jog (and occasional walk) around the course and that was no bad thing.  The less than perfect weather could not spoil the natural beauty of the place and the pace of the run gave me more time to take it all in. It also gave opportunity to better thank the marshals than my usual breathless utterances and even offered time to debate whether it really was ‘all downhill from here to the finish’. 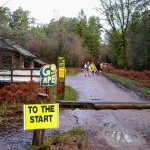 The mood of the parkrun was relaxed but well organised.  Good signposting to the start and a business like run brief which ticked all the boxes without meandering as some elsewhere have been known to do!!  The good contingent of runners with dogs stood well away from the brief so that enthusiastic barks did not distract from the brief. The course itself was pretty much as advertised broad and firm under foot, little chance here of cancellation due to flooding with the first half of the run making its way upward in keeping with the surrounding terrain. The welcome descent that followed was only interrupted by a short kick back up as we made for the finish funnel.  In short, a quick no nonsense one lapper set in beautiful woodland. Well worth a revisit, perhaps on a warmer dryer day.

There were 62 first timers to Mallards Pike today but a special shout out to Leo Osborne who was starting his first senior parkrun, well done Leo and may it be the first of many.

It goes without saying (but I will say it anyway) any parkrun is only there by gift of the volunteers who make it possible.  The team today, like most I have met, were friendly and enthusiastic from the run director Simon, who positioned himself at the carpark edge to greet and guide runners to the start, to each and every marshal who encouraged us around the course,  urged one final push to the finish, clicked a stopwatch or scanned a barcode. On behalf of myself and my fellow parkrunners I thank you, your time and work is appreciated. 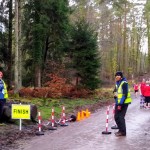 This week 112 people ran, jogged and walked the course, of whom 62 were first timers and 26 recorded new Personal Bests. Representatives of 26 different clubs took part.

The event was made possible by 14 volunteers:

Today's full results and a complete event history can be found on the Mallards Pike parkrun Results Page.

Mallards Pike parkrun started on 31st August 2019. Since then 961 participants have completed 1,398 parkruns covering a total distance of 6,990 km, including 176 new Personal Bests. A total of 100 individuals have volunteered 239 times.