This parkrun event was an unexpected bonus - we had scheduled a cancellation because of a planned funfair on the Common.   But the funfair was cancelled at short notice, and we were on again - but it would only have been possible because so many of you offered at short notice to volunteer - and we were able to go ahead.  So many thanks to you all!

The day dawned a little misty, and our small setup team were out early setting out the course.   It's always rather pleasant being out on the Common early on Saturday morning, expectation in the air - how will our parkrun be today?      Oh-oh - what's this?   Two large pigeon lorries parked on the track to our parking area.    Oh well, no problem - we'll ask them to park on one side so we can get by.   Not so simple - the drivers were in a statutory rest period, and could not drive, not even a few metres - otherwise the vehicle movements would have been reported by their tachographs.   So we quickly planned to route parkrunners' cars round the lorries, and such is the spirit of parkrun, that in no time at all two volunteers had appeared to help direct the cars - many thanks to you both.

After that it was all very normal - the sun soon came out (which remarkably does seem almost normal at the moment), parkrunners started to gather, there was the first timer briefing and then we were down to the start where we were pleased to welcome nine doing their very first parkrun,  as well as visitors from Swindon, Chippenham, Andover, Bradford on Avon, Southampton and Felixstowe.  And then we were off, a slightly smaller field than in recent weeks - perhaps for a variety of reasons - but what matters is that 120 parkrunners and 22 volunteers enjoyed being part of this morning's event, whether running, jogging or walking, or giving encouragement as marshals, or doing other roles at the finish.

Congratulations to the 24 of you who achieved PBs today, and to Holly Rush of Avon Valley Runners who set a new female course record of 19:45, just over a minute faster than the previous record.

We'll be back next week and will look forward to seeing you then.

A scene from our anti-clockwise event on 4th May; we are planning more
of these in the summer. 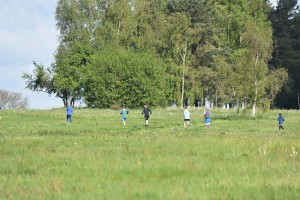