After months of planning, our inaugural event was finally here.

Mohammed Ahmed had the honour of delivering our very first Run Director's briefing (technically this was his second RD stint after last weeks test event - more on that later). 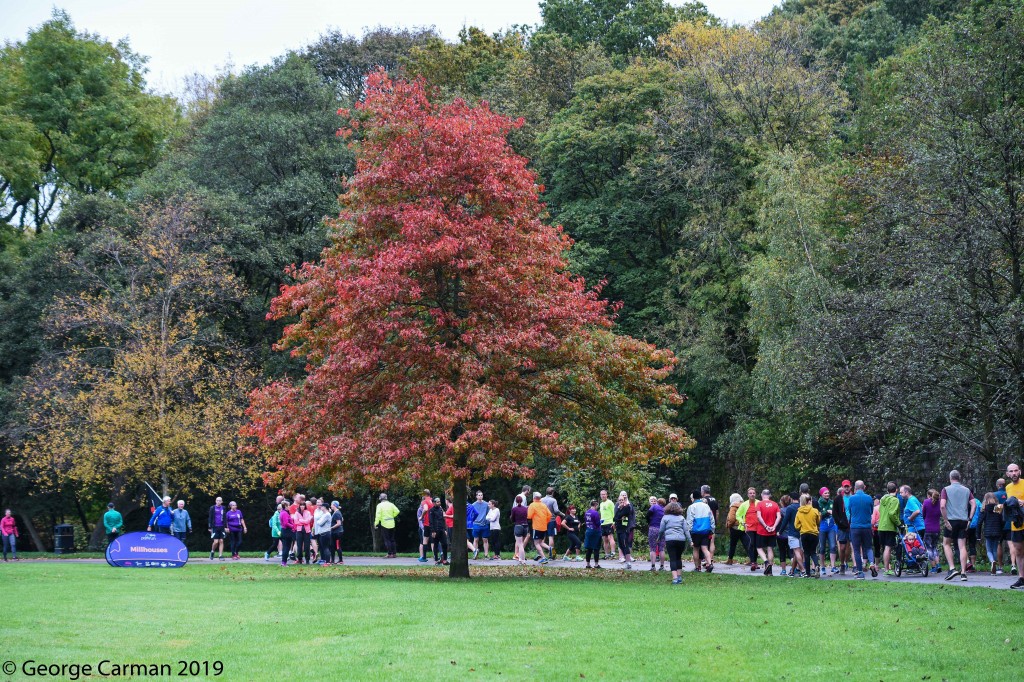 But before that, there were a few things to cover: I thanked everyone who had helped deliver this parkrun and for all their hard work behind the scenes.

I made a mental note of not mentioning any specific names for a couple of reasons - I was bound to forget someone (which would have been a lot worse!) and I don't think anyone wanted a Gwyneth Paltrow style Oscars speech where we could just be here all day thanking individuals, because there were so many!

But, this is the run report, and I feel the following all deserve a special thanks for their help and support over the last few months:

The whole process of setting up was made a lot easier thanks to these and others who helped along the way. Of course, we can't forget our parkrun Ambassador Karen Weir, who has been with us every step of the way with all the useful insight and pointers.

But the most amazing thing was we never had to put a call out asking for anyone to come forward - people were more than willing to offer their help! This not just embodies what parkrun is all about, but also says a lot about how helpful and forthcoming the people of this fine city are in general, so thanks again everyone! 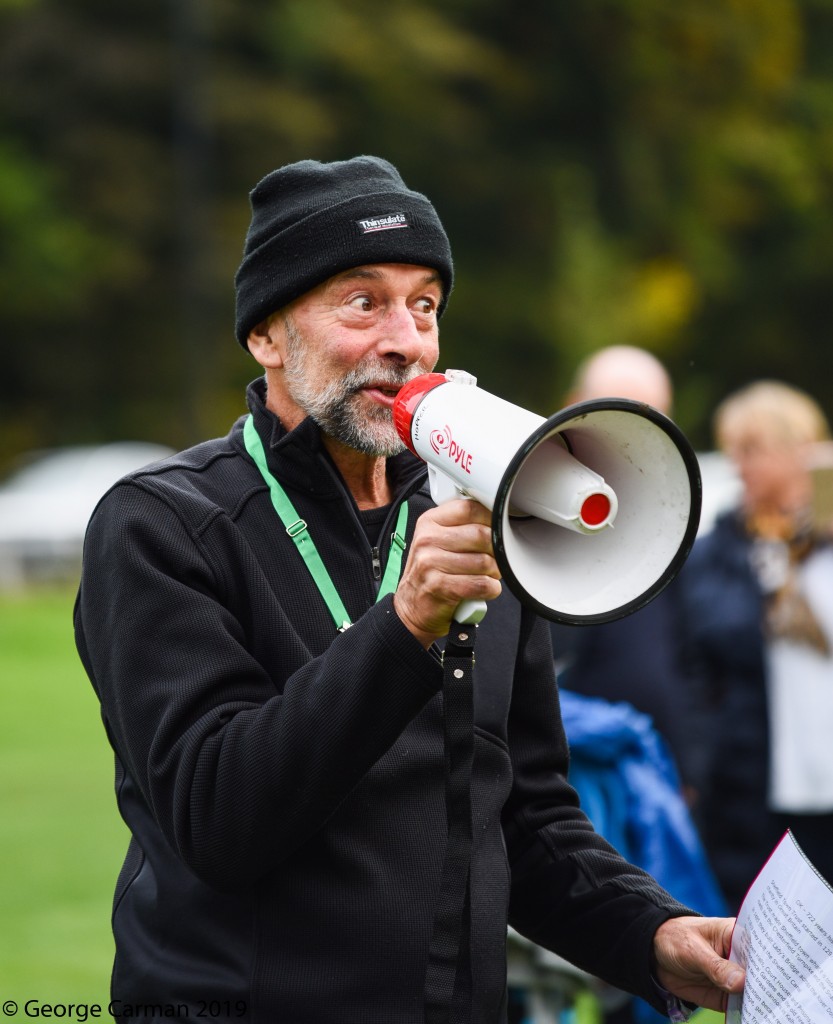 Before we could get to the RD briefing, there were a few other formalities. Jim Fulton from the Sheffield Town Trust said a few words about how they (along with the Steel City Striders) have helped Millhouses parkrun to get up and running, and how they continue to fund other good causes locally. 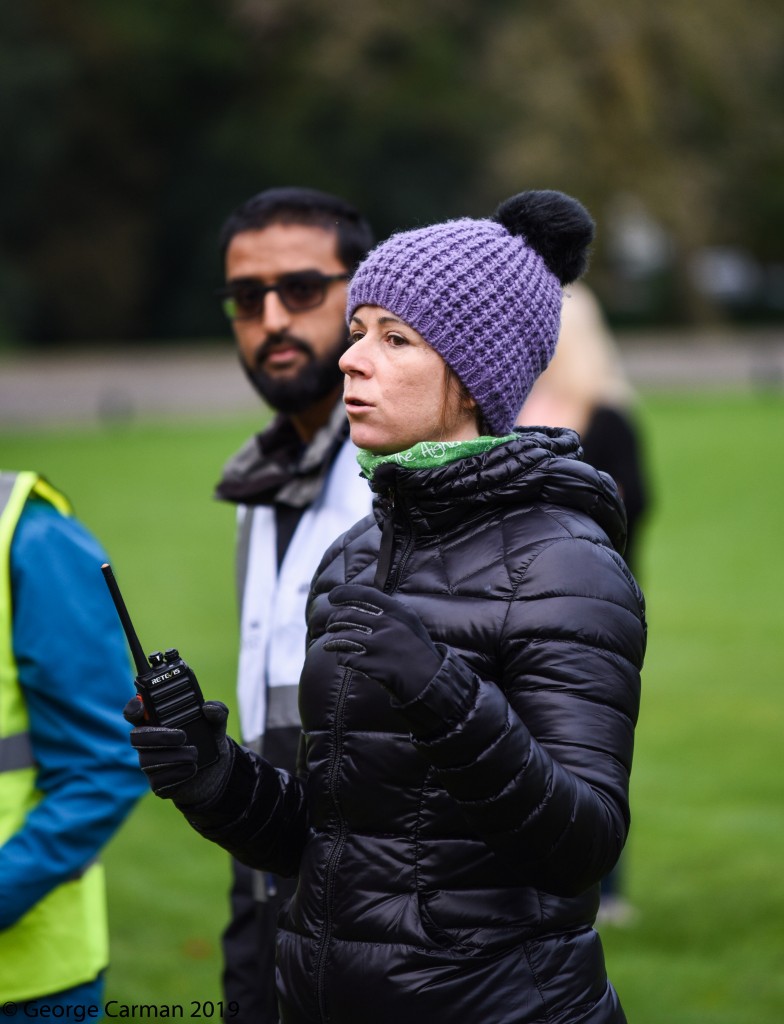 Then it was over to local parkrun Ambassador Karen Weir, who made a specific point of staying on the paths at all times and to keep off the grass, especially in the ornamental sections, and for everyone to be on their best behaviour (well, all parkrunners are nice and well behaved aren't they?

) as a lot  of work has gone on behind the scenes to bring parkrun to Millhouses. 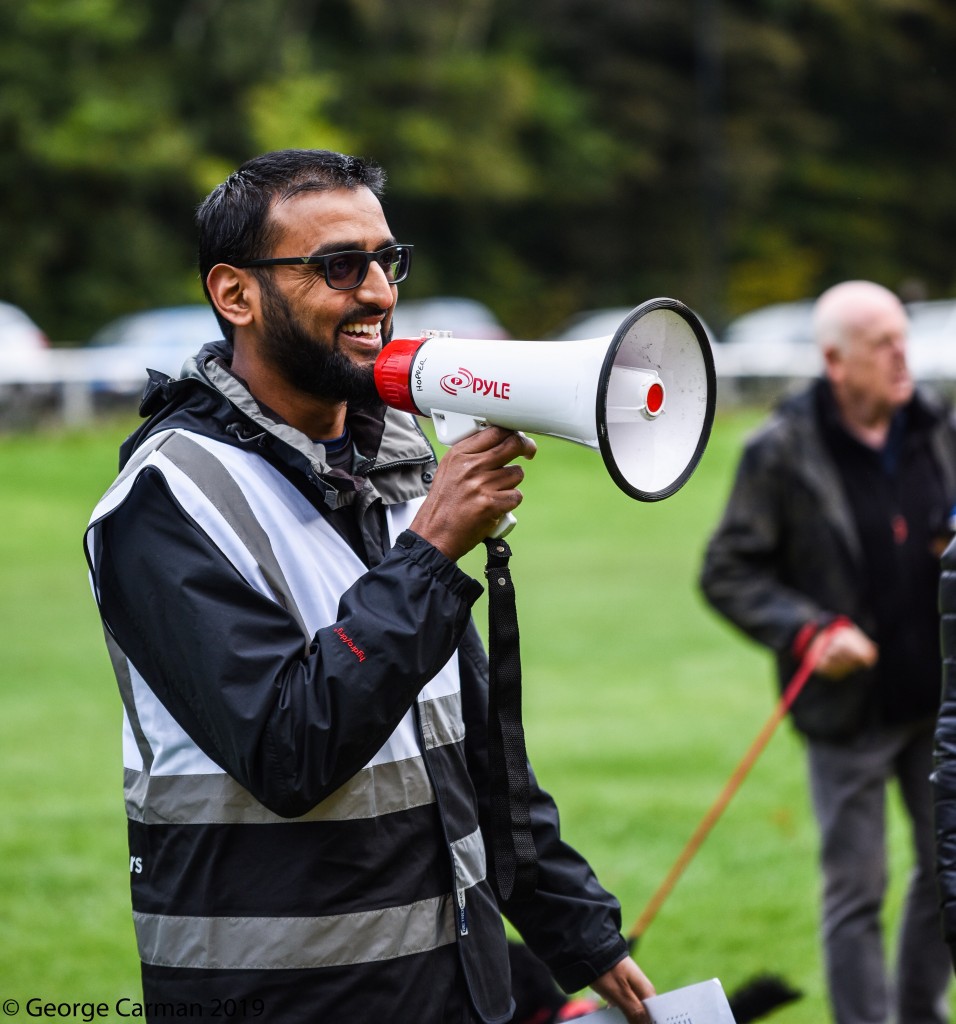 Finally, it was over to today's RD Mo who covered all the parkrun code, but more specifically to Millhouses - we are a no dogs parkrun! We realise this will not please everyone, but there are a number of very narrow paths and bridges where it would pose too much of a health and safety risk to other parkrunners and park users.

But the biggest cheers were reserved for today's volunteers, and when he asked who here is doing their first parkrun at Millhouses? This got a huge round of applause from everyone.

We had a massive amount of 36 volunteers today, so a big thanks to everyone in hi-viz: 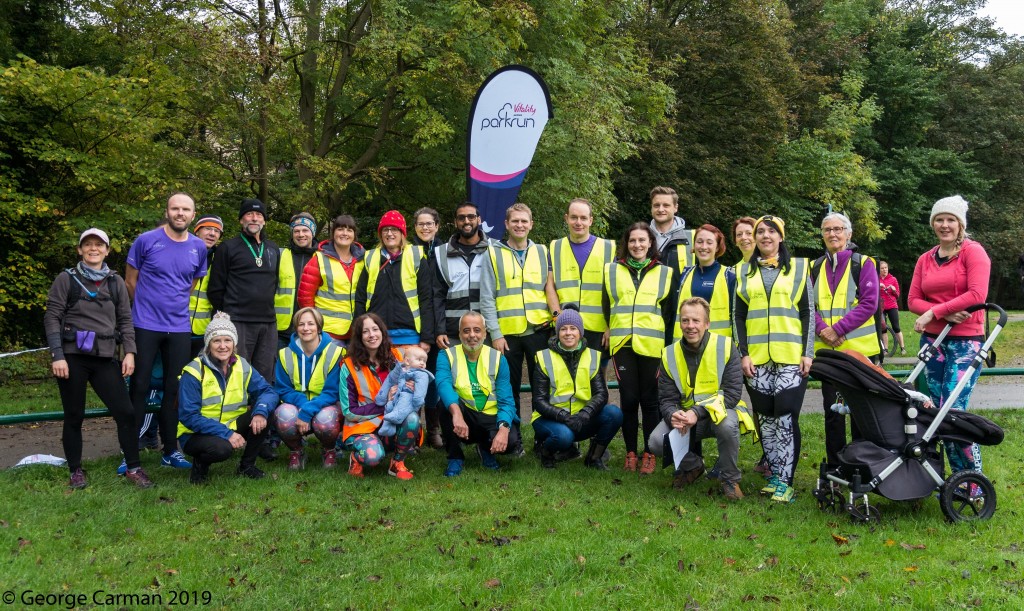 We always need volunteers in future weeks, so If you fancy helping out please send us an email at millhouses@parkrun.com and we will add you to the roster. No task is too big or complicated and full training will be given.

I mentioned earlier that this was technically not Mo's first RD stint here at Millhouses despite it being our first event. This was because we had our test event last week on 12th October, where a total of 69 ran, jogged, or walked the course. A test event is much like a real event, where everyone gets their barcode scanned along with their finish token but the big difference is that no one gets an official time or a run credit, and likewise the volunteers do not get an official volunteer credit either. The whole purpose of a test event is for the core team to get valuable practice in running the event before the big day of the first event.

The eagle-eyed amongst you may have spotted some parkrun royalty in the crowd today. Karen is not only our local parkrun Ambassador, but she is also one of the original 'Bushy 13' who ran the very first Bushy parkrun on 2nd October 2004 (back when it was was known as the Bushy Park Time Trial). Here she is with another original Bushy 13 club member John Kipps, who took part in the run today. As the name implies, 13 people ran the Bushy Time Trial that day, and they can be identified by their special 'gold barcodes'. We were honoured to have not just one, but two in the park today! I wonder if they had any idea what sort of (friendly) monster parkrun would turn out to be 15 years later! 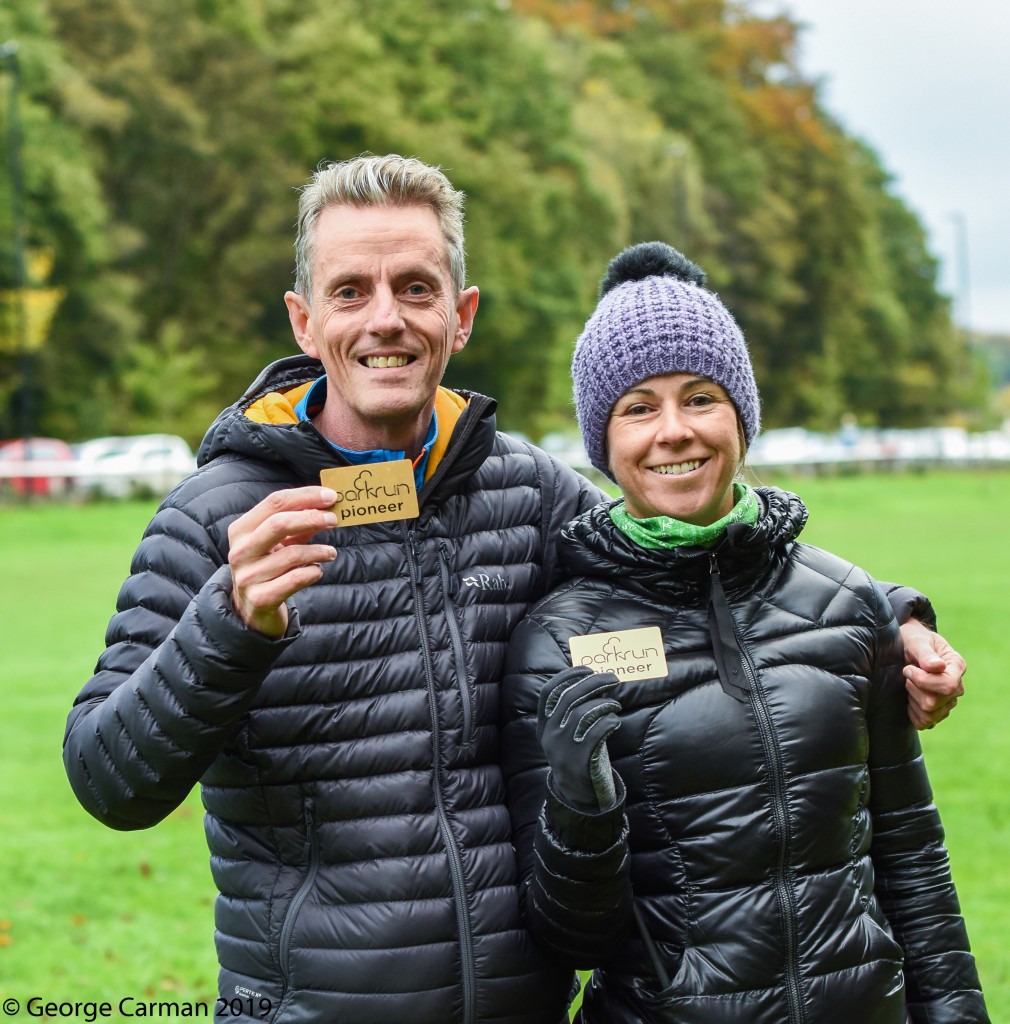 So, on to the actual event ... wow what a turnout! 500+ ran, jogged, or walked the course in what was a course PB for everyone! Here in Sheffield, we are blessed to have a total of six parkruns, and it was great to see so see so many smiling faces who turned up this lovely autumn morning. So many happy people in one place, and a special warm welcome to the 53 of you who did your very first parkrun today at Millhouses. We hope you enjoyed the camaraderie and how parkrun brings people together, and will be back again next week!

We are spoilt for choice here at Millhouses when it comes to post-parkrun beverages. The park cafe is offering special deals to parkrunners if you buy takeaway food or drinks on the go at the cafe hut and gazebo situated just outside the main cafe. The Waggon and Horses pub is also offering discounts on breakfast to parkrunners.

A date for your diary: we are cancelled on 2nd November due to another event in the park.

Finally, thanks to George Carman for these photos.

Happy parkrunning and see you next parkrun day, 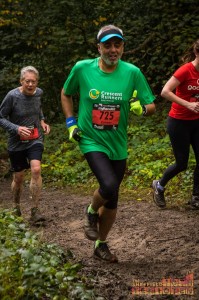