We have taken the decision to cancel today's event. Our Run Director has been around some of the course and unfortunately made the decision to cancel today’s parkrun. Safety comes first and it’s so windy on the course I feel it wouldn’t be safe for the volunteer team to set up, and the amount of trees we have around the course are cause for concern for our runners. So, a full refund for everyone and a free parkrun next week!

Thank you for understanding

As we look forward to a new year and decade, we thought we would have a look back at our 2019 at Montrose parkrun.... 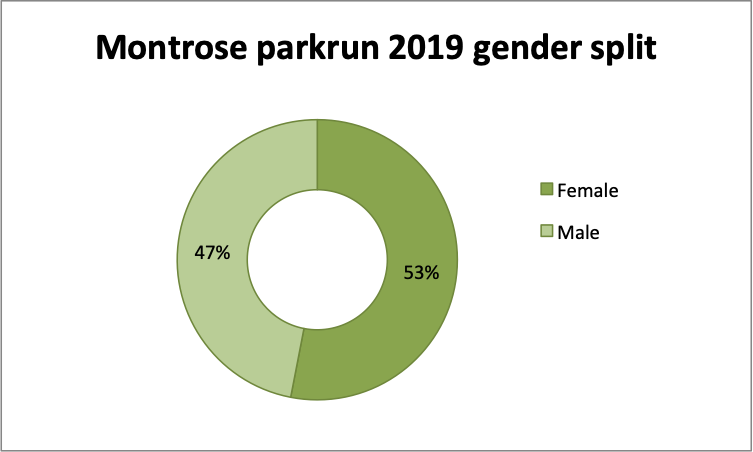 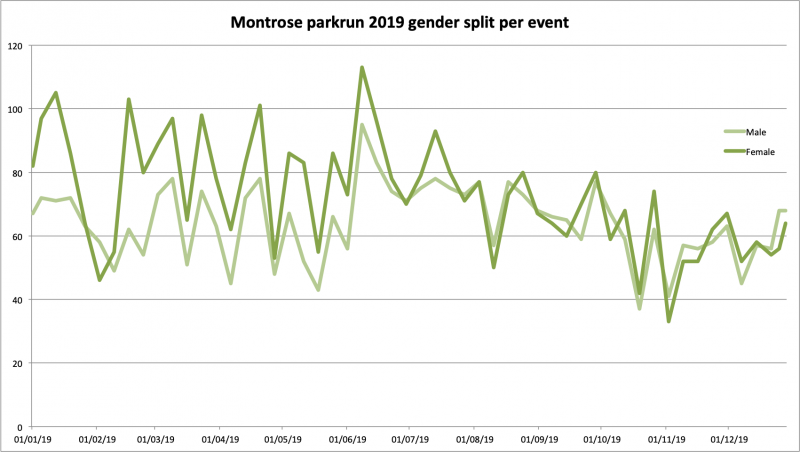 We held a full house of 54 parkruns in 2019 – all 52 Saturdays plus extra events on New Year’s Day and Christmas Day. We are delighted to be able to say that not one event had to be cancelled in 2019.

Lesley Strachan and Andy Scott share the attendance top spot, each having attended 51 Montrose parkruns each. Tina Humphries joined us for 48 and Ian Paterson came to 46. 792 people attended 1 parkrun at Montrose in 2019, 412 came to 2 and 360 did 3.

The largest attendance was at our 100th event on the 8th of June when 219 people ran, jogged or walked the course, which is still the all-time record at Montrose. The lowest attendance was 77 on a cold, wet morning on the 2nd of November. The average attendance in 2019 was 143.

972 people ran, jogged or walked their first Montrose parkrun in 2019.

1500 Personal Best times were recorded at Montrose parkrun in 2019. 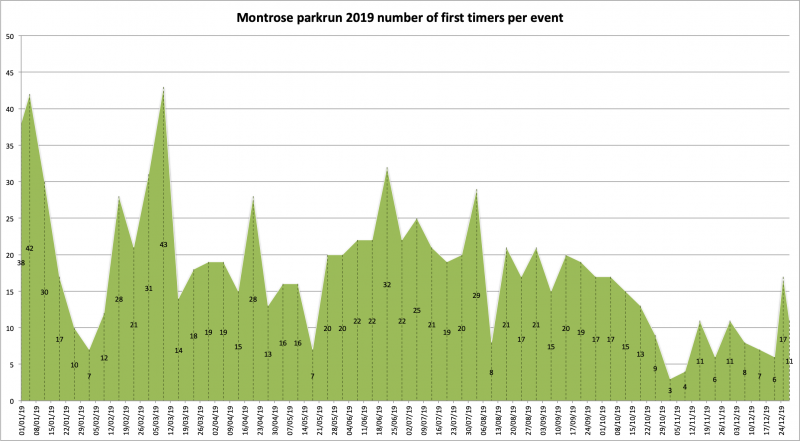 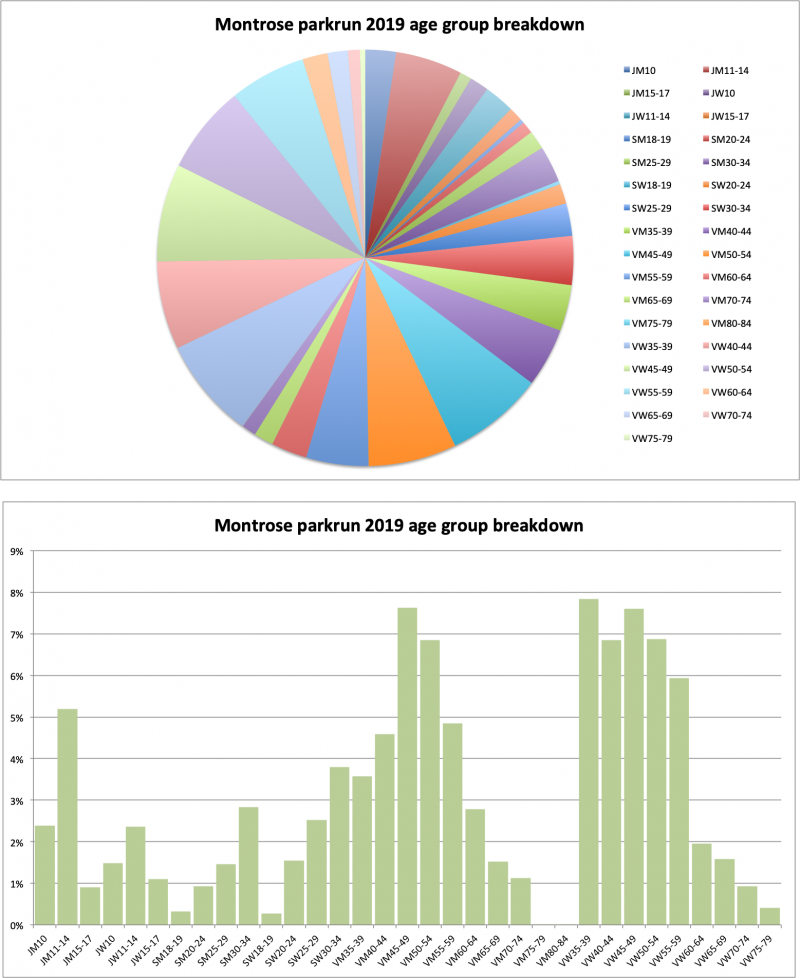 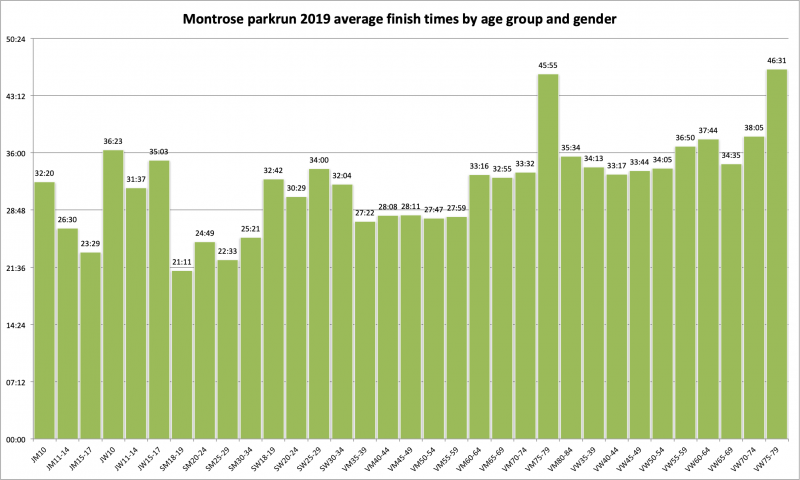 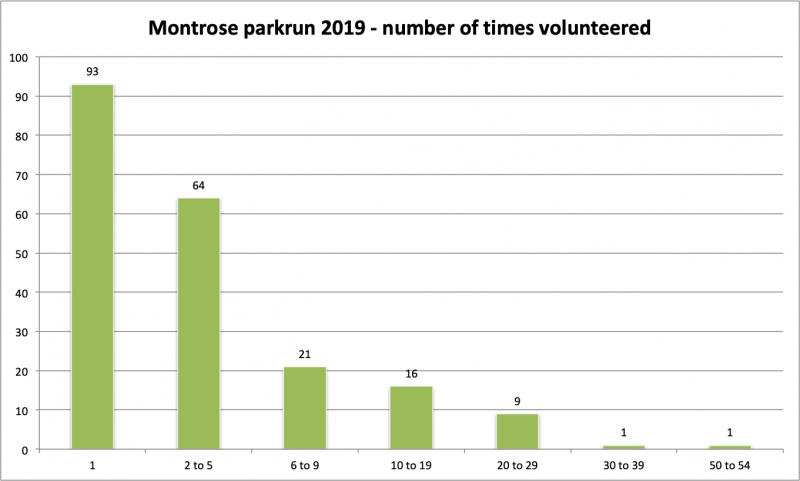 The first Saturday parkrun of 2020 was our annual Bring a Buddy week where we encourage you to bring along a friend that either hasn't been to parkrun or hasn't been for a while. January usually sees an increase in parkrun sign ups and attendances, in fact the parkrun wiki tells us that 41 people signed up choosing Montrose as their home run in the past week. On the 5th January 2019 we broke our attendance record that had been set on our very first parkrun at Montrose, the following week we broke it again! and throughout  2019 we have seen an average of approx 121 only dipping under 100 just 3 times over the year, which is just fantastic.

Once we set you off round the course at 9.30 the volunteers regularly have a game of parkrun "bingo" where we all try to estimate how many runners will have that week.  The guesses this week ranged from 147 up to what everyone thought was a rather optimistic 189 from myself the Run Director, but oh how wrong we all were and a massive 217 ran, jogged or walked our course, just 2 short of our current record (Maybe we will break it this coming Saturday)

There were 35 first timers and 17 of those, ran walked or jogged for the very first time. 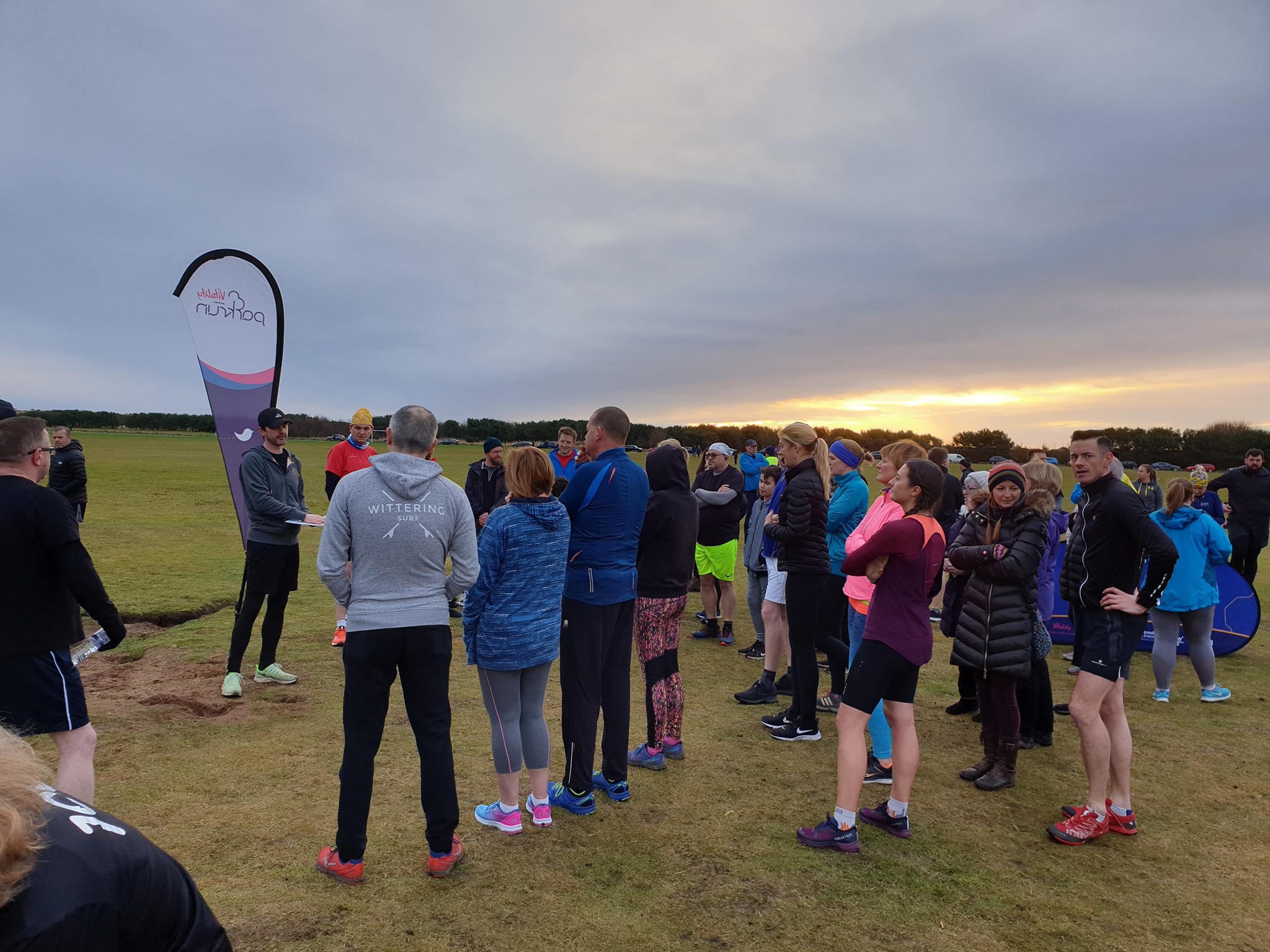 One of the great things about parkrun it that it is for everyone and it was fantastic to see so many families participating together, Children can sign up for a barcode from the age of 4, but all under 11's must stay in arms reach of a responsible adult at all times and also have to participate on foot, it is a long way for some of the younger ones though and there is Junior parkrun for ages 4-14, it is 2K instead of the normal 5K.  Our nearest ones are Duthie Juniors in Aberdeen and Strathmartine Juniors in Dundee.  Junior parkrun happens on a Sunday and you can find out more information on the parkrun website 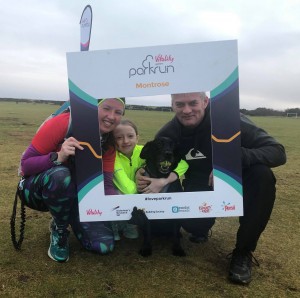 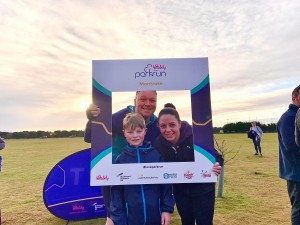 We had 4 milestines achieved this week, with Tina Humphries, Zoe Smart and John Cargill all running their 50th parkrun, and Brian Manzi who volunteered for the 25th time, I'm sure we will see them all sporting their new T-shirts soon.

We didn't go to the cafe to do this results this week as it was our annual parkrun social in the afternoon. We headed off to Sharkys for a bite to eat and a chance to catch up after the busy festive period. A couple of you joined for a while us which was nice to see.  Our "lunch" lasted a little longer for some, but that's where I'll leave it as what happens at the parkrun social, stay's at the parkrun social! 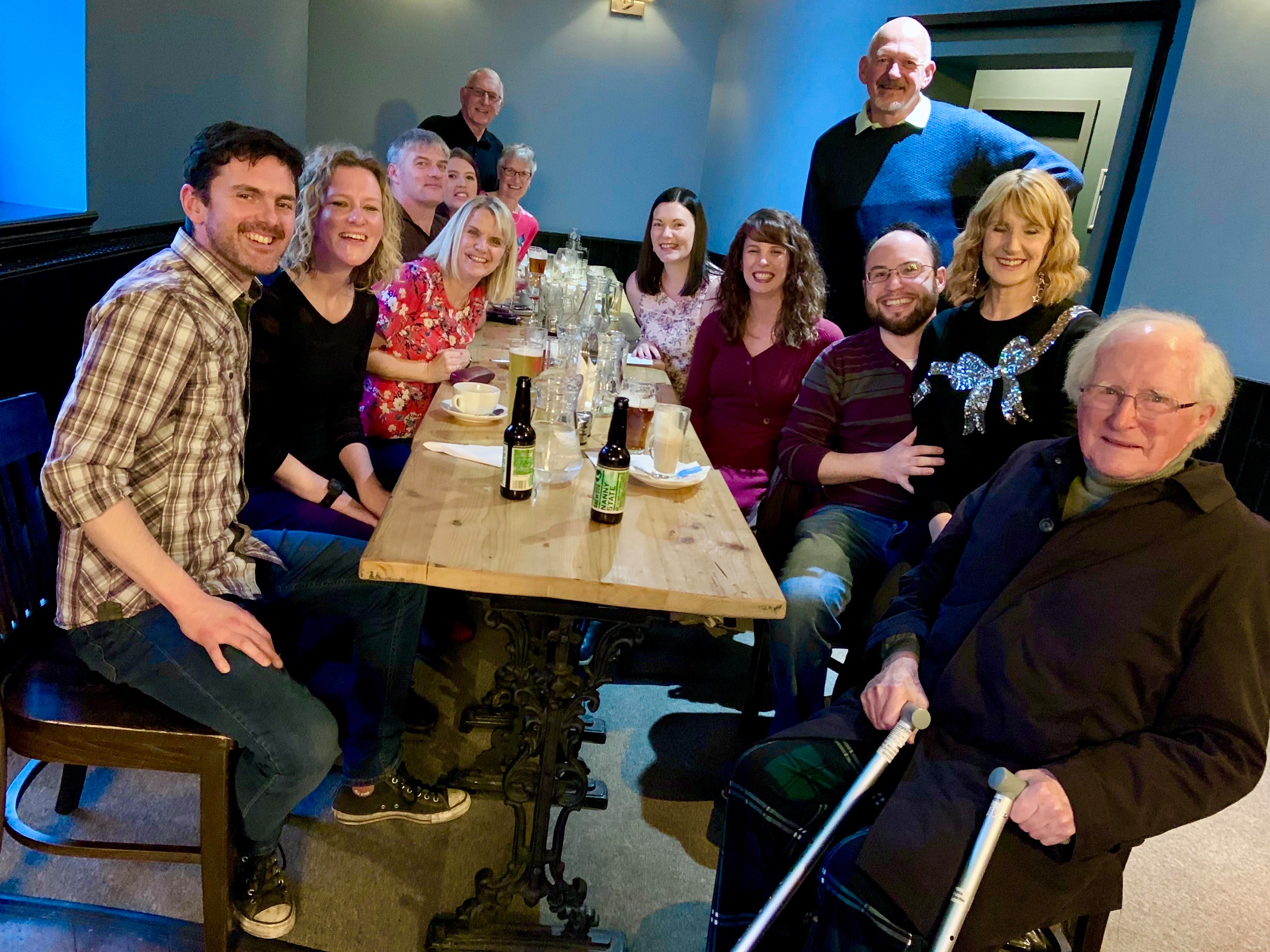 Our first parkrun of the decade started under ideal running conditions- cool, light and dry- although the famous Broomie wind made an appearance later on in the run.

131 people walked, ran or jogged the 5k of whom only five are listed as ‘unknown’. That means a healthy 96% of you remembered to bring your printed barcode: a good start to the year!

We all like to celebrate PBs and milestones but most of us agree that the hardest parkrun achievement is getting up and out to do your very first one - especially on New Years’ Day with an earlier start time. Of the 27 first timers to Montrose today, no fewer than ten were doing their first parkrun anywhere, ever. Congratulations and welcome to parkrun Kyle GOUCK, Alex BROCKMAN, Bruce MAIR, Jamie TONKS, Sam MCLEAN, Katie DEVANI, Sarah NIBLOCK, Morag HARVEY, Peter HUMPHRIES and Gail MURRAY.

For the most part the regular speed merchants seemed to be taking it a little more gently today. Maybe they were conserving energy for the double at Stonehaven - what other reason could there be, at 9 a.m. on New Year’s Day? Nevertheless nine park runners achieved PBs. parkrun PBs are course specific so can only be attained if you’ve recorded a time here before (and remember your barcode).

This writer was timekeeping today - which I find to be an enjoyable role, not too demanding but giving a real insight into how parkrun works and how diverse a group parkrunners are. Today it suited me very well, as I was heading straight off on holiday afterwards and didn’t want to be ‘parkrun fresh’ on the plane. However it’s good to remember that the majority of volunteers are people who would maybe rather be walking, jogging or running, but every once in a while give up their own parkrun to make sure everyone else gets to enjoy theirs. If you’re a regular at Montrose and enjoy having our free, weekly, timed 5k on your doorstep, please consider whether you could volunteer occasionally to keep it going. Thanks especially to our New Year’s Day volunteers: Adrian PATTERSON, Alison YOUNG, Arthur GRANT, Ashlea MACDONALD, Avila MURRAY, Barry SMITH, Chris MAHER, Denis RICE, Jamie KINGHORN, Mike CORDINER, Pam RICHARDSON, Samantha REDPATH, Valerie THOMSON, Wanda ARTHUR and Wendy ARTHUR.

Just two sleeps now to the next Montrose parkrun, back at the regular time of 9.30 a.m. every Saturday. 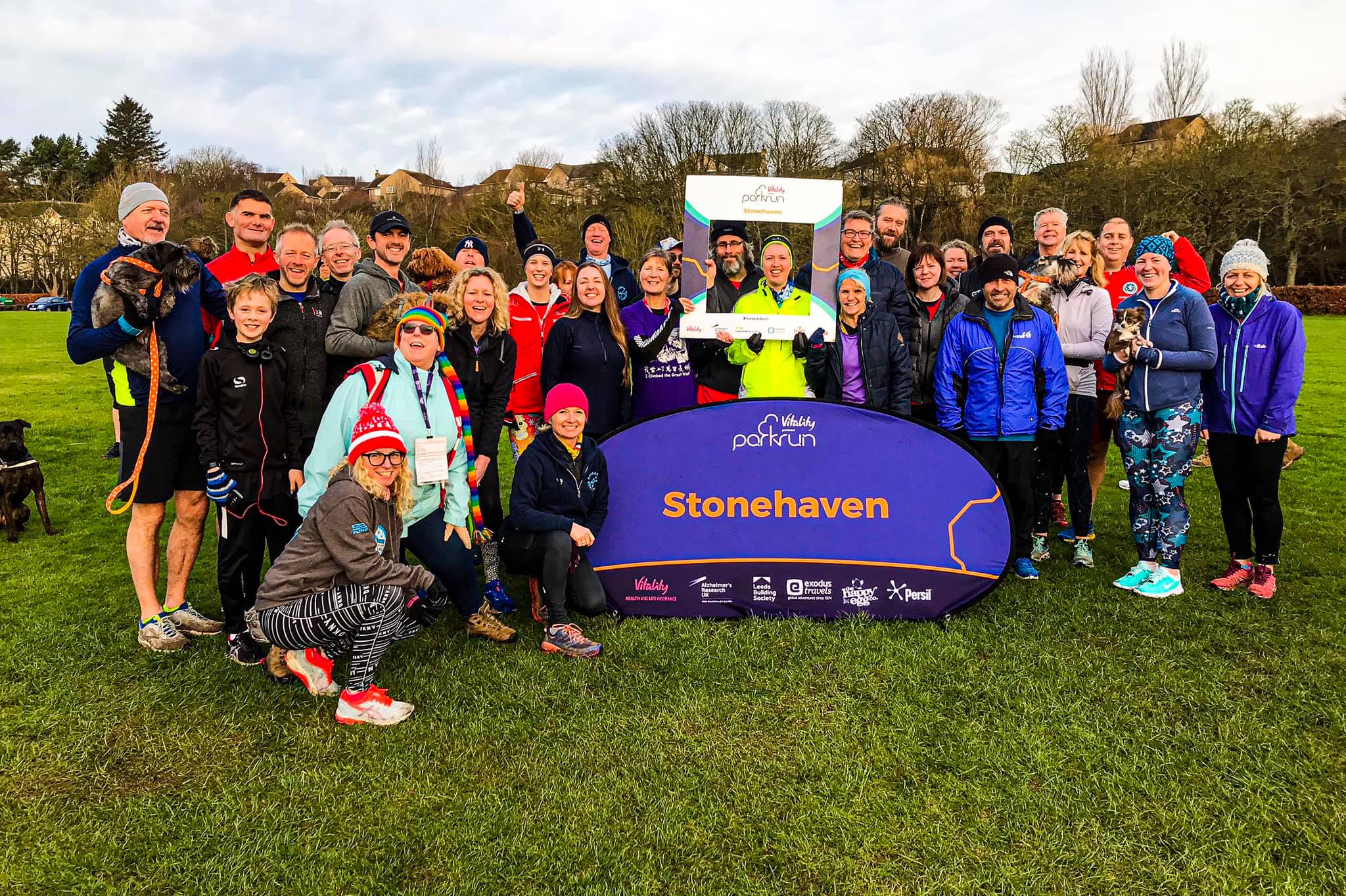 With an Etonian Prime Minister spouting classical languages, I can show off too. NONNE: that word begins a Latin question expecting the answer, "Yes". In Montrose parkrun circles, if two Directors invite you to write a joint report on park runs 129 and 130, the request (demand) begins with NONNE. Nothing less than "Yes" is expected.

Arriving on Saturday for parkrun 130, I saw two sad strands of wistful tinsel, discarded on the Broomfield grass. What a contrast, I thought, with the decorations and dazzling turnout by the Christmas Day participants only three days before. The inspiration and fun of the costumes were outstanding. Bt Saturday. in my late mum's down-to-earth phrase, it was "back to normal". 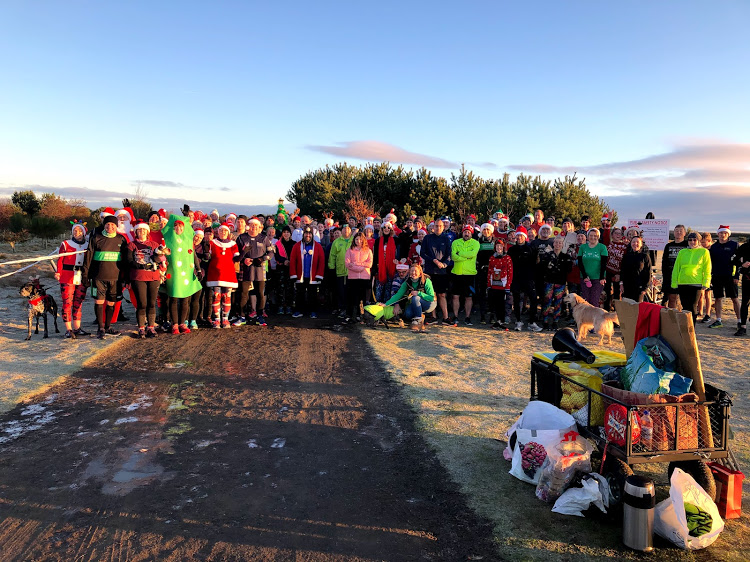 Except that at Montrose parkrun, there's no such thing as boring normal.

Lets's start with the statistics, with Christmas Day first in each case. Participants: 132 and 139. First timers: 17 and 11. Personal Bests: 6 and 8. On Christmas Day we had visitors from Australia, Stirling, Derbyshire, Orkney and (even) Brechin. Saturday welcomed tourists from Didcot, Newcastle, Edinburgh,Elgin,Norway and Sweden. Actually, the welcome-back "swede" was our own Pauline Belford, home for the festive break, having moved recently to live in Sweden (where, she says, local run is smaller).
On Christmas Day, Kirsty Merchant, from Glasgow, chose Montrose for her 50th run. Moira Raffan achieved her 50th on Saturday. Congratulations to both! 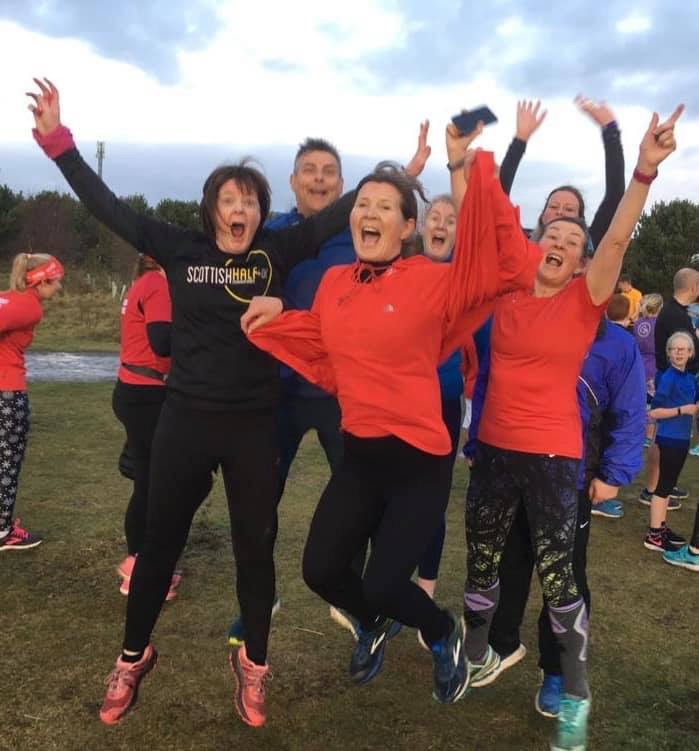 And, Saturday was David May's, birthday, wearing his 50th vest- gained in Edinburgh- for the first time in Montrose. Under intrusive cross-examination, David conceded that he has done more years than runs.

A delightful feature of Christmas Day was the participation of, probably, the highest ever number of dogs. There happened to be a veterinary Surgeon in the volunteer team. Happily, no canine emergency required her professional services to distract her from her time-keeping duties.

Weather on both days was benign, with two different, but still beautiful, big skies. Seasonal ice on the concrete perimeter track may have reduced the PB total on Christmas Day. On Saturday the generous provision of pacers could well have lifted more participants to their PBs.

In scarcely 48 hours, we'll be up bright and early to greet the two thousand and twenties with our 9am New Year's Day run. Just think: by then, our dictatorial, demanding Directors and their put-upon, cowed volunteers will have facilitated four Montrose park runs in 12 days. That's surely a sort of PB?