A big thank you to everyone who came along to run, jog, walk and volunteer at our first Moors Valley parkrun in 18 months this morning! It was so good to see you all back again.

We're very sorry however that there was an incident involving a hornet nest near the course today, leading to a number of our runners, and one of our volunteers, being stung. We wish anyone affected a full and speedy recovery. If you've not done so already, please let us know if you were affected by emailing us at moorsvalley@parkrun.com

The Moors Valley rangers have closed that area of the park and are working to resolve the issue. We've also reported the incident to parkrun HQ.

As a precautionary measure, we'll be running our B course next weekend, which will avoid the area completely. We'll return to our A course when we're confident that the hornets are no longer there.

We'd also like to extend our thanks to Moors Valley Country Park and Forest for welcoming us back again and for putting up some lovely signs for us on our return! Hope you see you all again. 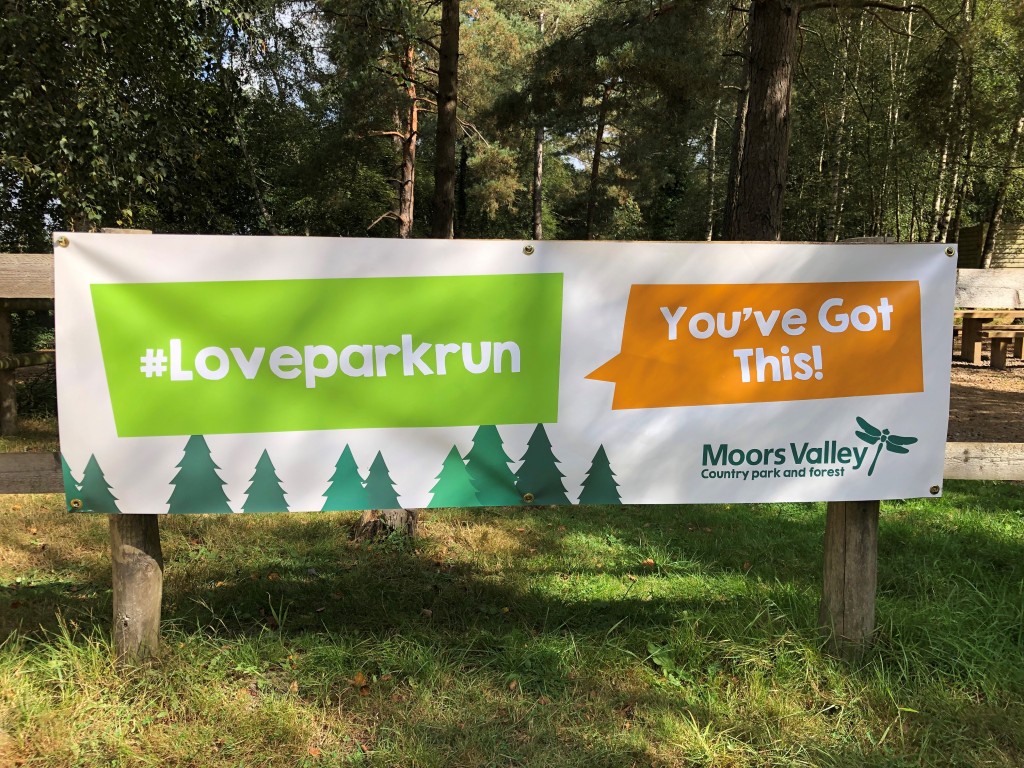 Tweet
Please take a moment to familiarise yourself with the parkrun COVID-19 codes before you join us for tomorrow's first parkrun back at Moors Valley.

Please walk, cycle or car share if possible. If you arrive by car, please allow extra time to access the park and to find a parking space. You may be directed to an overflow car park either by Moors Valley Country Park and Forest rangers or parkrun marshals - please follow their directions.

Make sure you are in good time for the Run Director's Brief and don't forget there is a First Timers' Briefing if you are new to our event.

Finally, don't forget your barcode, keep safe and we are so looking forward to seeing you all again!! 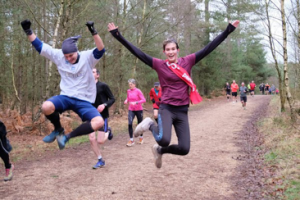 We’re pleased to announce that Moors Valley parkrun will be restarting on Saturday 11 September.

This is really exciting but is very much dependent on us having enough volunteers on the day – in order for us to go ahead, we’re going to need even more high-vis heroes than ever before! Please check out our volunteer roster to see what roles are available during our first few weeks back.

You’ll be given our full support whether you’ve volunteered before or not, and many of the roles you’ll be able to do before or after the event, meaning you can volunteer and still take part in the parkrun itself.

Please let us know if you can get involved by emailing your parkrun barcode number, along with the role and date(s) you’d like to do to moorsvalley@parkrun.com

As with almost all of the 1,863 parkruns around the world, it has taken a lot of work to get to a position where we can start up again, and we’re grateful to the team at Moors Valley Country Park and Forest for maintaining an open dialogue over the course of the past 17 months. We’ll continue to work together and will keep a close eye on any changes to government guidance and restrictions that could impact our restart date.
And one final point to mention – to help avoid the car park filling up upon our return, please car share, walk or cycle to Moors Valley if at all possible.

We really appreciate your patience as we await our return and look forward to welcoming you back to Moors Valley parkrun next month. 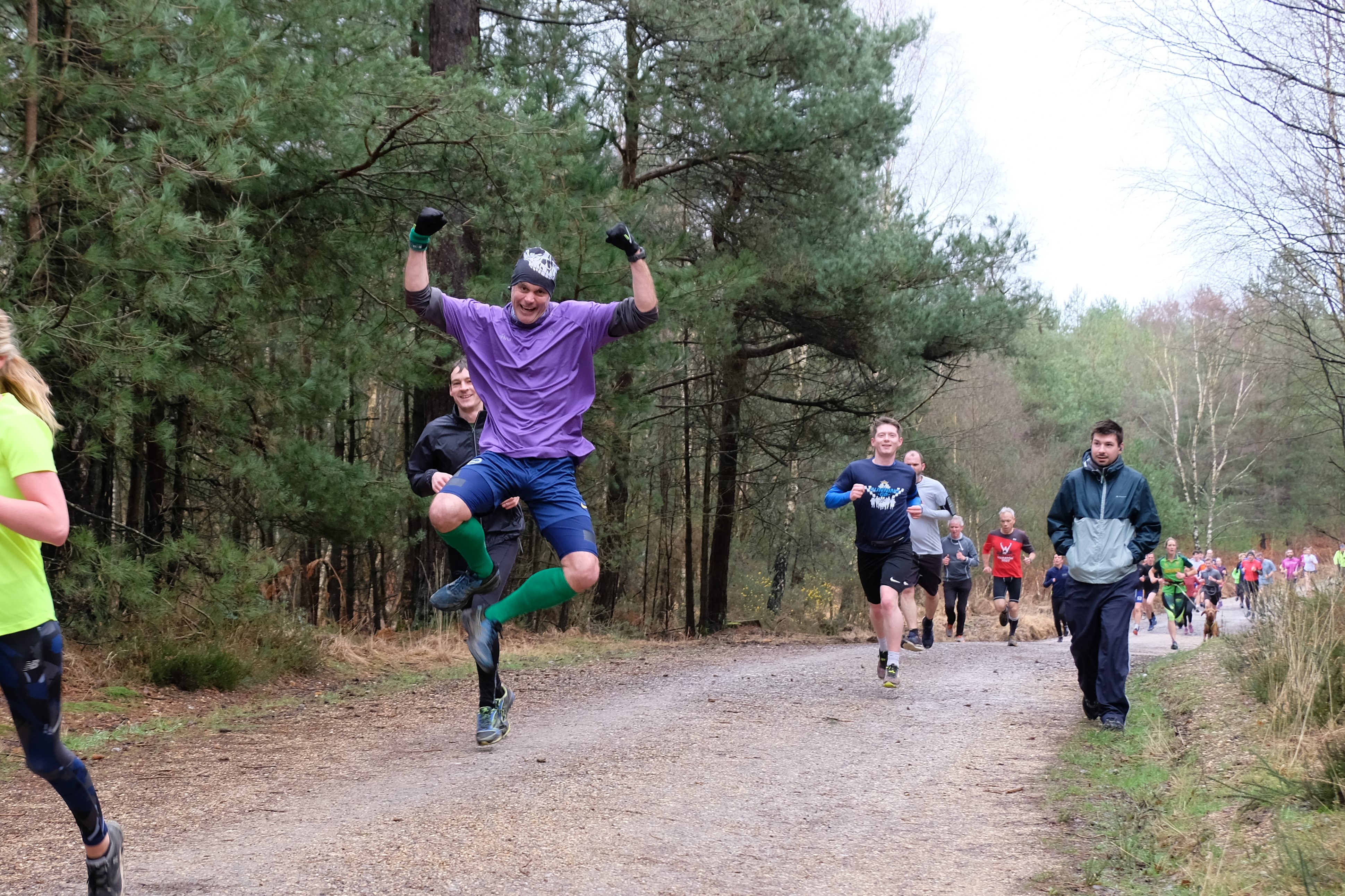 Shortly after 7am, Mr T and I set off from Bognor Regis to meet friends for a bit of  touristing at Moors Valley. The weather was fine and roads were good despite the 50 mph zones. Car parking was easy and straightforward, parkrun was easy to find near the totem pole to the right of the café and toilets. Photographer Neil Jones took a group photo of us tourists and went on to take photos of the briefing and parkrun. Moors Valley was the first parkrun where we have seen a completely full volunteer roster, run report writer was the last slot to be taken, so here we are! It's my first attempt but gaining me a new badge, along with my alphabet M, for my running challenges. Unfortunately I missed getting a finishing time for my stopwatch bingo but with only nine times to go there's always next time! 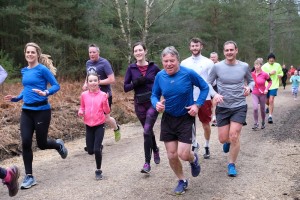 We attended the first timers briefing which was clear and concise, followed by the main briefing given by run director Heidi SNOOK with a microphone. Having found the Facebook page we knew in advance that Moors Valley were celebrating International Women's Day by encouraging runners to wear purple. I wore purple leggings courtesy of Matalan, my 25 volunteer t-shirt and purple duck socks! Five ladies lined up to give a few words of support to the female runners amongst us. There were also a number of significant milestones today, three birthdays, a 50th parkrun, a 100th parkrun and two 250th parkruns, sashes were given out to be worn in honor. 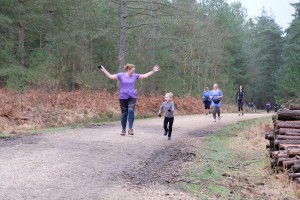 Moors Valley is one lap of a stony track through the Forrest. It has a golf course beside the route, an out and back section followed by a stretch beside the lake and train track. I was surprised to come across a fellow Bognor parkrunner Karen Vilday in the first 100 meters, who had run from Furzehill and then back! The course finishes near the children's play areas and a short walk from the café and toilets. Mr T and friend Martin ran whilst friend Jackie and I walked. All Marshals along the way were lovely and friendly, marshal number five efficiently called for help on her radio for a fellow runner who had taken a stumble, the vehicle arrived quickly and help was given. Particular mention has to be given to the female Marshals on the second bridge for their cheering, we felt that they should have had parkrun pompoms! 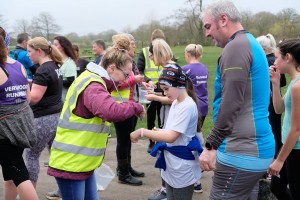 Everyone in the finishing funnel was pleasant as were the staff in the café. Many thanks to all the volunteers, including tailwalkers Mandy HARDIE and Sally WESTBROOK. We all had coffee afterwards, I had a sausage sandwich, Mr T had a bacon sandwich, and Martin and Jackie shared a chocolate cake! Yum!

And onto the results, which were emailed just as we changed and drove out of the car park onto lunch with family in Bournemouth! There were 588 runners in total,112 PBs, 70 first timers, and 37 unknown runners. Of those, 140 runners belonged to running clubs. Well done to Nick JAY, first male with a PB of 18:12. The course record holder remains with George KING with a time of 15:28.

Before I go, and as a treat for reading to the end, did you know that if you put #IWD into Strava your route turns purple! 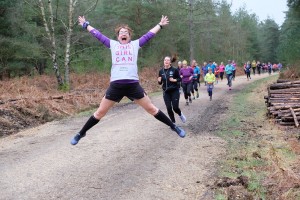 Today I was in two minds over which run I was going to do but in the end the winner as Moors Valley for my gentle warm up for my later run at Avon Tyrrell for Hope Rising. You don’t have to miss a run and you also get to have the eggplant running top as well.

I noticed that they were missing a run reporter so I rocked up to the volunteer’s area and offered my services as this role was vacant this morning. I have been here twice before and enjoyed it on both occasions.

Today as I was ambling around before the start I was deciding whether I needed my waterproof jacket (waste of time) or how far back I would be as I had every intention of taking it easy.

For a change I started at the very back and took it very leisurely. It was a little different than the last time as I seemed to like the idea of being tripped up by various bits of stick or even just twigs. Early on one runner with a buggy had to do a little running repair, imagine having the carry that for over 2.5 KM’s?

Around the 2 KM point I was greeted with a hardy hello from a runner that was surprised by my response and also had a chat for a little while before they disappeared as my gentle meander was just too slow for them. I hope they had a good run at Wokingham on Sunday as a pacer.

For the most part it was easy going and I was passing more people that I envisaged that I would, yes I was slow for me but I just can’t go slow enough even though I was 6 minutes slower than last time at Moors Valley!

On the dog leg point I ran with a lady with a chocolate lab for a bit and we discussed to pros & cons of running with a dog. I leave my dogs at home as one would either bite other runners or put me on for a personal best or a heartattack, another is a little too old and would also spend the entire run marking his territory & then my spaniel would stop when hearing footsteps from behind.

On the last part I had a little laugh with a young lady that just blew past me just can’t believe that she left me so far behind just going by the lake. All in all it was a gentle warm up for later on what turned out to be a far better day than was expected. I even found 70p towards my parking fee on returning to my car.