As part of our efforts to encourage more women and girls to participate, we are planning a female-centered parkrun celebration on Saturday March 7, 2020, the day before International Women's Day.

The colour chosen all over the world to celebrate this day is PURPLE, so it would be very nice for participants to wear something purple. But above all to try to bring as many friends and acquaintances as possible on the Saturday morning.

Let's try to fill the park with women! We're counting on you

There will be a Myrtle parkrun on Christmas Day at 9:00am - everyone welcome!

Myrtle parkrun is cancelled on Saturday 20 July due to Bingley Show taking place in the park.

You're welcome to go to one of the nearby parkruns instead, or if you're feeling more adventurous try this: 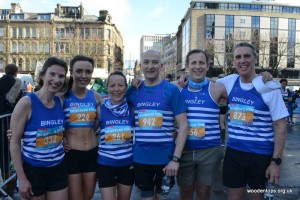 Tomorrow sees the second Myrtle parkrun take-over. This week it's Bingley Harriers and it promises to be a belter.

Bring some change for the raffle and refreshments.

We look forward to seeing you there.

Steve mentioned this quote to me just after pointing out I’d been talking to RD Sam for 40 seconds after the ‘Go’ and we then had to run to catch the Tail Walker. I got a course PB though, surprisingly.

I do love to watch our more intentional parkrunners setting-off. Front runner Huseen USUIE looked intent on getting a PB – which he did, in a time of 17.41 assisted by Bingley Harrier coach John Smithhurst. parkrun RD Dave STEPHENSON, also a Harrier, performed his debut run with pizazz, sticking to club-mate Robbie WILLIAMS throughout the course just being pipped to the post in the final seconds. First finishing female was Grace DAWSON, also of Bingley Harriers.

Ilkley Harriers AC saw an impressive performance from Geoffrey HOWARD, who beat his own age-grade standing, recording 81.86% in a time of 23.09.

One thing that certainly went with a bang was the first ever Myrtle parkrun takeover – hosted by local running group TRAIL SNAILS. Trail Snails was started a year ago by Sam SWIFT and Dan Cherington and offers C25K (Couch to 5k) programmes and social runs. They now have over 300 runners and can often be seen running and volunteering at Myrtle parkrun, in their distinctive blue tops. At which other takeover would you see a unicorn and pacer called Dave – the unicorn was called Dave not the pacer – and masses and masses of cake.

For more information about the Trail Snails, see https://groups.runtogether.co.uk/TrailSnailsBingley

There were loads of positive comments, especially about the cake and fantastic marshals; like this one from uber-tourist Barry Shakleton:

‘We absolutely loved our visit. All First Timers except for me (green shirt) as I ran at Myrtle on New Years Day. We have more than 1,000 parkruns between us. The lady is Rosemary who is true parkrun royalty. She has run at more parkrun venues than any other woman on earth (about 300). Thanks for the great cake and all the marshalls. #lovemyrtle’.

I’m looking forward to our next takeover, which will be next week by the Bingley Harriers. I’m also going to pay more attention to the Starter, and set off on the ‘G’ of the ‘Go’, especially if there's cake.

This week 187 people ran, jogged and walked the course, of whom 40 were first timers and 66 recorded new Personal Bests. Representatives of 16 different clubs took part.

Today's full results and a complete event history can be found on the Myrtle parkrun Results Page.

Due to the danger of falling branches today's run is CANCELLED. Aplogies for the late notice.

Well, I was out on the course this week and can definitely confirm we have an interesting and challenging parkrun - and the BEST EVER marshals!. I really enjoyed the climb up from the bottom field and reaching the cenotaph to see the front runners charging back down the hill. Despite being at the back of the field (I was THAT one with the running buggy - I run with my daughter, Zara) it never felt like I was very far away from the hub of the parkrun buzz. And I LOST count of the number of 'well done', 'keep goings' and 'good works' I got as people lapped us - it was significantly more than at any other run I've done. I'm so excited to see how our little parkrun will grow over the coming year, as there is no doubt we've got great foundations; a fab course and an amazing core team. We always thought that the weeks leading up to Christmas in our first year would present the biggest challenge, in terms of recruiting volunteers and keeping a great atmosphere, but you guys - the runners and team - have absolutely smashed it. Looking forward to Christmas, NYD and seeing what's in store for Myrtle the Turtle in 2019.

This week 118 people ran, jogged and walked the course, of whom 40 were first timers and 22 recorded new Personal Bests. Representatives of 21 different clubs took part.

Tom Keighley of Chapel Allerton Runners was the first male home (for the second time) in a time of 18.43. Our first female was Holly Morris of Victoria Park Harriers in a time of 23.10

Out of the 40 first timers, 11 were completely new to parkrun with the fastest new-to-parkrun, Harry Wakefield, coming in at 20.20. Our fastest new female, Annabel Coates, finished in 26.11.

At the other end of the scale we had five '250' parkrunners, the first home being Andrew Byron of North Leeds Fell Runners (obviously used to the mud!)

Today's full results and a complete event history can be found on the Myrtle parkrun Results Page.

Many thanks to visiting parkrun tourist Scott Leach for the following run report!

On his 10th parkrun Matthew Warters was first to finish in 18.43, exactly 1 minute outside the course record to lodge his 5th first-finisher placing, having completed the same task at Skipton and Cliffe Castle parkruns previously.

First lady was Bingley local Nicola Jones picking up her second first finisher at Myrtle, congratulations to her.

7 brand new parkrunners bravely turned out on this chilly day. Congratulations to Cathy Hulin, Melanie and Harry Marples, Emily O’Connor, Macy Plunkett, Victoria Raw and Robert Allan. Your Saturday mornings will never be the same again. Welcome to the family.

There were 38 runners new to Myrtle and there was an incredible 45 shiny new Myrtle parkrun PBs. I’m assuming the local shops will run out of prosecco!

A special mention to Maureen Wells, a VW75-79 (Hope she doesn’t mind me mentioning that) on her 122nd parkrun.

And now time for a personal report from me, Scott Leach, your guest report writer for this week.

The news reports this morning promised yet another weatherpocolypse, this time in the form of “frozen rain” (Very different from snow apparently) so I arose from a warm bed with some apprehension before looking outside on… very calm skies.

I had chosen Myrtle parkrun to be my 41st different Yorkshire parkrun on my journey to Yorkshire regionnaire status (currently standing at around 50 venues depending on your definition of “Yorkshire”) and I set off from Leeds wondering if I would skid all the way past my workplace in Shipley and straight in to Bingley, through Bingley, out of Bingley and come to a halt in Lancashire. I didn’t as the weather demons had obviously decided to stay in bed to avoid ruining our parkruns. Jack Frost, however, showed up with all his mates carrying fridge freezers and the temperature stayed in its boots.

As I arrived in Bingley after 10 days without running and still with a pretty bad cold, I told myself to behave with no racing! I just about managed it.

Fitting a parkrun in such a small and beautifully formed park was obviously a challenge for the core team and it has been pulled off with aplomb as the route twists in and around Myrtle and manages to pull off the fantastic trick of seeming like it’s mainly downhill. In fact, the start is furiously fast as you head off down the first hill.

Mercifully the run briefing was short on such a chilly day and I was assured that as long as I remembered to go around the bandstand 4 times I would be fine.

I tried to keep my run as casual as I could and I was slightly surprised to see the front runners only a little way ahead of me as the 1km mark approached. That of course didn’t last too much longer as my lungs began to complain, but I was buoyed by the cheery marshals calling out encouragement and occasionally asking us to keep left.

The 4 laps passed in a blur of wheezing, snot and sweat as we a crossed tarmac and grass and went uphill and down dale. Eventually I was cheered through the finishing funnel in 8th position and I tried my best not to cough and splutter on the officials.

Another Yorkshire parkrun ticked off and yet another perfect parkrun day.

Yes, we will be putting on a New Year's Day parkrun!  The start time will be 9am.