What started off as a damp September morning, with just one shower whilst the volunteers were setting up, stayed dry for the 70 participants and 21 volunteers.

There were some milestones to report today with Stephen Large visiting Nant y Pandy and completed his 50th parkrun with us today.

Two of our volunteers, first mention goes to Emily who was on her 50th volunteer role having bar code scanned for most of those weeks. Geraint was on his 25th volunteering role and has volunteered for us at Nant y pandy in various roles to include Run directing.

This week 70 people ran, jogged and walked the course, of whom 26 were first timers and 15 recorded new Personal Bests. Representatives of 22 different clubs took part. 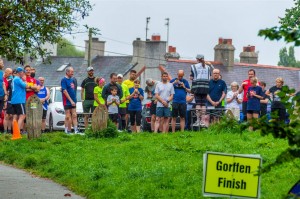 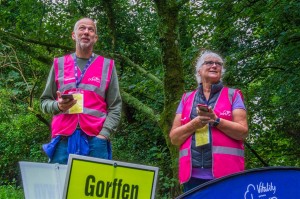 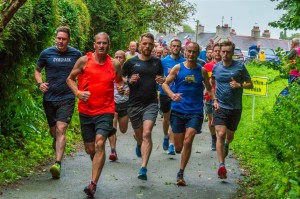 It was a cloudy but mild September morning, with very little wind so pretty good for a parkrun. The course had been checked and we were ready to go. The quiet calm of the empty car park soon changed as the runners began to arrive. It wasn't long before a small crowd had gathered chatting and laughing as the excitement grew in preparation of the start. The chiming of the church bells signalled the start of the run, and they were off, all 95. It was only a wait of just over 18 minutes before the first runner Benjamin Moye was crossing the finish line. We then had a steady flow of runners to keep the volunteers busy.

I would like to thank all the runners who attended this morning event, but especially to our tourists parkrunners who traveled here to Llangefni. We welcomed runners from Prestatyn, Abergele, Scotland, different boroughs in London, Yorkshire, Suffolk, Oxfordshire, Manchester and Cheshire. I hope you enjoyed our beautiful course, and please visit us again in the future.

Well done to all 95 runners who took part this morning, 9 of whom achieved a new Personal Best. We look forward to seeing you all soon. 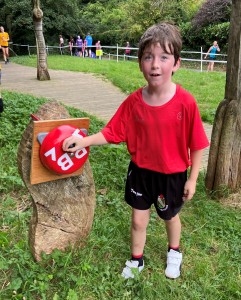 I would once again like to thank our fabulous volunteers who come out in all weathers to ensure this event goes ahead each week. Congratulation to one of our junior members - Aron Rhisiart who last week volunteered 25 times and will now have the honour of wearing a purple celebration T Shirt, da iawn ti. As I mentioned in the pre run briefing we are always looking to recruit new volunteers (our high-vis heroes), so if you are interested in giving it a go please take a look at our volunteer roster online and drop us an e-mail at nantypandy@parkrun.com

This week 95 people ran, jogged and walked the course, of whom 50 were first timers and 9 recorded new Personal Bests. Representatives of 32 different clubs took part.

Run report by Andy Norman, visitor. 253 parkruns at 104 locations. Home parkrun Worcester. Honoured to write this run report on the third anniversary for this event and the return of parkrun to Wales after a 17 month absence. 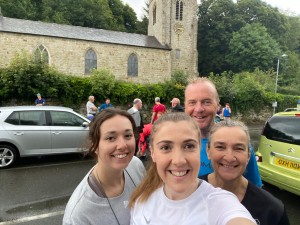 Staying in North Wales for the week so seeing many of the parkruns closest to us were not ready to re-open, decided on Nant y Pandy. Offered to do the run report and was advised by the Event Director it would be quite a contrast to the other parkrun I had completed in the area at Conwy!  After looking it, up saw it was approximately 450th hardest of 580 parkruns so a challenge after the flat courses of previous weeks.

On the 55 minute drive to Nant y Pandy I thought of facts I knew about Anglesey. It is the biggest island off England and Wales and has a place with the longest unpronounceable name starting with Llanfair…. What did Nant y Pandy mean? Looked it up again and apparently, mill on the stream. Not to be confused with Pontypandy, which means bridge on the stream and is where Fireman Sam carries out many a heroic deed. (I have a 2 year old grandson who is a fan!)

After popping into Asda we met the first cheery Marshall who showed us the way and said ‘it’s turned out nice?’ We did not share his optimism at that point after coming through a cloud burst en route but it had stopped raining. Park runners eagerly congregated in the car park by the church, unsurprisingly much higher numbers than the average of 75, including a number of visitors from places including Warrington and Aylesbury. A joint welcome and first timers briefing by the RD and after a request to start in order based on your time, as the route was narrow, we were away.

The route started along a path into the dingle, a wood inhabited by red squirrels. I was aware the route was undulating but understood this was at the start and finish being an out and back route. After the first hill I asked a fellow runner in a Cymru shirt if that was it for the hills on the way out but as always the case I had asked a visitor who could not help. Think there was another hill then a big down slope which I suggested to my running partner we needed to remember for the way back. My running buddy this week was my daughter, quickest of our 4 person travelling group, who had managed a pb of under 28 minutes last week, so I knew I had my work cut out to keep up with her.

The route continued along a beautiful path through the canopy of trees, then along a boardwalk and to a dam at the end of a pretty lake. This was the turn around point, but not yet as the path first twisted left then right before eventually, we were heading for home.

The five marshals on the course were great, clanking cow bells, greeting us in Welsh and generally so encouraging. As we headed back a few runners went past us which suggested we were slowing a little and then with one km to go we hit the hill. We knew it was coming and we managed it but it was tough! One more hill then the finish line came upon us quicker than expected to prevent my Bolt like finish. Came in under 30 minutes so best this year and not bad as carrying an injury.

Lovely marshals at the finish too, ‘Did you enjoy it?’ ‘It was certainly an achievement,’ I responded. Waited for our other group members to complete and a shout out for my good lady who is a 35-40 minute runner and despite being beaten by many who had to walk, ran every step of a challenging course.

This week 170 people ran, jogged and walked the course, of whom 92 were first timers and 20 recorded new Personal Bests. Representatives of 34 different clubs took part.

But perhaps the participants richest from today’s event were the Tail Walker and the parkrunrunner with her (who is recovering from injury) who were fortunate enough to see one of the wonderful red squirrels on their return journey towards the finish line.

For us it was breakfast at Mona’s where we discussed what a great course this was and probably goes into my top 10. It would have been even better if we had seen a red squirrel so we returned for a walk through the dingle and 3 squirrels obliged!

Big thank you to all at Nant y Pandy parkrun especially on your third anniversary but also for getting your great event going again.

After so many months away from our regular Saturday morning parkrun, this weekend’s relaunch event seems to be hurtling towards us at breakneck speed! Needless to say, we are working hard to prepare our return to be as safe and enjoyable for everyone as possible.

Our thanks to the group of volunteers have been out this week to ensure that the route is as clear as possible from the greenery that has been encroaching across the paths - we want to support all participants to maximise the available space! 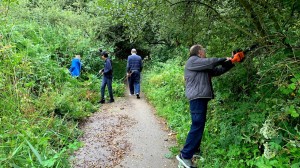 The return of many Welsh parkrun events happens to coincide with our 3rd anniversary at Nant y Pandy, so please feel free to come along in fancy dress and participate in this double celebration with us – due to Covid, we have only managed to celebrate one anniversary together, so let’s make this one to remember! 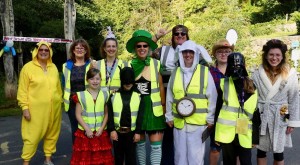 We are delighted that there has been such positive feedback about the return of parkrun events, and we are looking forward to welcoming lots of visitors to Nant y Pandy, alongside our local community. With the potential of greater numbers than we are accustomed to, please do your best to support the volunteers, who are there to help everyone safe and well!

Please be gentle with us during the first few weeks as we get back into the swing of things after such a long time away. Please also do your best to support the volunteers and each other to follow the Covid-19 Code. 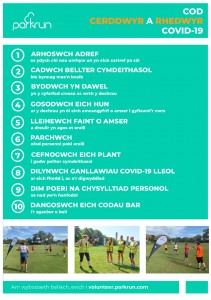 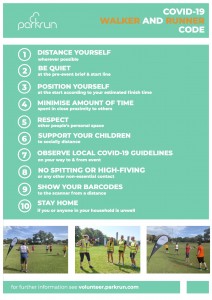 All parkrun volunteers will also be adhering to the parkrun Covid-19 Code for Volunteers: 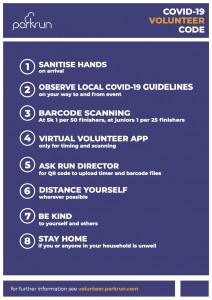 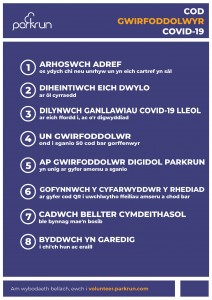 If you are unfamiliar with the area and are unable to arrive in Llangefni on foot, please take a look at the map below, which highlights the start and finish of Nant y Pandy parkrun (red cross), the one-way system around the centre of town (blue lines), the alternative public car parks (orange outline) and how to access them (green arrows). The starting area can be accessed from the back of the Station Yard car park (yellow arrow). If necessary, we have volunteers on standby to help guide you to suitable parking areas, but please park considerately. 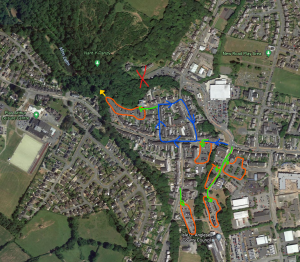 If you are joining us on Saturday, you will notice a few changes around the start and finish of the event (along with our new pink, hi-vis vests!), including a rearranged finish funnel to encourage social distancing. We will also have extra volunteers located around the finish area waiting to scan your barcodes. Please simply hold your barcode and finish token out to the volunteer and drop the token into the bucket once scanned.

Whilst all scanning and timing will now be done using the parkrun Virtual Volunteer App on volunteers mobile phones, we are still only allowed to scan printed barcodes (paper or wrist bands), so PLEASE bring your barcode with you. You can reprint one from your account here: https://www.parkrun.com/signin/ or if you can't remember your sign in details, you can reset your password here: https://www.parkrun.com/resetpassword/

Finally, I’m sure we mentioned it, but...

First of all, I would like to thank you all for supporting our event and also supporting our decision to change how the tokens are distributed due to the escalating situation regarding Covid-19.

It was a reasonably dry day today with just the odd shower, the volunteers only had to put their hoods up about twice!

96 runners joined us to today to run, job and walk the course. 21 got a PB and a special mention goes to the local Couch to 5K group graduating and continuing their running journey. There was cake all round for everyone after their run.

We had visitors from as far a field as Portsmouth, Warrington, Leicester and Rhayader welcome to you all.

This week 96 people ran, jogged and walked the course, of whom 21 were first timers and 21 recorded new Personal Bests. Representatives of 9 different clubs took part.