Last week a group of tourist park runners were fortunate enough to visit the Royal Victoria Country Park for the 382nd Netley Abbey Parkrun. By complete coincidence for me it was also my 382nd parkrun. It is a beautiful park on the banks of Southampton Water with great views of the waterfront and shipping on passage to and from the docks. The site itself is historic being the home to the former Royal Victoria military Hospital which closed in the 1960’s and was demolished following a fire; however a significant part of the huge building still standing is the prominent chapel.

We had wanted to do Netley Abbey parkrun last October and planned to arrive by yacht and dinghy; however our original date unfortunately coincided with Storm Harry so we abandoned it until the Spring. Our runners home runs are Bushy Park, Maidenhead, Reading and Netley. The rest of the team were Stuart Thompson on 351 runs, David Hollinshead on 186 runs, Juli Wood on 113 runs, Nick Baggott on 88 runs and Sarah Greenhalgh on 16 runs. 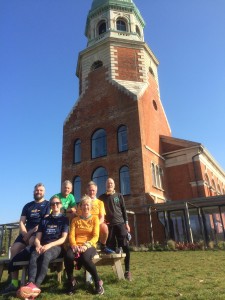 The run itself comprised three laps of a figure of eight loop with a small ascent. Conditions were perfect with blue sky, sun and a gentle breeze.

There were 317 runners in total and a warm welcome was given to the 11 first timers doing their first ever parkrun - Samuel Middleton, Adam Nagy, Andrew Sharp, George Phillip, Matt Lovell, Victoria Palfrey, Amy Street, Katie-Mae Lush, Tim Lush, Gregory Hill and Kathryn Lea. In addition 31 Tourist runners were running this parkrun for the first time. There were 52 new PB’s including Archie Smoker in the junior category completing his 10th parkrun.

Congratulations are in order for Melanie Captain on her 100th run and Rachel Sutch and Mike Sharp on their 150th runs.

First home in a very respectable 18:05 was Alun Hanford and the first female in 19th place was Tracey Corker in 21:06 who also achieved the highest age grading of the day at 79.46%. Tracey has many first female positions to her name and she is the second most frequent to finish first at Netley.

After our run we used our dinghy to get back to the yachts and following breakfast on board enjoyed a brisk sail over to Cowes. And the best bit came later with a very special Parkrun cake baked by Juli Wood. 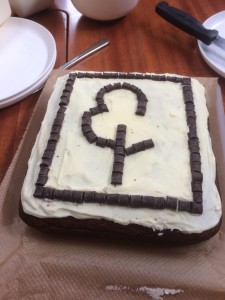 We thoroughly enjoyed our time at Netley and recommend this parkrun: we hope to come again.