Many of you will know that parkrun HQ have always given local events the option regarding holding events on Christmas Day and New Year's Day.

We have just confirmed today (15th Nov) that we will be holding an event on both days subject to the course conditions being kind to us (i.e. not waterlogged) and having sufficient volunteers available.

The eagle eyed amongst you will already know that both days fall on a Saturday anyway and all aspects of the event will be as per usual with a sprinkling of festive cheer. Please feel free to come along in your favourite festive outfits!

Both events will start at 9am as per usual and if you are free to volunteer please get in touch with us by email at newearswick@parkrun.com

Many thanks to the team at the Sports Club for their support as we wouldn't be able to hold events without it.

Do you ever get a sense of impending doom, when you're out for a run? Or a jog, walk or even drive... that feeling that somehow, somewhere, sometime, you're going to go wrong. Turn left instead of *other* left. End up going the wrong way round a field. Or miss a cut-through altogether. Thankfully this could *never* happen at New Earswick parkrun - partly due to the clear description of the course from the "first-timers'" briefer, partly due to the friendly, cheering marshalls at every key location, and partly because they'd given me stakes, arrows and tape to lay out - but not let me do it unsupervised!

As we waited for the off, our main concern was to get round before that menacing rain cloud turned New Earswick into a scene from Evan Almighty. Everyone was keen to beat the rain, from the (literally) millions of runners in "parkrun 250" vests, to a bloke back for his first parkrun since the Pandemic, via Camilla, tail-walking so she'd have enough legs for the Great North Run the next day! We were chomping at the bit... and what a privilege to be able to run the course at all! Literally. A little bird called "Run Director C" - no, that's too obvious, let's just call him "Clive" - this little bird told us the padlock code on the gates had been changed, and if he hadn't managed to get the attention of a bloke with a roller...

Anyway, here we were, enjoying the fresh headwind and (as it turned out) the total lack of rain, for the *only* park run in York shaped like an hourglass! Slightly less interestingly, it's the only one of York's 3 courses where you can see the Minster. And the only one with a tantalising smell of bacon, coming from the club house, every single time you pass it! Dogs have to keep their owners on a *very* short lead for that bit.

I think New Earswick is the only parkrun in England, the UK, possibly the World or Galaxy, that has its own Mystery Voice. Listen out for it, as you pass along the far hedge, on the second field, on your second lap. Some say it's the voice of Roger Bannister, encouraging Chris Brasher to keep up. Others say it could be Usain Bolt, giving Colonel Custer some long overdue advice. All we know is - it sounded Yorkshire. "Run faster" the Disembodied One shouted, from behind the hedge. "Run faster!"
Well, we tried the time-honoured "Come and join in!" but the Strangely Formless One wasn't having any.
"Run faster!" was his only cry.
One day, the mystery will be solved - and we'll find out we ruined a million-pound advert, being filmed by a trail shoe manufacturer. Or that it was a local, out walking his dog.

Of course, all events end with a list of times - and we'll get to the results in a minute. But first, a huge 'Thank you, marshall!!!' to all the great volunteers: setting up the course, cheering us on our way, stopping us getting lost, scanning our barcodes, packing away at the end... Anyone can volunteer, there are loads of opportunities available, and without folk willing to help out, New Earswick parkrun just wouldn't take place! So, this week's Volunteer Wall Of Honour (will YOU be on it next week?) is as follows:
Alison MELTON • Camilla GRAYLEY • Charlie GOODWIN • Charlotte NEWCOMBE • Clive WOOLLEY • Duncan CHAMBERS • Eleanor BALE • Karen THOMPSON • Marie BARKER • Peter GRAYLEY • Rachel LUNAM COWAN

We are going to get the results in a minute, honestly, but there are a couple of even MORE important things to celebrate first...
The 20 parkrunners doing New Earswick for the first time!
The 19 non-newcomers to The Hourglass (can we adopt that nickname for the course? Just for a bit of fun?) who got PBs!
And Mary Liversidge and Hazel Burton, both clocking up their 50th parkrun!

And now, the results.

Well done all, hope to run with you again at The Hourglass sometime soon - and solve the identity of the Mystery Voice of New Earswick, once and for all! 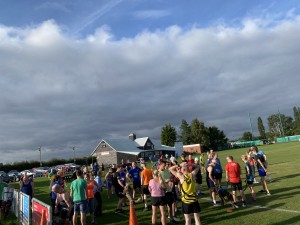 It was amazing / astounding / incredible (delete as appropriate or add your own word) to meet on Saturday for the first parkrun since 14th March 2020. Who would have imagined it could have been so long? The weather was pleasantly cool and cloudy but faces on the field were smiling with delight as 140 runners, joggers and walkers met up at a (sigh) social distance for the first time in 14 months / 497 days / 11,928 hours / 715,680 minutes as a community of runners.

The short, new runners briefing from Alison for the 61 first timers who had come from near and far to join us was followed by a briefing at top speed from RD Ben (2 minutes time limit. It’s amazing how many words he managed to fit into it). Rounds of applause followed for the new runners, our amazing committee and our volunteers and lastly for ourselves for being there. Then, with ‘Whippets’ at the front as instructed, we were off with a wild cheer.

New Earswick is the only parkrun in York from which one can see York Minister. It is a figure of 8 circuit on grass. Thanks are due to whoever had cut the grass for us and to the folks at the club house who provided refreshments for sale afterwards. As we completed our 2 ¾ circuits, there were friendly words of greeting and encouragement from passers-by and marshalls and even from the odd dog.

And now for the results.
First of all, an amazing ‘Well done’ to Elaine Livera from Dark Peak Fell Runners who set a new female course record of 18mins 49.

The first three men back were:
Malcolm Muir from Ilford AC in 18min 17, followed by
Rob Ward of York Knavesmire Harriers in 18min 46, and
Charlie White in 19min 10.

The first three women back were:
Elaine Livera from Dark Peak Fell Runners in 18mins 49 (wow!) followed by
Molly Savill from Horsforth Harriers in 21min 55, and
Sophie Carter who gained a new PB with 22min 21.

Well done all of you.

Other thanks are due to
• The volunteers, committee members, Postal Harriers and Fitmums who turned up on Wednesday, for a ‘dry run’ of the event and made our first parkrun back possible. The weather may have been rather warm, but you all arrived with enthusiasm and smiles. Thank you.
• Our volunteers on the day: Benjamin Briffaud, Emilie Champigny, Danny Chan, Tim Franklin, Jeff Harris, Katherine Himsworth, Philip Jackson, Jennifer Long, Grace Lovatt, Alison Melton, Simon Middleton, Fiona and Neil Strange, Lucy Turner, Robert Ward and Clive Woolley
If you would like to volunteer, get in touch via our website or contact Ben on a Saturday.

See you all at event number 90 next week - who knows, there may be another course record set!

We are joining hundreds of other parkruns in celebrating International Women's Day on 7th March.

It would be great to see all our amazing women there on the day and please bring family and friends with you, especially if they've not tried parkrun before.  There will be a This Girl Can selfie frame to help you capture the moment after you've finished.

Saturday morning.  The sun’s shining (well, somewhere in the world), the wind’s blowing (but only a bit) and it’s rained gently in the night.  What could be better than joining 79 other people to run, canter, trot or jog around the two and a bit laps of New Earswick’s 87th parkrun?  What could be better?  Well, joining Sam for her 250th parkrun and Pete for his 200th with the promise of cake at the finish line!

So, after a brief briefing and rounds of applause for all our amazing volunteers, we set off.  New Earswick has a double lure.  1. It’s the only parkrun where you can spot York Minister highlighted against the sky.  2. The entrancing thoughts of coffee and breakfast at the Folk Hall carry around to the end of the course.

# Free hot drink with your breakfast for all parkrunners with barcodes!

And, although the sky was gloomy, the rain stayed away for us as we ran, jogged and chatted around the route which encompassed its very own mud slide today.

Today there were 12 first timers - nice to see you all!  And a special mention for Nicholas, Alex and Jess doing their first ever parkruns.  Congratulations for completing the course.  We hope to see you again next week.

February is the second month of the year - Alistair and Carolyn completed their 2nd ever parkruns and Pete Berry was 2nd runner in.

Today was the 8th - well done to Neil who came in 8th place and also to the 9 people who achieved a new personal best.

A round of applause and well done to you all!