Event number 3-2-1 go! Well, it amused me. It's a good job I had something to smile about because my, was it cold on Saturday. Despite that, a brave 222 runners turned out and ran or walked our beautiful course. The cold spurred 24 of you to PBs - well done! Just before the start there was a nasty hailstorm, but we were spared any precipitation during the actual run. A massive thank you to the volunteers who stood out in the cold to bring you your Saturday morning exercise. 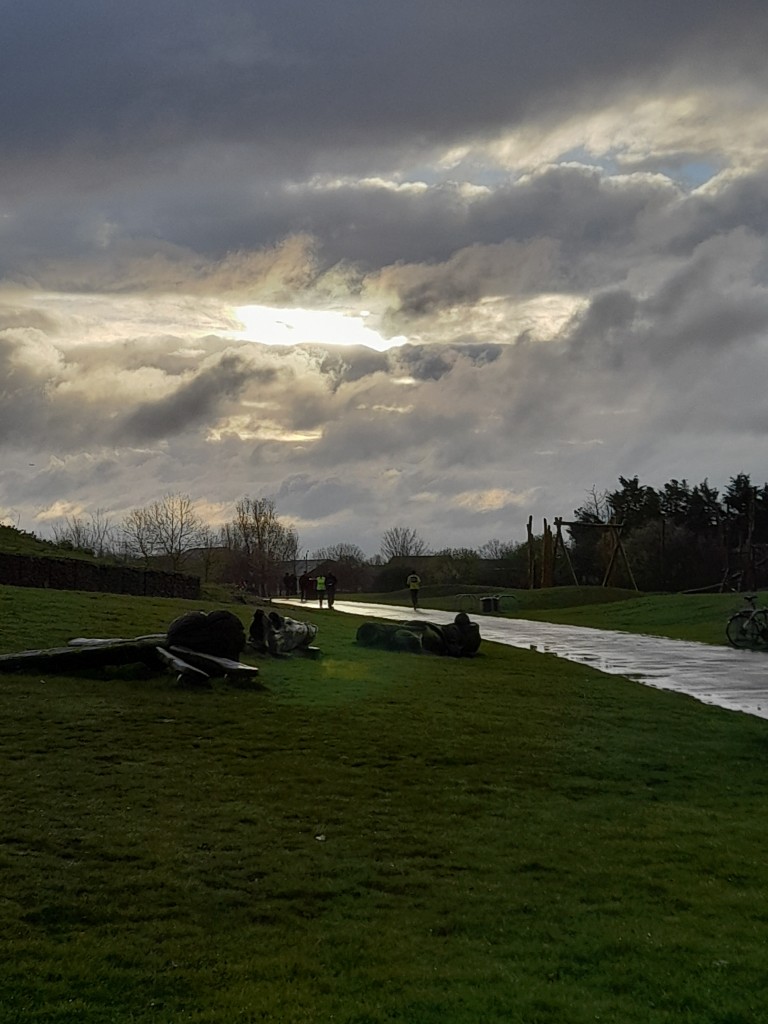 The weather scared off most of our first-timers, with Chris only having three intrepid souls for his briefing: 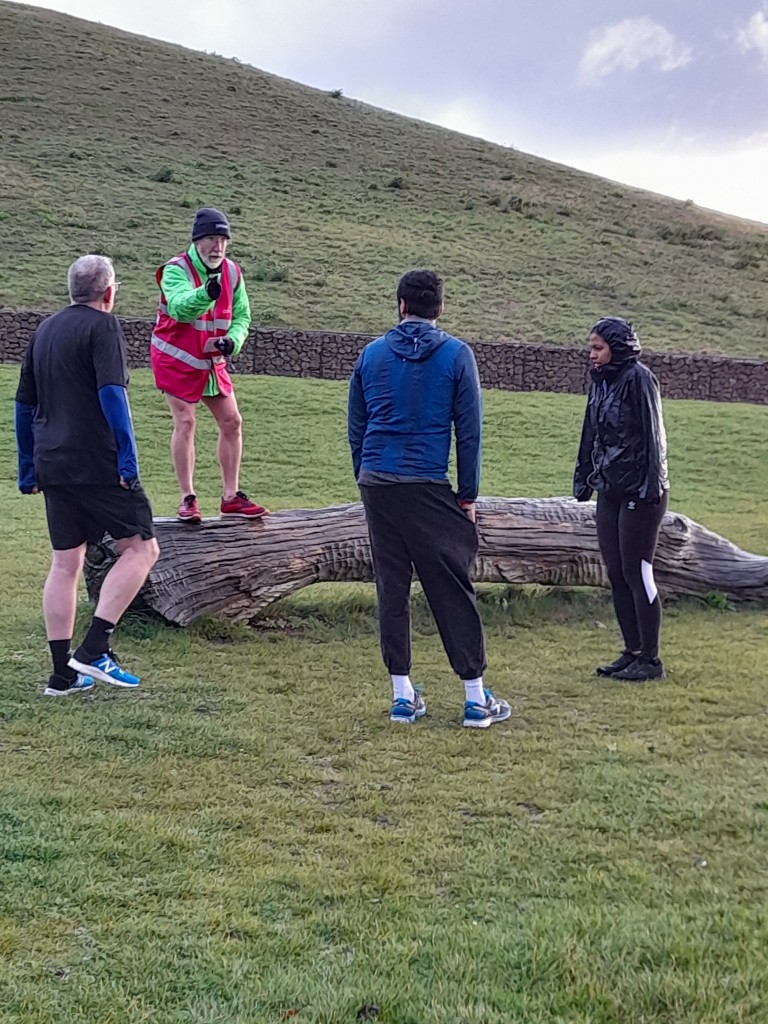 Chris briefs the first-timers "the weather's usually better than this"

Aditi ARYAL was celebrating her 50th run this week and I notice that Santosh is coming up to a pretty big number soon. He'll have to wait, though, as he's RD next week. This week saw the breaking of one of our age category records also - congratulations to Angela DUNCAN, who smashed the VW80-84 record with a speedy time of 35:49 - age grading 76.17%!

At the other end of the age scale, here are some parkrunners in waiting. Good to get them started early! 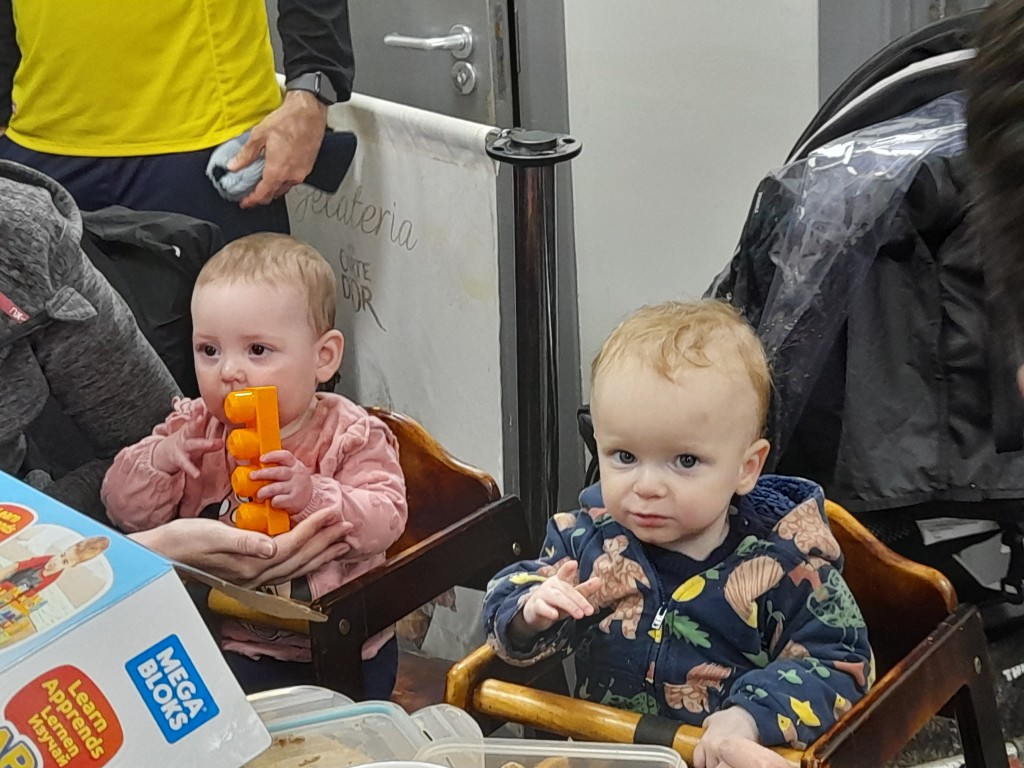 parkrunners of the future

You will have noticed Ian following me around this week. He's a Run Director in training, and will be taking the helm for the first time on 11th December. Please consider volunteering to give him an easy start. Volunteer here: northalafields@parkun.com

Don't forget you can also sign up for our Christmas parkrun. Extra mince pies for the volunteers.

See you next week!
Lindsay

This week 222 people ran, jogged and walked the course, of whom 30 were first timers and 24 recorded new Personal Bests. Representatives of 22 different clubs took part.

The event was made possible by 29 volunteers:

Lovely morning for a parkurn, great running conditions! It certainly seemed to be appreciated by our runners, 33 of whom got nice new PBs for their efforts! We had 4 absolute first timers (welcome, we hope you'll be back), and 13 people who were visiting for the first time.

As well as our first timers, at the other end of the spectrum we had some people with an impressive number of parkruns behind them, Leading the field for the ladies was Louise Brown, with 379 parkruns (Louise also topped her age group this week, with a time of 24:35). Even that mighty number pales into insignificance when compared to our men - top of the field was Tony Merritt, with a massive 517 parkruns to his name!

Impressive though they are, neither of these are "official" milestones. We had some of those this week.Top of that field is Rosemary Leno, who celebrated her 250th parkrun. 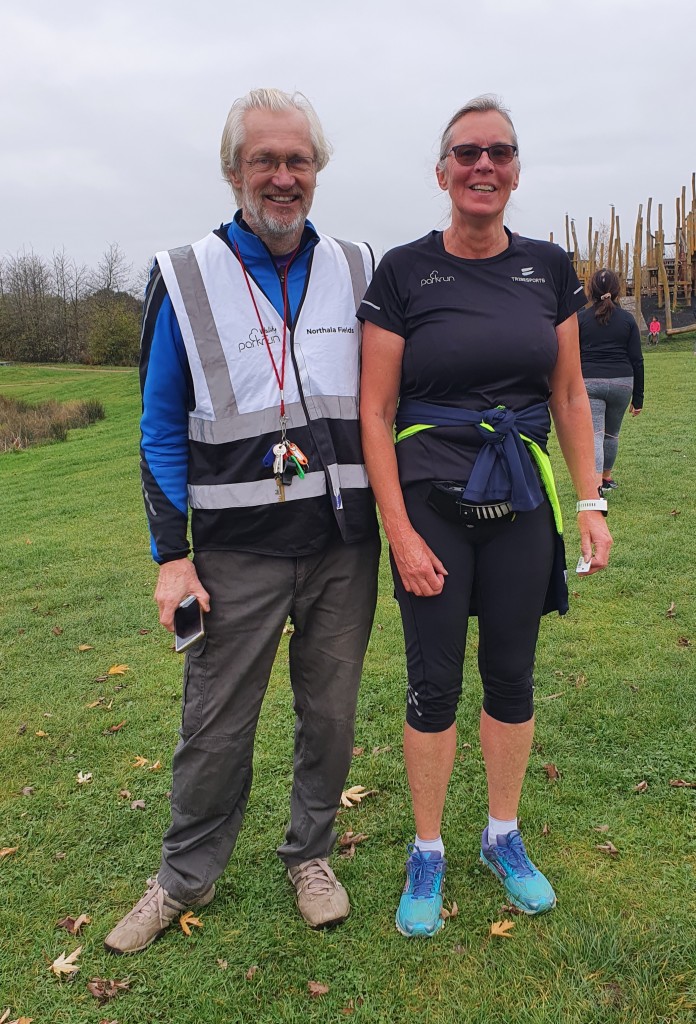 We also had Eileen Williams doing her 100th run, and both Jennifer Hay and Nathan Yip doing their 50th runs. Nathan celebrated in style, by topping his age group with a new PB. Well done, Nathan!

Showing that parkrun is for everyone, we had 255 participants this week, spanning age groups from under 10s to the 80-84 years, with Pete Warren and Angela Duncan representing those categories. The only age group not represented was 18-19 year old men, so if you know any please encourage them to come along next week.

Talking of next week, Lindsay is in charge on the day, and it would be lovely to be able to hand over to her with a full roster - it's pacer week, so it would be great if we could have a couple of timers, finish token (and finish token support) and some barcode scanners to make sure any PBs get recorded! Marshals to cheer you all round and ensure participants' safety would be good too.

See you next time,

What a beautiful morning for a parkrun!

The mixed weather of November can produce some beautiful conditions for running, and make for some great panoramic shots! Did you manage to catch sight of the rainbow? If you didn't, pop over to our Facebook page where you'll find an album of photos from this Saturday's event, complete with the rainbow. Almost everyone was caught on their way down the hill, so see if you can spot yourself. 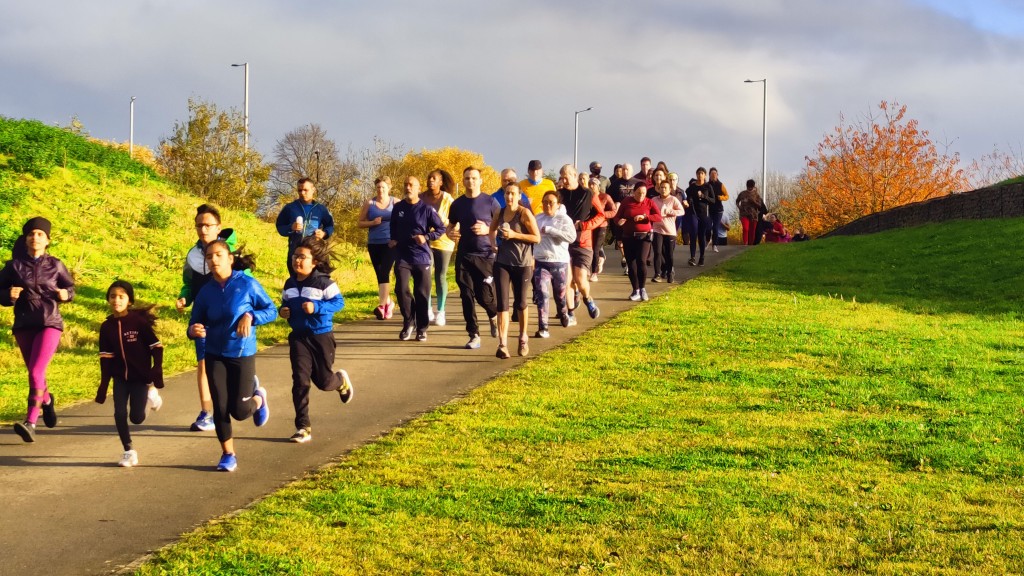 You might wonder why everyone was running so fast? Not just because it's parkrun... Probably because they were being chased by a dinosaur! Regular runner, Bobby Mitchell, was doing his 100th run. You may have seen him before, marshalling as a dinosaur, or even pacing (although even Bobby doesn't pace in his dinosaur costume!) Bobby wasn't  the only parkrunner marking a milestone on the day, Jariya Campbell was celebrating run number 50 and Hangma Rai was running her 200th run. We've also got a few parkrunners approaching milestones, so watch this space! 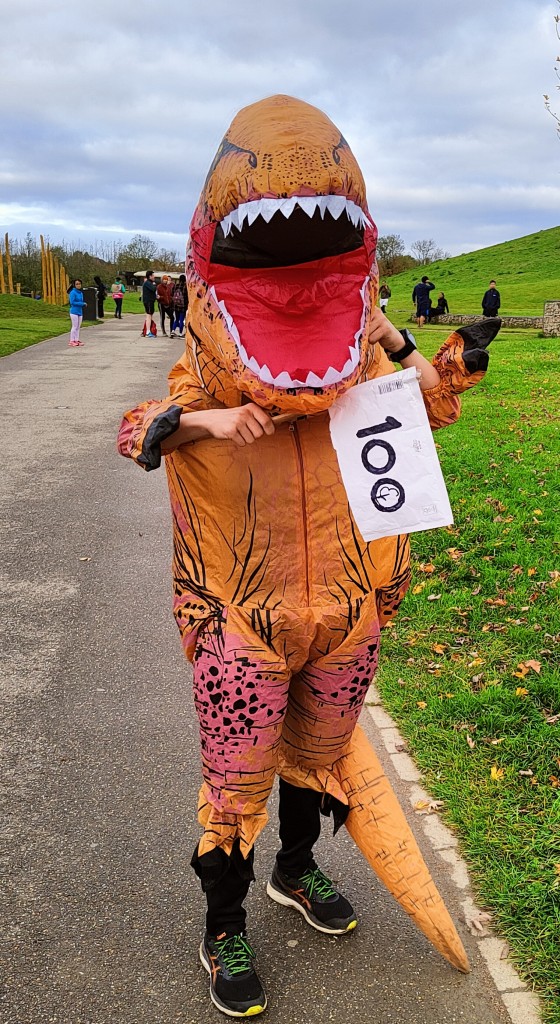 There're 5 more runs between now and the Christmas Day run, including the return of Pacer Day. The roster is currently looking a bit thin for all of them, so why not have a look here and book a volunteer spot, is easy to sign up, and great fun (and we can't put on a volunteer-led event without volunteers...)  Next week Philip is in charge, see you then!

This week 304 people ran, jogged and walked the course, of whom 34 were first timers and 42 recorded new Personal Bests. Representatives of 25 different clubs took part.

Better weather this week, and perfect weather for running, as evidenced by the 42 runners who got PBs. Well done! We had a full roster in the end; big thanks to all who helped. We do need around 25 people to put on the run, and it’s a big help to the RD if they know they have enough people earlier rather than later. Volunteer here: northalafields@parkun.com

It was David Goodenough’s 250th run. David has been parkrunning since 2007, since before it was even called parkrun. Thank you for the chocolates, which were much appreciated. Also celebrating were Andy Frith for his 50th and Nigel Blades for his 100th.

Christmas Day falls on a Saturday, and I’m pleased to announce that we will be holding parkrun as usual. Feel free to bring cake and mince pies; there’s usually a fabulous atmosphere at our Christmas Day run. It will be especially nice this year after not being able to put on an official run last year. New Year’s Day also falls on a Saturday, but we won’t be holding a run that day. We decided that those of us who want to run would welcome the opportunity to parkrun somewhere else, and those of us who want to stay in bed would do so.

See you next week, when parkrun will be brought to you by Philip.

This week 271 people ran, jogged and walked the course, of whom 22 were first timers and 42 recorded new Personal Bests. Representatives of 20 different clubs took part.