Hello! And welcome to the rather late and rushed race report of Northampton’s 354th Parkrun. I offered to do the race report this week but only realised a few hours ago that I was actually doing it. So, without further ado, let’s do this!Is it spring? When I stepped out this morning to see how many layers I should put on I was startled by the mildness of the temperature. (I’m easily startled!) So it was the first shorts and short sleeve run of the year as I and my daughter headed down to the Racecourse to be greeted by a myriad of friendly faces.As usual we were running late which meant I wasn’t able to find out where my run buddies Andy Green and Chris Bell had been on their running travels. Andy is in the process of setting records for men aged between 55-59 across the region. Hats off to you sir! I hope I’m doing as well as you when I hit that age bracket and try to match your times!It was a brief pre-race briefing this morning with shout outs to the pacers who had kindly volunteered. It was Mark Rose’s and Graham Laurie’s 50th run, but, unbelievably, they were our only milestones this week. We did have 16 first timers to any parkrun – welcome to the best decision you’ve ever made; you’re body will thank you in a couple of months! – and an extraordinary number of PBs (more than I can count!)Although it was a mild morning, there was once again a bit of a headwind as you ran down St Georges Avenue. (The wind must have blown away the apostrophe!) But, come wind or shine, the indomitable Bryan Lewin was heroically cheering on all the runners on his corner. I had the honour of taking Bryan’s post once and had just about the greatest hour of my life. Although I was freezing, the positive psychological effect of being thanked by several hundred people in such a short space of time was miraculous. Not only can I not thank our volunteers enough for all their kind efforts every week but I would also massively recommend taking a turn as a marshal if you haven’t already. It is an incredibly heart-warming experience.We are, as always, hugely grateful to the volunteers who made this event happen: Helen ANDREWS, Leigh BARKER, Fiona BARRETT, Gerald BILLIS, Oliver BIRCH, Matt BUSHELL, Becky CARRIER, Bobby CHATTERJEE, Oli CHERRINGTON, Benjamin CRAWLEY, Mark DEAN, Paul ECCLES, Daniel GILLERT, Mary GRIFFIN, Lynette HILL-PARK, Rachel ILSLEY, Alison JOHNSON, Stephen JOHNSON, Bryan LEWIN, Michelle LEWIS, Szabolcs MATE, Connor MCLEAN, Henry NEWBY, Viv POOLE, Alison POSTLETHWAITE, Anthea RADDAN, Mark RADDAN, Alastair RAPLEY, Frances RIX, Elaine STARMER, Alfie STARMER, Marie TIMMINS, Lizzie TIMMINS, Mark TIMMINS, Peter VICKERS, and Neil WHITE. Thank you! 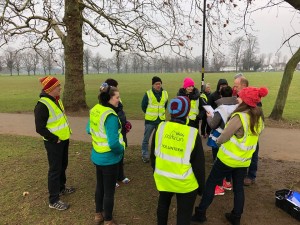 The run (it’s not a race!) was completed by 445 fabulous participants. First was Dominic Jones in the incredible time of 15.27. This means he immediately goes on the all time fastest list in 4th place! William Gardner must feel a little aggrieved not to finish first as his time of 15.32 puts him 5th on the all time list! It must have been quite a finish, and one that I was nowhere near!Amy Gamble, a Racecourse first timer, led the way for the women, achieving a superb 20.28. Tallulah Havard and Freddie Caspall were our fastest youngest runners. Amelie Purr and Sterling Green finished first in the 11-14 category. Trystan Barnett, who has a ludicrously fast PB for a 15-17 runner, came in 5th overall with a time just outside 18 minutes, and Christy Gillert was the first (and last!) female in the same age bracket.At the other end of the age range, the unstoppable Bob Emmerson was officially our oldest finisher in the incredible time of 43.54. I judge how well I am doing by where I pass Bob each week, and this week he was way ahead of where I usually see him. You are a marvel!We had five female runners in the 65 to 69 age bracket and Linda Toru was the first to cross the line in the superb time of 36.49. But well done also to Linda Kier, Catherine Hill, Anthea Raddan and Alison Johnson. Supreme efforts all round.At the end of the race there was just time to be patted on the back by the lovely Ilir Brecani and have a nice catch up with Glenn Robertson who was completing only his third run since injury put him out of action for 8 months and turned him into an enthusiastic spectator and supporter of parkrun. Finally, we watched the marvellous Rowan Stoddart sprint the final stretch of the run, before being followed in by the fabulous Gemma Burley and wonderful Tony Hill, who had pushed Rowan in his wheelchair for most of the way!Had I known at that point I was writing the race report I would have stayed longer to savour the atmosphere and taken more notice of who was ringing the PB bell. I struggle to take much in at the end of the run as I am always so exhausted. The marshals who hand out and collect in the finishing tokens are always so kind and look so concerned as I try to find the breath to thank them for their time and efforts. This week, as soon as I’d finished, an old friend, Gordon Smith, met me with a plastic bag filled with a jar of marmalade and a note with ‘Gordon’s Gubbins’ written on it. This turned out to be Gordon’s new blog which I highly recommend. Gordon’s a renaissance man and his blog offers ‘sport, music, travel and comedy; in mayonnaise!’ He suggested that next week I nobble the opposition by employing a scheme that he had learnt from Dick Dastardly in the Wacky Races! I’ll let you know how I get on!Thank you to everyone involved in parkrun. It has helped me physically and mentally, and always gives me something special to look forward to, no matter how hard it is to get round the course each Saturday!