After gorgeous weather last Saturday, this morning reminded me of the opening to Dickens’ Bleak Parkrun: “Fog everywhere. Fog up St Georges Avenue, where it flows among bollards and lampposts; fog down the football pitches, where it rolls defiled among the tiers of posts and nets and the pollutions of a great (and slightly dirty) town. Fog on the Racecourse. Fog creeping into the trees; fog lying out on the playgrounds, and hovering in the swings; fog drooping on the tennis courts. Fog in the eyes and throats of the parkrunners; fog cruelly pinching the toes and fingers of the hi-viz heroes. Chance people on the park peeping over the bushes into a nether sky of fog, with fog all round them, as if they were up in a balloon, and hanging in the misty clouds.” So, yeah, foggy. So foggy that I think Bryan got lost as he wasn’t marshalling his corner for the first time in what seems like ages. Hopefully he’ll find his way back soon!

We had 465 runners complete parkrun 355, while our sister run at Upton celebrated their first anniversary. Congratulations! Long may it continue. A few milestones this week. Flying into the fabulous fifties were Dave Horne (11th), Brian Morris (68th), Paul Thorneycroft (201st) and Dannii Levi (363rd). But achieving more parkruns than all these superstars put together was the stupendous Steve Cory who achieved a wonderful 28th place for his 250th run. 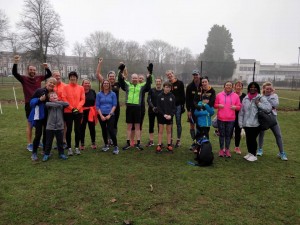 We also had a fantastic number of first timers to our Racecourse Run. High fives go to Jonathan and Jessica Hand who completed their first Racecourse, as well runs 247 and 235 respectively. Great stuff! The foggy, cold and slightly windy conditions did not seem to slow many of our parkrunners as loads of them achieved PBs. Particular congratulations go to Benjamin Crawley who achieved his third successive PB of the year, and Louise Hannam who walloped over 30 seconds off her best time to be the first female runner home. Alexander Law ran under 24 minutes for the first time and Jaclyn Robson ran her fastest ever race after 3 years of parkruns. Chris Lamb romped home first in just over 17 minutes and Jude Kelly was the fastest junior. Richard Fowler finished first for the over 50s. Jessica Kempton was the first female junior to finish achieving a new PB in the process, and Karen Farley-Goddard, completing her very first parkrun, was the first over 50 lady to finish. What a start and what a finish!

I was once again met by my old pal and erstwhile colleague Gordon Smith at the finish line. He explained that due to an administrative error the Wacky Races style diversion signs had failed to arrive. However, he had been on to the Acme company who had promised him a tunnel that can painted onto any surface in seconds. We’ll see! He also complained that by calling him a Renaissance Man in last week’s report he was going to have to sue me for deformation of character as everyone knows him as a cantankerous curmudgeon! As for the fog, it dissipated shortly after the runners and volunteers had left the Racecourse as they had found it (or possibly a little tidier) and I hope you all enjoyed the sunshine and blue skies of a beautiful February afternoon.