The last run report that I did was for Northampton parkrun #364, on 27th April 2019 – and we’ve not had one since #366 - so I thought it was about time for another write-up. But, before I get into Saturday’s event - #373 - I thought it would be appropriate to list a few ‘milestoners’ from the last few weeks who would have undoubtedly been featured (apologies for the lack of mention of the many ‘10’s and ‘50’s – and anyone that I might have missed). Alan Mould and David Pike have done their 100th; Richard Wild, Eric Symons and Trevor Berry have now completed 150; this trio have reached 200 - Gerald Billis, Jim Conroy and Neil Martin; Charles Corbett, Mark Kennedy and Kevin Evans have all accomplished number 250; and Lindsay Reeves, who has been part of Northampton parkrun from the very beginning, has notched up her 350th.

So to last Saturday … when, on the UK’s hottest day of the year with temperatures soaring and making it one of the warmest June days for about forty years, 33 people chose to start their day by participating, for the first time ever, in a 5k event around the Racecourse! In total, we had 60 first timers with us, out of the 508 runners, joggers and walkers looking for shade. Our first-time-at-Northampton visitors included Mark Jelley, who normally runs in the Exeter area, and the Edwards family (Paul, Alicia, Kelsey and Samara) – from Western Australia!

It was our monthly ‘5k Your Way, Move Against Cancer parkrun’ and we were again joined by members of Breast Friends Northampton - a support group for people, men and women, affected by breast cancer. We were also graced with the legendary presence of Elliott Line – who, for those that don’t know him, is (in addition to being an amateur actor, puzzle creator, mathematician and Spurs fan) a parkrun tourist and parkrun statistician (check him out on t’internet). His 22.51 run on Saturday was actually his second at Northampton – but he’s done 214 parkruns at 146 different venues in total… James Stringer, in 17.05, was first home. He, coincidentally, shares a PB of 16.53 with Andy Heather, who finished just five seconds behind James on this occasion. The first three females - Sophie Olejnik (21.01), Laura Campbell-Adams (21.08) and Katie Enefer (21.40) - all registered PBs! Katie’s excellent time puts her third on the all-time top performances for JW10 runners at Northampton. Andy Heather, Andy Green, Chris Bell and Madeleine Wain all ‘scored’ over 80% in that “indication of how well the parkrunner has done relative to their age and gender”. 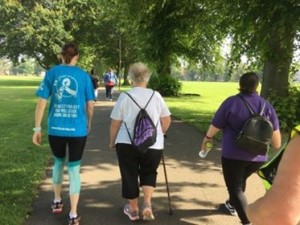 It was a trifle warm, and we all know it’s not a race – don’t we?! - but roughly one in seven of those taking part (71 altogether) still managed to register PBs. And the pleasure and pride of doing a PB is just as great wherever you finish; whether you’re Shaun Ledington in 12th place with 19.25 (fifteen seconds better than his previous, achieved in December 2017) or Lisa Whitestone (who started her parkrun career in January with 54.02 and is now down to 44.53). Ryan Adams (JM 10) smashed five minutes off his previous, to clock 27.57, Johnny Duffy (JM 11-14) is six minutes quicker (now 20.19) than when he started parkrunning in February and Hazel Dalley (JW11-14) is seven minutes quicker (23.03) than when she started parkrunning in March. Elaine Wood (VW60-64), in 30.55, and Oliver O’Leary (VM70-74), in 34.40, proved that age is no barrier to having ‘New PB!’ against your name in the results. And I must mention the incomparable Catherine ‘Northamptonshire Sport Get Active award winner 2018’ Hickford, who, with 36.50, has now recorded 27 PBs in the last two years. 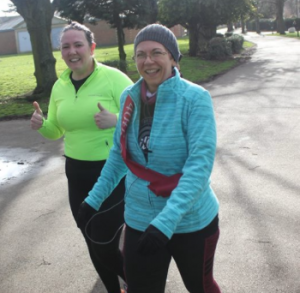 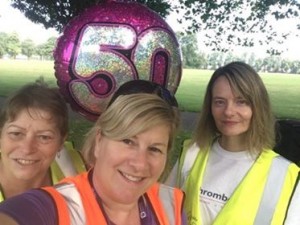 Milestones were achieved by Jen Scott, Susan Wall, Inderjit Kainth and first-timer Lois Eaton (50); Emma Baker did her 100th, David Everett did his 200th and Sally Hewitt, accompanied by family and friends of all ages, ran her 300th parkrun. Regular tail walker Sharon Conquer cheerfully carried out her duties displaying a ‘50’ balloon – signifying her 50th parkrun – but was amused (I think!) to be greeted at frequent intervals by runners wishing her a ‘Happy Birthday’ on the way round!

Thirty two volunteers made Northampton #373 happen … volunteers are always needed to act as funnel managers, barcode scanners, number checkers, marshals … put your name forward once in a while, it all helps. 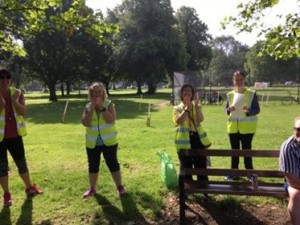