Northampton parkrun #1 took place, in May 2012; 120 took part and the 14 volunteers included one of our initial Run Directors, Helen Van Uem. Without the likes of Helen, this great weekly event wouldn’t have taken place … and on Saturday, Northampton parkrun # 375, when Helen ran her 200th parkrun, she was accompanied by 520 other runners, joggers and walkers, and supported by 48 volunteers, predominantly from the fabulous #fitfam group (who took over this aspect). The group is three generations of the same family with extended members who are friends that love to parkrun, run, swim, cycle (and even one member pole dances!). 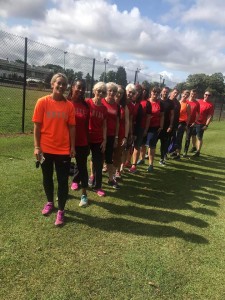 Helen wasn’t alone in celebrating a milestone.  For Lizzie Timmins, Kim Pusey, Christine O’Leary and Julia Valentine it was their 50th. Ian Coote and Mark Richards reached 100. Alongside Helen, Antony Hill and Ruksana Wade also ran their 200th parkruns (and Ruksana neatly matched her run, as the 30-minute pacer, with the 25th occasion that she has volunteered – finishing in a precise 30.00). On the subject of milestones, the following Northampton regulars have achieved notably big total runs since the last report and deserve mention – Kate Smith, Andrew Reed and Madeline Dunckley (riding a unicorn) - 100; Adam Crouch – 150; Drew Kimbell (all at Northampton) – 200; Nicholas Rose – 300. I would also have remarked on Mick Conroy’s 200th … but he seems to be a parkrun tourist recently (!). 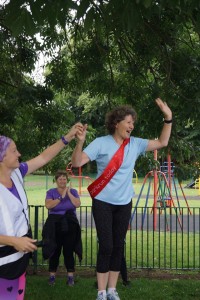 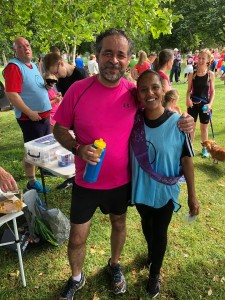 Christine before her 50th parkrun, Tony and Ruksana after their 200th parkrun.

Flying first into the finish funnel was Luke Greer in 15.32 – the fastest ever Northampton time for the SM20-24 category … and the equal fifth best time for anyone ever at the Racecourse! (And, I’m reliably informed, Luke ‘warmed up’ for this parkrun with a seven miler!). Runner up, Joe Vaughan (JM15-17), also notched a PB with 16.28. First lady, Katherine Baines, with 21.47, was a first timer with us (but she was actually completing her 265th parkrun, the majority of which have been at Bolton). Not sure if Jenny Baines is related – I assume so – as she was also a first timer with us, and had chosen Northampton to run her 150th. In total we had 47 first timers (24 were first timers at Northampton). Luke Greer, Joe Vaughan and Andy Green all registered over 83% on that Age Grade thingy.

On July 20 1969, the lunar module Eagle landed on the moon and Commander Neil Armstrong described the event as “one small step for [a] man, one giant leap for mankind”. Fifty years later, to the day, Robert Armstrong (no relation, as far as I’m aware) bravely stepped out (for the first time in nearly a year) to complete his eleventh Northampton parkrun in 39.05; but we had no-one with the surnames Collins or Aldrin taking part.

Last Monday, in an uplifting BBC TV documentary, Dame Kelly Holmes explored the rise of parkrun and the mental health advantages of running. Ours really is an event that enables hundreds of people to benefit physically, mentally and socially – so, please, think about volunteering occasionally. And to finish on a volunteering note – thank you to Lewis and Paul Armson for marshalling ‘that corner’, whilst I enjoyed a near-birthday run. 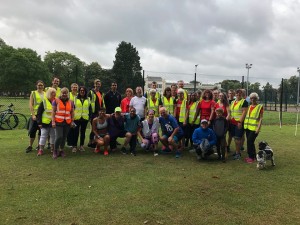 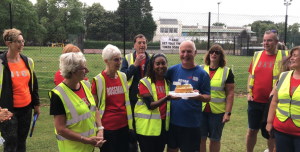