We are celebrating International Womens Day by encouraging you to bring along a female friend or relative on March 7th.

Whether volunteering, running, walking, or jogging, we would love to see more women and girls joining us and celebrating International Womens Day.

Many females sign up for parkrun but then take a long time to go and do their first event. This is a great opportunity to welcome those who may find those first steps a bit daunting.

So, to all the women and girls out there, young, old, any shape, any size, any background, any fitness level, we welcome you to join the parkrun family on 7th March. 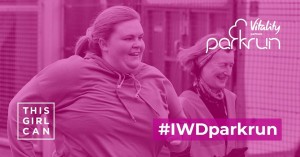 This morning Michelle Lewis, one of the core team members, appeared on the local radio BBC station to discuss parkrun and why you should join the parkrun family. 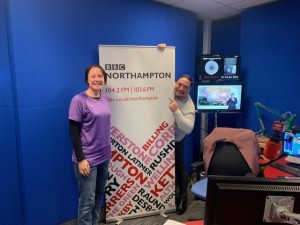 This would not have happened if our lovely parkrunner Bryan did not nominate us.  A big thank you from us all.

"Northampton parkrun is a free, timed 5k (three miles) event for anyone - walkers, joggers, runners, buggy pushers, wheelchair users etc (‘runners’). It takes place at the Racecourse every Saturday at 9 a.m. and is one of 601 parkruns in the UK that are organised by local volunteers, backed up by a centralised registration and barcode results system. Parkrun has been aptly described as “…a celebration of all that is good about social fitness”.

A team of around 30 volunteers – marshalling, organising the finish funnel, operating timers, scanning the runners’ barcodes etc – enable Northampton parkrun to take place each week. The event has supported over 100 youngsters participating in the Duke of Edinburgh’s Award programme. Members of the tail-walking group frequently double up as Racecourse litter pickers on parkrun days – and a group of parkrunners will plog and support the Friends of the Racecourse events.

The first Northampton parkrun took place in May 2012 and the most recent event, on 6th April 2019, was the 361st. The average number of runners per week over this period is 334 but, for the fourteen weeks so far in 2019, the average number of runners per week is 499. Everyone is welcome at Northampton parkrun – it prides itself on being accessible, inclusive and welcoming (it often features ‘fun’ themes). Trained guides are available for visually impaired runners and the event brings together people of different ages, who possess a range of athletic capabilities and who have varying objectives. An 86-year old regular recently completed his 350th parkrun, three generation family groups are not uncommon and an enthusiastic 4-year-old joined his mother as a marshal only last week.

Local clubs of all description have participated in, or taken over, an event to help their promotion; these include, most recently, representatives from youth rugby (Old Scouts), local employers (Opus Energy) and Abington Park Joggers. For the last Saturday of each month Northampton parkrun is a ‘5k Your Way, Move Against Cancer’ parkrun and, on 11 May, the Deaf Hub for the deaf and hard of hearing will be the main provider of volunteers.

The Chief Medical Officer for England, Dame Sally Davies, has said: “... parkrun is community led, and community facing, allowing local authorities to benefit the health of their population by simply supporting parkrun with a location and helping it to be visible …”. Locally, there have been many individual examples where runners and volunteers have derived enormous personal benefit in being part of a group - such as weight loss, helping to deal with anxiety or a diversion from life-limiting conditions.

The core team behind Northampton parkrun have supported the teams that have successfully set up new parkrun events in Kettering and, more recently, Upton. They are silent heroes in the local community – their weekly efforts, often taken for granted, enable hundreds of people to benefit physically, mentally and socially. A Heart of Community Award would demonstrate the respect and appreciation that they deserve." 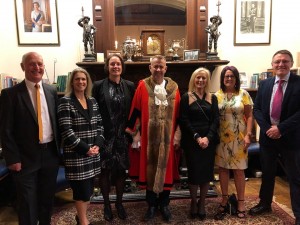 You might start to see a regular report on Northampton parkrun from various contributors from now on – but, unfortunately, our first volunteer had another more-pressing writing commitment … so, apologies, it’s me again giving you a personal viewpoint of the most recent event.

Just after 9.30 on Saturday morning, vehicles were heading towards my marshalling spot down St George’s Avenue with their headlights and windscreen wipers on – and I was clapping the final parkrun athletes wearing my gloves; you won’t need reminding, therefore, that this week’s weather was gloomy, cold, windy and damp! So, well done to every single one of you that walked, jogged, ran, pushed a contraption or led a pooch round the Racecourse for Northampton parkrun #350. Our 555 brave athletes were part of another record UK parkrun weekend with 180,746 participating – lots of new individual parkrun records, obviously, including 354 at our nearest neighbours, Sixfields Upton.

Milestones celebrated this week included Dean Shears (150) and Richard Boyes (50). Christine Ayres (VW 60-65), who is mentioned later, was running her 150th parkrun at her 36th different venue; her time of 25.37 warranted her an 80.35% on that Age Grade thingy; and she’s done her fair share of volunteering, including frequent stints as Run Director. We had even more Northampton first timers than last week (64 compared to 41) … (and 43 (last week 33) were taking part in their first-ever parkrun anywhere). A number were obviously parkrun tourists. Our Facebook page featured interviews with David and Christine Ayres (from Rushmere) and Emma and Elaine Vaughan (from Maldon Prom), all of whom were adding Northampton to their considerable lists of single-visit parkruns. Three Massey Ferguson RC runners were making their Northampton debuts, but were definitely not first-timers to parkrun - Angela McKay (her 285th), David McKay (his 284th) and Sonia Karamat (her 163rd). And Tony Cronin chose to explore the Racecourse for his 208th parkrun. Some of our regulars were competing elsewhere, too – including Mark Bonner (joining 1,294 others at Southampton – the UK’s second biggest this week, after Bushy Park), James Cushing (at Norwich),John Bates (at Gorleston), Rachel Iilsey and Rosie Clifford (Conkers).

Despite the conditions, 58 athletes sped round to achieve ‘New PB!” against their name in the results. Again, too many to name individually, but Dom Carlisle (VM45-49) followed up his 32.18 first ever parkrun last week with 25.29!!. Neil Lantsbery (four PBs in last four runs), Kate Wilde (JW 11-14) in 25.06 and Claudia Terrell (JW 10) in 26.28 are also well worthy of mention. Those I know, sort of, included Andy Goldsmith, who registered his fifth successive PB; Darren Berkshire (two PBs on the trot); Adam Wright who was 10th in 19.21 and Steve Boyce (VM 60-64) with an impressive 25.07. I couldn’t help but comment to our first finisher, Mark Hill, as he dashed by me initially, that he would be struggling for company – he eventually finished in 16.33, over a minute in front of the chasing pack. When I looked at the results, I wondered whether our first finishing female, Karen Smith (in 20.23) had travelled down to support the Cobblers’ opponents that afternoon (as the majority of her previous parkruns were at Carlisle!). At least she had her parkrun performance to cheer her up on the long journey home … (and, if she knew it, the satisfaction of finishing in front of big Cobblers fan, Mark Kennedy, co-editor of the Hotel Enders magazine (22.30) !!).

On my way to ‘that corner’ each week, I customarily exchange “Good morning” with lots of athletes, many of whom I’ve got to know, not by name, only by sight. One such example is a man I now know to be Keith Gee, who, he proudly told me, regularly finishes first in the VM 75-79 category …. because, as he amusingly also told me, as we passed each other on Saturday, he is often the only one in that age group!! (Frustratingly, Keith was two seconds slower than his PB this week). To conclude, Northampton parkrun #350 wouldn’t have happened without the 30 volunteers, under the direction of RD Szabolcs. And one of those, this week’s tail-walker, Lynette Hill-Park, will shortly be the proud possessor of a ‘Volunteer 25’ T-Shirt!

Please help spread the word: this parkrunday 20th August we are sharing the park with the team setting up for the fabulous Umbrella Fair. See: https://www.facebook.com/UmbrellaFair/?fref=ts

Their planned vehicle access will be along Leicester Street then alongside our runners to the Barrack Road entrance area where the vehicles will then be stewarded across the running route we use. This is the part of the park around the Dragon play area. We need to have runners to the left on this bit of path- this will be especially important when 2nd lappers are going round 1st lappers. We will also all need to keep an eye out for any other vehicles that enter the park by another route in error. As ever, runners and volunteers safety is the most important thing and we will appreciate everyone's vigilance and as many marshals as we can muster. Thanks Helen

(I was hoping to add a map/ image but I can't at the moment!- if you have access to our facebook site the image is on there)

One of our parkrunners approached me to let you all know about a local group that is putting on a Pancake Race on Saturday 21st February at 10 am by the basketball courts on The Racecourse. All are welcome. It is £1 to enter and I am told proceeds will go to the Shoebox appeal for Romanian Children.

Please see the below link for details of this 5k Fun Run in support of Endometriosis UK:

It is on Saturday 8th March 2014 at 2pm and is in the same park as the Brueton parkrun.