Northampton Racecourse parkrun #410 took place on 14th March 2020 … and, after 497 days - including 70 Saturdays – we returned on 24th July 2021. The results show that 348 people, ran, jogged and walked our course, of whom 33 were first timers with us (28 had never before participated in any parkrun) and 38 recorded new PBs. The event was made possible by 34 volunteers. 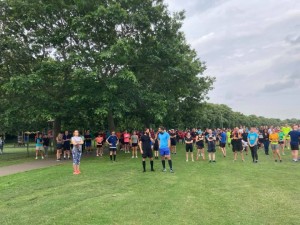 But it was much more of an occasion than those bare statistics indicate. As we all know, parkrun is not a race and it’s so much more than just a run - it’s a get-together with friends, and a like-minded community, to exercise (naturally!) but also to have (nowadays) a socially-distanced chat, a laugh and a celebration or two. No more so than this week.

Unless you’ve recently been with Jeff Bezos and Richard Branson in their supersonic rockets or totally self-isolating because of the pandemic, you can’t have avoided the numerous television, radio and social media stories featuring Bob making his much-anticipated 400th parkrun. Is there any more to say about this remarkable man than what he has already said about himself?! His running achievements are staggering (world best times, 40 miles round a track in less than 5 hours etc etc), he’s a parkrun legend and he is an inspiration to young and old alike. I’ve known him a long time; I’ve taken part in marathons etc with him and I have the utmost respect and admiration for his motivation and physical fitness. Long may he continue. 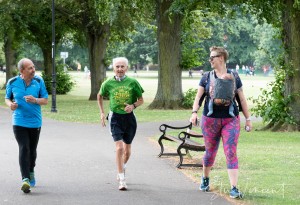 William Kneeshaw (100), Peter Diamond (50) and Bethany Quinney (50 – with a PB!) were others who’ve also been waiting to celebrate their milestones. And Julie Evans did her 200th run at Northampton (out of 213 in total). 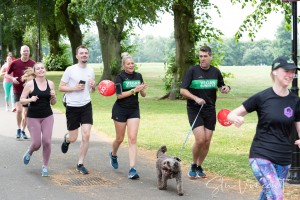 Norbert Mihalik finished first (for the seventh time) and Louise Hannan was first female (for the second time). Eighteen of the 141 females taking part clocked up PBs, including four out of the first six, and Claudia Terrell (JW10) impressively but frustratingly ran 23.39, one second outside of her PB. Kimberley Boyce notched a PB with 34.19 nearly seven years after her previous best time; Robin Bunting went round in 21.00, five minutes quicker than his last parkrun in 2019, and over three minutes faster that his last PB.

On the age grade percentage thingy, Andy Green, Chris Bell and Andy Heather all recorded over 80%.

Bob always runs in green, so honourable mentions go to Stirling Green (spot on 22- minute pacemaker) and Calvin Green (24.08 whilst steering Freddie in the pushchair). 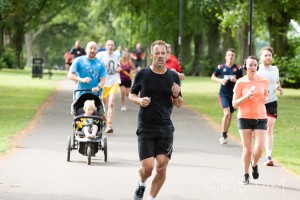 Despite some initial traumas, Alastair and the team ensured a safe, enjoyable and successful resumption of parkrun. There were a few changes – at the start and finish – but, in between, all the usual effort and determination was displayed by everyone! It’s good to be back – but please remember that we now miss two Saturdays and our next event is on 16 August. Don’t forget your barcode (and, just a reminder to Carole James – we start at 9.00 not 9.30, so don’t be late (again))! 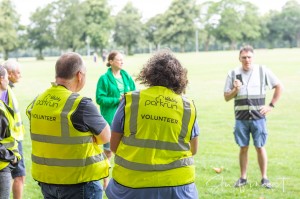 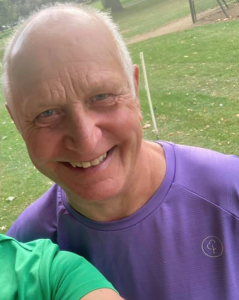 It was a super seventh year anniversary for Northampton parkrun as hundreds of hardy runners, joggers, walkers, wheelers and even Wookies turned out to take on the 5km course for the 365th time in the event's history.
Aside from the birthday bumps, the special event had its own unique theme: Star Wars vs Star Trek.

The "May the 4th Be With You" dateline had something to do with it - though the most committed Jedi's would have found the presence of Trekkies on their day about as popular as Luke Skywalker in a Mos Eisley cantina.
I did not like it either.
This was no hive of scum and villainy though... more the usual parkrun buzz of smiles and success.

The PB bell rang out with the intensity of Chewbacca losing at chess as 77 runners finished faster than the Millennium Falcon on the Kessel Run.
Those coming home in less than twelve parsecs to clock their best times included Aydan Stoddart who knocked a couple of minutes of his PB to come home in 31:28.

Andy Heather was once more the fastest in the galaxy as he led the runners in, while Kate Bond (Daventry Road Runners) was first female in 22:49.
There was an amazing run from young Nathan Lamb (JM11-14) - the force is strong in this one - who finished ninth in 19:20.

As one wise Jedi once said: "Ready are you? What know you of ready. For 800 years have I trained Jedi. A Jedi must have the deepest commitment."
Master Yoda would certainly be impressed with the dedication of some of our parkrun fraternity.
Paul Eccles braved winds colder than Hoth to complete his 100th parkrun, Sue Bayliss hit number 50 and Jon Fitzhugh completed an incredible 300th.
Andrew Howard of East London Runners may have been enjoying his first outing at the Racecourse, but it was his 376th parkrun in all.
Just as we remember all the Red Leaders standing by as Luke raced towards the Death Star, no-one should forget the 54 volunteers without whom the Dark Side would definitely have won.
This week they included pacer Karen Clark, who finished seconds under her target of 40 minutes - the first time she's broken that barrier in 2019. 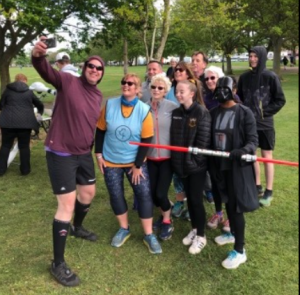 (Karen with many of the #fitfam)

Finally talking of milestones, we all wish Lucy Barker happy birthday and, naturally, 'Live Long and Prosper' (that's the one Star Trek reference you're getting out of me).

May the force be with you. Always.