It was beginning to look a lot like Christmas as a host of Santas, Elves and various festive accoutrements descended on Northampton's Racecourse.
The occasion? Parkrun number 397.  So strong was the Yuletide fever, run director Anna of Arendelle, aka Michelle Lewis, would surely have had all 472 park runners building a snowman... if it wasn't for the fact it had not stopped raining all week.  As it was, those arriving at a boggy course were simply grateful the really wet stuff was not falling from the sky for a few hours.  A Christmas miracle, you might say. 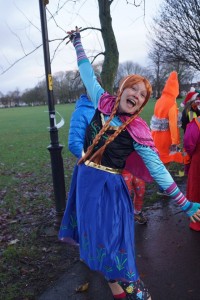 Fruit toast and hot coffee. Bacon butties and steaming tea.
Cold Christmas runners warmed by the glow of much welcomed hot food.
If pre-9am is the Night Before Christmas of the parkrun world, the time spent in the Good Loaf is akin to the day itself.  Results arrive powered by email updates with every bit as much magic as Santa travels down chimneys on Christmas Eve.  As fresh as the Good Loaf bread, this week's results revealed Higham Harriers' Nathan Jones had galloped home, reindeer like, in first place in a personal best time of exactly 17 minutes. 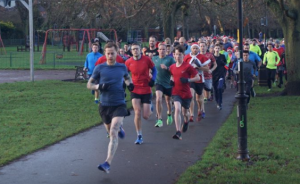 He was one of 46 sprinters, runners, joggers and walkers who beat the cold to finish in well-earned PB times.  Some more festive magic. You might say.
There was a sign of good things to come at the start of the run.
Well, several signs in fact.  Many of them coming from the hands of Alexi, as parkrunners learned how to say Merry Christmas using sign language.  Several hearing assisted runners took to the course today - yet another sign of the incredible inclusivity which this weekly battle against our legs inspires.  If that doesn't make you believe, I don't know what will? 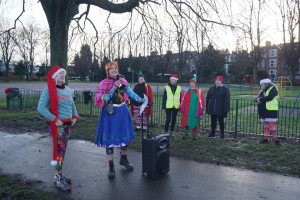 The end of the parkrun.
For some, it means a sub-20 finish. For others a 40 minute PB.
There are those who sprint home; mums and dads who push young children in front and over the line; and dogs romping over the line, dragging tired owners behind them.
The tail walkers - their usual beautiful plumage sadly lacking after a washing machine led error that will never be mentioned again - keep them all in check; a fabulous full-stop to the full range of parkrun participants.  Today, though, was the day of the ploggers.
And a special one too. The Ilsley's taking on that mantle and on the occasion of much familiar achievement.  Rachel's 100th run, and half centuries for both Andrew and young Samwise.  Some show a clean pair of heels, others create a clean park.
I told you there's magic about, didn't I? 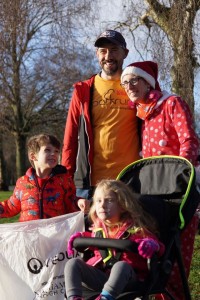 A load of bollards.
Surely not the way to talk about the noble art of volunteering?
Unless, of course, you're young Alfie and mum, Elaine. Is there a more vital role than 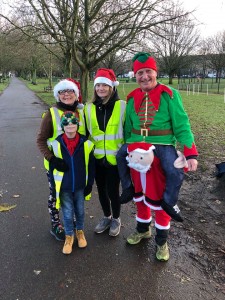 making sure parkrunners don't come a cropper on the concrete?
Perhaps the timers could stake a claim? Catherine Hickford and Cheryl Collin dutifully clicking their way through the cold, from one all the way to 472. 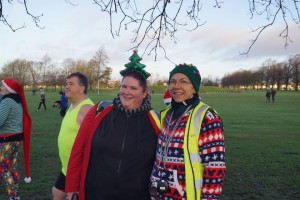 Or Leigh in her regular scanning position? Or Bryan on his corner? Or Andrew Warriner, blow-up Santa and photographer in one, capturing each moment for posterity?
Or indeed any of the selfish souls giving up their morning to make the parkrun magic start to sizzle.  And knitting it all ever, Anna of Arendelle... has she built that snowman yet?
It's beginning to look a lot like Christmas, don't you think?
Full list of volunteers: 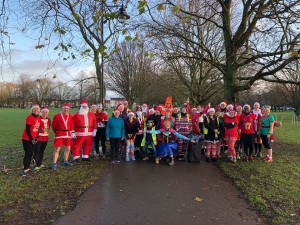