Lots of dedicated athletes took part in a marvellous running event at the weekend – some were doing it for the first time, some achieved their goals, some struggled but still reached the finish line, some even did it wearing fancy dress … but, I suspect, every single one of them enjoyed taking part. I think that’s a fair description of Northampton parkrun … but I should probably also mention that a few Racecourse regulars were mollycoddled with chip timing, water stations, bands, cheering crowds and a medal at Sunday’s London Marathon (including Harriet (Hattie) Rapley, Steve Cory, Mick Conroy, Andy Lack and Gerald Billis).

The bare facts are that 41 volunteers (including some Marathoners) enabled Northampton parkrun #364 to happen on 27th April 2019. 479 people walked, jogged or ran it; 42 were first timers at this venue (of which 24 had never before done a parkrun, or at least never had it recorded!); and 60 people achieved a PB. But, perhaps more significantly, those statistics do not convey the fact that the event was our inaugural ‘5k Your Way, Move Against Cancer parkrun’ (this is described as “A community-based initiative to encourage those living with and beyond cancer, families, friends and those working in cancer services to walk, jog, run, cheer or volunteer at a local 5k Your Way parkrun event on the last Saturday of every month”). And we were also joined by members of Breast Friends Northampton - a support group for people, men and women, affected by breast cancer. 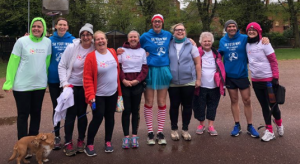 Our first-time visitors included David and Matthew Wilkinson (Halesowen A and CC), who normally turn out at Cannon Hill parkrun, Birmingham. Matthew, although only (JW 15-17), was doing his 130th parkrun (Charlie Conroy, from Parklands Jog and Run, has already done 133 in the (JW11-14) category). Shrewsbury Road Runners James Barber (with 412) and Lynne Barber (with 331), both in the (55-59) age category, and Simon Hanson from Redditch Stars (with 177) are obviously parkrun tourists – each visiting us for the first time. Kevin Church (Marshall Milton Keynes AC) ran his 393rd parkrun, three less than Hazel Church (Redway Runners) … in context, Bob did his 354th. Turning to more competitive aspects, the ultra-consistent Andy Heather was first finisher in 17.40 and he was the only person to achieve an Age Grade thingy of over 80% (80.28%). Catherine Mackintosh was first female – as with her first parkrun (at Sixfields Upton), she finished in 22.30. There were, as always, some outstanding PBs throughout the field and, as always, too many to quote – from Crystal Steele in 446th place (nearly 4 minutes faster than her first parkrun) up to second placed Sam Tallett (with 18.25). Youngsters who particularly excelled included Sean Nikel (JM10) with 26.49, Hazel Dalley (JW11-14) with 25.11 and Morwena Hills (JW 11-14) with 26.52. Ashleigh Burdett (JW10) helped milestoner uncle Jonathan round in a PB of 37.47 - for her. I’m not sure if they’re related but … Johnny Duffy (JM11-14) with 21.34 (from 23.21), Noel Duffy (JM11-14) 23.44 (from 24.48) and Jemima Duffy (JW15-17) with 32.46, all had ‘New PB!’ against their names in the results. Dale Holmes’ 10 parkruns have all been in 2019 – he has improved on his previous best every run and is now down to 31.55 (from 42.16). The inspirational Catherine Hickford was the Northamptonshire Sport Get Active award winner in 2018. Her citation included: “Catherine started parkrun in 2014. At first she could not run and would be the first to admit she was really unfit and unhealthy”. On Saturday she (again) reduced her PB – this time, from 38.38 to 37.47. 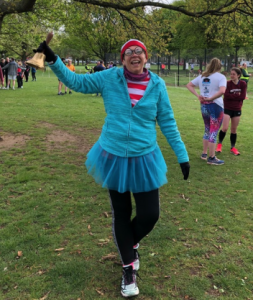 At last, we come to the milestone category. Ethan Compton (JM11-14) and Lily Bodkin (JW11-14) qualified for their ‘10’ T-shirts; Jason Carter, Lee McBride, Juliet Savil and Jonathan Burdett each ran their 50th parkrun; Tony Noton completed his 100th and Emma Robinson did her 250th (unsurprisingly running round with Zoe White, who did her 250th last week). And, although she tried to keep it a secret, our effervescent Run Director, ‘Communications Person’, marathoner, charity fundraiser etc etc - Michelle Lewis – volunteered for the 175th time (and ran her 100th parkrun in a Where’s Wally outfit … with some of her mates also ‘persuaded’ to do the same). Just joking, Michelle – congratulations; we all think you’re amazing! I was honoured to accompany Michelle on her centenary run (Peter Dixon drawing the short straw for marshalling ‘that corner’) and I was pleased to be notified that I was second in my age group category … until I saw that the first (VM70-74) was John Bates, who was dog-assisted!! 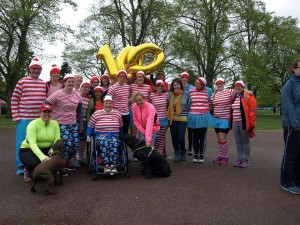 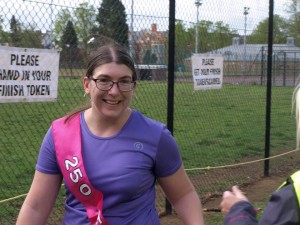 Back to my normal position next Saturday – remember it’s another dress up opportunity; May the 4th be with you. And if you haven’t done so recently - or ever – volunteer you must … 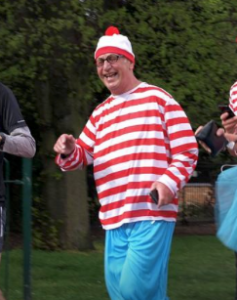