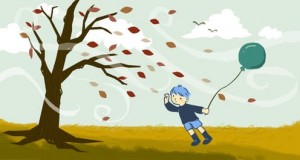 It is 8.30 am. It is 8 degrees and a Force 8 West South West gale is blowing. As the inky blackness of the night sky changes gradually into murky blue and dawn starts to break over Edge Hill, Margaret Ellams and her trusty band of volunteers prepare for another onslaught of individuals coming from far and wide with a common aim - to complete the Ormskirk Parkrun.

To anyone attending their first Parkrun it may feel a little daunting - it takes courage to turn up to any event of any sort on your own, but the truth is, that’s the hardest part (oh, and the run!) However, the newcomer will soon feel part of the worldwide Parkrun family - and what a big family! Last week in the UK there were 683 Parkruns, 195,759 Parkrunners and 15,830 volunteers, whilst worldwide there were 1,671 Parkruns plus 321 junior Parkruns, and the worldwide Parkrun population was 357,004 Parkrunners and 33,098 volunteers. 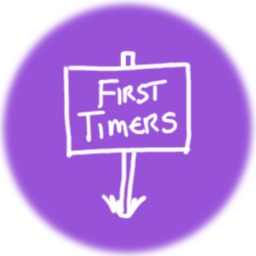 Parkrun has become so popular it really should be in the dictionary, or at least, not receive a red underline as I type it!

The reasons why people complete a Parkrun have been well documented. For many, it’s a weekly bit of exercise, for others - to obtain a PB, but for many, it’s just a way of meeting people whilst actually doing something on a Saturday morning. Whatever the reason, the feeling by 10.00 am of having achieved something makes the rest of the weekend feel that much better.

For that first timer I mentioned, I hope you enjoyed your first excursion into the Parkrun family and it will be the start of something life changing - as it has been for many of us. To be part of something bigger rather than being isolated and alone is, surely, more beneficial to all.

Today’s Run Director, as mentioned, was the ever charming Margaret Ellams, who welcomed all to today’s run. She pointed out it was 56 years ago today since The Beatles had their first No 1 hit in America (how does she know this?) with “I Wanna Hold Your Hand” which became their biggest record in the States selling 12 million copies. As a result, Margaret asked everyone to shake hands with all around us. So, with Bon Ami & new ‘phone numbers (perhaps some took it a bit far!) Margaret sent us to the Start. 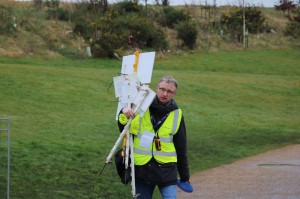 She was ably assisted by a great band of volunteers, (see below for their names). DO join them for one week at least and put something back into the event - it’s much more fun than running. It cannot be overstated Parkrun could not happen without these people so if you have a hangover, or you have a niggling injury, or just fancy having a natter and some laughs rather than doing that boring running stuff, DO give it a go….please!

This week 339 people ran, jogged and walked the course, of whom 56 were first timers and 50 recorded new Personal Bests. Representatives of 24 different clubs took part.

First to finish today was Thomas Fair in 18.44 and first female was Laura Havis in 20.20. Congratulations to both - and to the other 337 for running, jogging, walking or pushing a buggy in very windy conditions. Full details of all who finished with their Age Group and Percentage Figures are all on the Ormskirk Parkrun website. 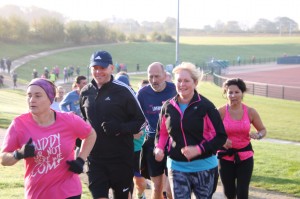 The event was made possible by the following amazing 27 volunteers: 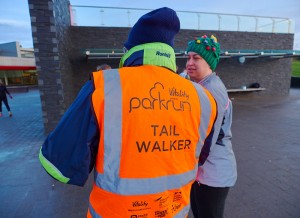