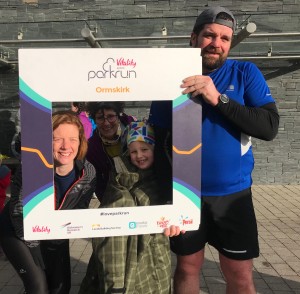 On the eve of Mad Dog (10k) 2020, Ormskirk parkrun was bursting with volunteers, some of whom were saving their legs for tomorrow’s race. It didn’t deter 353 people from turning up to run, jog or walk the course set in the grounds of Edge Hill university, of whom 53 were first timers and 66 recorded new Personal Bests. Representatives of 16 different clubs took part.
Having lived and attended school in Ormskirk for some of my childhood, it seemed a good venue to tour to, from our home run Cuerden Valley parkrun. Four of the group collected an “O” for the alphabet challenge, taking part in the 2 lap course which starts and finishes on the athletic track and takes in the scenic paths on the university’s grounds and past the duck pond. Two of us were on marshal and hi- five duty while the final tourist (at just 6 weeks old!) slept soundly in her pram.
The weather conditions were perfect, storm Ciara not yet arriving in Ormskirk, with sunshine and clear skies, and just a gentle breeze. Run director Jo finished the briefing with a song, joined by her band of hi-viz heroes, “Smile” by Nat King Cole, with a message to smile, and enjoy parkrun. Which the volunteers and parkrunners alike clearly did!
At the end of the event, participants were offered fudge to reward their efforts, which went down very well! All in all, a great way to start a Saturday morning- and the perfect start for two of our group who ran 17 miles home after the parkrun, as part of their marathon training. Ormskirk parkrun, you’ve been brilliant and we will return!
The event was made possible by 29 volunteers:Karen HULME • Barry JONES • Phil HOGAN • Joel HANLON • Andrew YUZGIN • Margaret ELLAMS • Val PARRY • Peter RENNER • Katy CLEECE • Jo ROTHERAM • Rachael FRACKELTON • Carol TIDGWELL • Andrea CONCANNON • Graham CONCANNON • Bernice BLUNDELL • Mark BLUNDELL • Valerie DENIEUL • Sue MCMASTER • Timothy BAILEY • Margaret JONES • Grant THAIN • Erin THAIN • Jack CLEECE • Kirsty SOLE • Thomas LUNN • Benjamin LEITCH • Daniel HASTINGS • Oliver FEARNS • Natasha HASTINGS 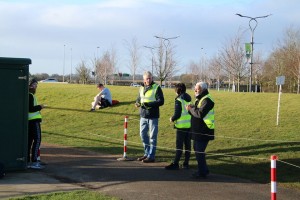 Today's full results and a complete event history can be found on the Ormskirk parkrun Results Page.