Bright sunshine beckoned Orpington's largest field of parkrunners this year and we were able to celebrate Richard Hawkes' 250th parkrun... Richard and his son regularly run and volunteer at Orpington parkrun. Many congratulations to him... We understand that Thomas who is a junior parkrunner is following close behind so we look forward to him achieving 250 runs soon!

Today is also 24 hours before the London Marathon and many of our running community are taking part, either as volunteers or athletes... Good luck to everyone tomorrow...

This week 221 people ran, jogged and walked the course, of whom 13 were first timers and 36 recorded new Personal Bests. Representatives of 18 different clubs took part.

The event was made possible by 11 volunteers:

Today's full results and a complete event history can be found on the Orpington parkrun Results Page.

Orpington basked in unexpectedly good weather on Saturday 3rd June 2016. Despite the storm the previous evening, the course was clear and dry, and 177 runners enjoyed the opportunity to try and better their previous best. Being fairly new to parkrun, I was left slightly in awe of Sally MUSSON, as I’m sure most of you were. More about her later…

We would like to offer a particularly warm welcome to the 19 first timers who joined us on Saturday. We are certain that we will see you again, if not next week, then as soon as possible. We were also very happy to host representatives from 13 different clubs, and want to extend warm congratulations to the 32 parkmates who recorded personal bests on the day.

The cake was supplied by Henry AMBROSE, who ran his 100th parkrun - congratulations on your milestone Henry and welcome to the 100 Club! 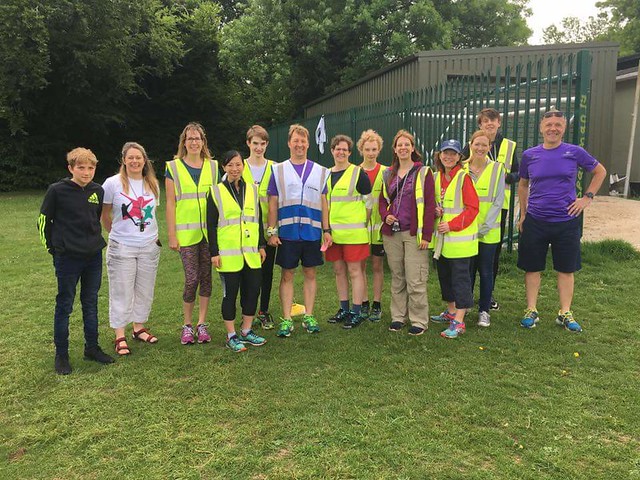 We know that you are all dying to read THE STATISTICS, so here they are:
[This way lies awesomeness... --and that's not a reference to Disraeli!]

Male placings:
Chris BLACKBURN (VM40-44) (Unattached) was first over the line in 17:24. This is the 5th time in 16 appearances.
Benjamin GARDINER (JM11-14) of Blackheath and Bromley Harriers AC was second over the line in 18:08. He had been first to finish once before.
Pierre LEROYERE(SM20-24) (Unattached) was third in a time of 18:50. He has also finished first once before.

Today was the first Junior Takeover at Orpington parkrun. The youngsters did an amazing job running the whole event on this lovely Spring morning.

Setting up and barcode scanning were April and India Davis.

Jack and Nancy McLeod were giving out finish tokens.

Thank you to the adults that also helped including Andrew Gebbett on washing-up duty; parkrun would not be possible without the volunteers and your help is always appreciated.

At last it wasn't FREEZING COLD!! And with that it was a bit muddier than it has been. Thanks again to the volunteers who did a great job.

There was a problem with one of the scanners this morning, apologies if you were missed off, please contact me via the website and I'll add you on - if you could remember to let me have your parkrun number that would be excellent.

If your house keys fell out in the blue bucket I have them!

If you finished 119 and 120 this week, please bring your finish tokens back next week.

Remember to let us know via the website if you want to volunteer in the near future.

The first run in our second year saw 107 runners taking part.Twenty six P.B.s this week.Fastest time was 18 minutes 16 seconds and 48 minutes the slowest..Good to see so many youngsters taking part, we seem to be attracting a number of families each week.

long may the kind weather continue!

In short, let us know at orpingtonoffice@parkrun.com if you have any ideas of how to mark the occasion and whether you would like to help.

Today there were 84 runners who started to run in the sunshine and finished in the sunshine. Thank you to all the volunteers especially those who tidied up the course when it was pouring with rain.

From a personal point of view I would like to thank you all for being part of this event. It’s been a pleasure to have been part of it for its first year. I hope next year will continue with more successful events and that we will see many more new faces….and a new pavilion perhaps? I think unless someone works very quickly then the estimate of it being done by the end of September will come and go. Still, we are very grateful for the use of the building and especially the electricity to power our urns.

Today we welcomed 14 first timers to Orpington parkrun. Among those were Darrell SMITH who won in a time of 17:26 which is the third fastest male winning time set at Orpington, well done. He pulled away from the talented youngster Jake POTTER after a lap but Jake still beat all the other adults by taking 1 min and 18 seconds off his previous best time to finish in 18:26. The first lady in was Sarah RATCLIFFE in 22:21.

Another first timer was George BUCKINGHAM who ran round with his dad Justin BUCKINGHAM to do an impressive first time of 35:46. Give him a few months and he’ll be after his speedy mum Harriet BUCKINGHAM who was volunteering as one of our timers today. This is what parkrun is all about… parks, running, fun, family, community and helping.

Someone who has run before was Elizabeth BURTONSHAW who completed her 10th parkrun today running 43 seconds faster with a time of 30:39. As a junior she will be the proud owner of a white parkrun 10 tshirt in a few weeks’ time. Well done to you Elizabeth. As a reward she was presented with a 10th parkrun cake to mark her achievement.

A massive thank you to our volunteers again today especially Harriet BUCKINGHAM and Sara GEORGIADIS who had a go at being Timekeepers for the first time. Helen GILBERT also excelled herself by collecting up what looked like most of the signs and cones from the park …whilst having her son Henry on her back, literally! I saw her struggling towards the pavilion with it all and did I rush to take things from her? Nope, I grabbed my camera and took a picture!

Please do offer to help especially if you haven't done so before...there are lots of spaces in the team for next week, hint hint

Thank you Thomas for letting us know it was Dad's birthday and allowing us to embarrass him by singing Happy Birthday on the start line.  Perhaps it was this that inspired nearly half of the 80 strong field to achieve a Personal Best time.

Regular front runners Gavin Kitchingham and Simon Collins raced in 1st and 2nd with PBs followed, by first timer Paul Young who was just a second ahead of Joe Camacho who also achieved a PB.

Ali Amanat and Ross Dixey chased each other around the course to achieve their goal of running under 25 minutes in accordance with Ali's 8 week schedule.  Zoe Wright was another who achieved a PB finishing in under 29 minutes - a fantastic improvement from her 45 minute walk just 8 weeks ago.

John Sandford-Mills and Harry Keene are now proud owners of "50" T Shirts shortly to be joined by Nigel Webb who completed his 50th today.  In recognition of this and his regular donation of a super bread pudding each week he was presented with a specially baked "50" bread pudding that was enjoyed by many.

Chris Dickinson also achieved a PB, one of our great volunteers today who not only helped set up the course but briefed the first timers too.  Thank you to all who helped today and if YOU can help out in the future please take a look at the future roster on the volunteer page and drop us an e-mail.  Look forward to seeing you all soon.

The beautiful spring weather attracted 63 runners, including 10 first timers, to Goddington park for this week's run. After a quick run briefing where Noah Patterson was presented with his 10 t-shirt - congratulations Noah! - the runners were off to enjoy the much less muddy than usual course.

The improved conditions showed and an impressive 31 runners achieved a PB - so a very well done to you all!

First home in 19:20min was Steve Taylor, then after a sprint to the finish line Neil Ayrton just pipped Ross Gentry to the post to cross second in 20:01min, with Ross coming in 2 seconds later. The first lady home was Natalie Glover in 21:25min, then Helen Gilbert and Melanie Ward both got PBs as they finished second and third ladies, respectively.

A big thanks as always to all this week's volunteers and see you all soon!
Zoe

The sun decided to come out and shine upon the 36 intrepid runners that completed the course today. It would have been 37 but Joe ROBJOHNS pulled out after one lap wanting to make sure that he didn’t pull anything before he completes the London Marathon next week. We wish everyone taking part in London the very best for the day. We were joined by Aiguo DING who was visiting from Nonsuch parkrun and came in 7th place in 25:44. Hope you enjoyed the event Ding.

The race was won by Simon COLLINS wearing the charity vest he will be running the London Marathon in next weekend. Again, best of luck to you Simon for that.

Only 3 PBs today. The first came from Mark BURROUGHS in 6th place shaving 7 seconds of his previous best time. In 27th was Chris RASTEIRO in 31:33 taking 10 seconds off. In 34th was Michelle MORRIS  in 36:29 taking an amazing 2 minute 28 seconds off, well done Michelle.

The sensational finish of the day had to be the tussle between Barnaby CARN and Peter MAGEE. Barnaby took the aggressive line of forcing Peter off line to prevent him overtaking before the end and succeeded in keeping him behind…what a future star he is. They were so close at the end that when Barnaby fell over the line Peter had to jump over him and they both lay exhausted on the floor! Great stuff guys.

Your Run Director for this week (and Event Director, so contact me if you have any questions about the event in general)