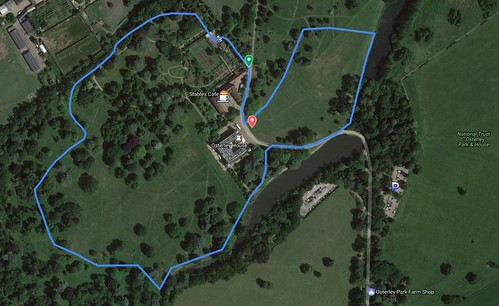 The call of the Osterley social media sirens attracted an impressive 169 runners from lands as far flung as Gunnersbury, Ealing and even Bournemouth for the official unveiling of the new temporary parkrun route this week. This was a record number of runners outside of the first ever edition (261) which remains the overall record, and the annual Hounslow mini-marathon trials. So thanks to everyone for coming along – hopefully we’ll see you all back again soon.

The number of volunteers – 16 beautiful pillars of society on this occasion – was also a record. Amidst them was Clare Everard who volunteered for her 100th time – an amazing achievement. We look forward to seeing her reach her 100th run as well in the months to come. It was also great to see one of the founding members of Osterley parkrun Leah Hillman back running with us – for only the second time since the end of 2013. We hope she’s proud of how it’s developed in her absence. See you soon, Leah!

The men’s category saw a closely fought contest between West4 teammates, Charles Waters and Martin White, with the former just edging ahead to finish first by 5 seconds in 18.23. Graham Sutherland breasted the (metaphorical) tape in 3rd place in 18.45. The best age grade rating of the day went to M55-59 Gary Rushmer for his impressive 4th place in 20.01. His score of 76.77% was a hair’s breadth ahead of VW55-59 Louise Hutchinson who finished 8th female and 42nd overall in 23.58. 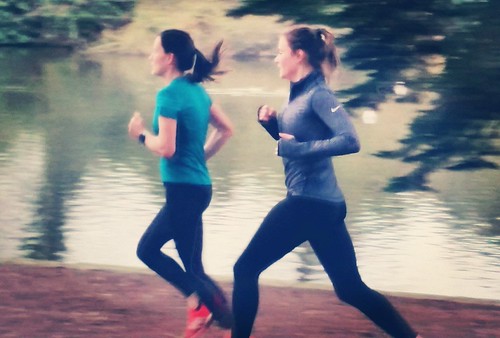 Louise’s time would have seen her finish first woman on many occasions, but parkrun #178 saw easily the highest quality women’s field in Osterley history. Seasoned Osterley parkrun watchers drooled at the mouthwatering prospect of the head to head between two Osterley legends, 13 time first placer Dorota Rakowicz and 21 time first placer Rachael Turner. Throw in the talented Brownlee sisters of West 4 Harriers, Eloise and Lydia O’Donoghue (pictured above), and you had a 4 way tussle that will live long in the memory.

In the end, experience won out with Rakowicz clocking up first place no.14 in an excellent 20.08, 9 seconds ahead of Turner. The O’Donoghue sisters were a short distance back, both taking pbs with 20.31 and 20.32. Rakowicz is training hard for her London Marathon debut this year (good luck, Dorota!), so has a lot of miles in her legs, but as she told parkrun news, “I’m a fighter”.

Congratulations to everyone who came along and thanks to all the kind comments about our new course. We really like it too! We owe a big thank you to head gardener Andy, plus of course Osterley GM Neil Cole, and Osterley Sports development officer Ed Hewison, both parkrun regulars, for helping us make it happen.

We look forward to seeing you all next week – as long as you don’t get heat stroke from the Caribbean weather forecast for this week, of course.

This week there were 169 runners, of whom 27 were first timers and 26 recorded new Personal Bests. Representatives of 18 different athletics clubs took part.

Osterley parkrun started on 31st August 2013, and since then 3,084 different runners, including participants from 247 athletics clubs, have completed 15,507 runs covering a total distance of 77,535 km, and there have been 2,893 new Personal Bests.

Today's full results and a complete event history can be found on the Osterley parkrun Results page: http://www.parkrun.org.uk/osterley/results/latestresults/