This week's report comes is by parkrun tourist Nathann. 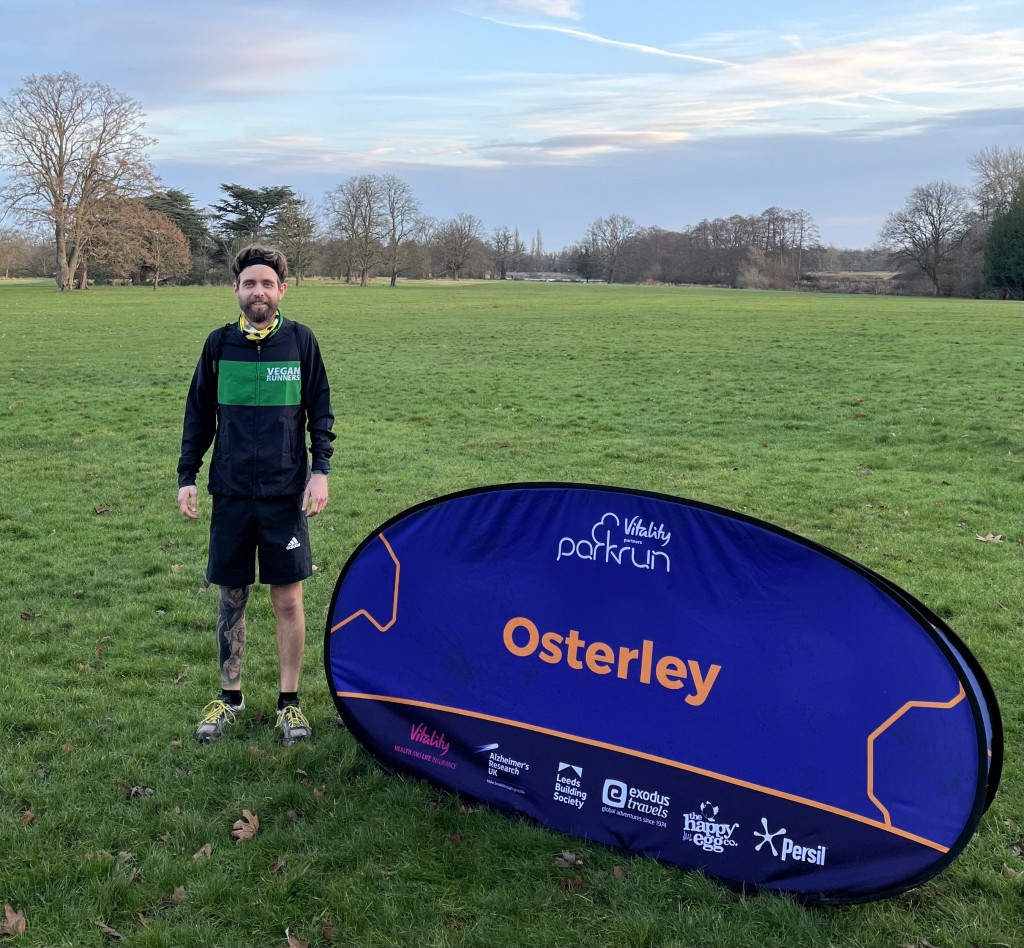 Happy New Year to everyone.

As I’m sure everyone knows there wasn’t a chance to run at one parkrun event on the first day of last year, let alone the two we could attend in the year previous. Instead I started my London to Brighton training with a 20km walk. I still remember it now because it was cold, very cold. Actually it was freezing. Fast forward a year and wow what a difference. It could definitely have been mistaken for an early spring morning. Is climate change (us) to blame for this? Almost certainly. I felt bad for driving up from Southampton in a car that really isn’t very economical. I do try to get to parkrun events by train where possible but being New Year’s Day it wasn’t that easy unfortunately. Other than the occasional long drive on a Saturday morning I try to live a sustainable lifestyle and do my bit in looking after this planet of ours. But whichever way we arrive at a parkrun event we’re all out exercising and that has to be a good thing right? For many it’s a physical thing and for me that is a bonus for sure. But the mental side of completing a run by 9.30 on a Saturday morning… well I can’t put into words what it means to me. But this is a written report so here’s some stuff I can put in to words……

I arrived nice and early at Osterley just as I always try to do at every parkrun on a Saturday. Nothing worse than rushing to an event and starting not fully ready or warmed up. Avoiding geese on the drive towards the car park was a new one though, but what a lovely welcome. I changed my footwear and had a little wander past the lake and met some of the volunteer team. A quick photo next to the Osterley sign before checking in ready to barcode scan once I’d finished my run. Plenty of time to use the facilities…. Pizza with lots of chilli oil probably wasn’t the best meal to consume in the evening before but hey you don’t really need to know any of this.

Still some time before the start so I had a little jog around and then made my way to the first timers briefing. Jacket fully off by this point, it really was quite warm. Great job by the chap speaking to a very large number of first timers. Briefing listened to and it was then time for the main briefing. I do love a briefing with a microphone! Everyone seemed to be in good spirits and if anyone was nursing a hangover from the night before they certainly hid it well!

We were then sent on our way. I hope the photographer wasn’t flattened. Very brave place to stand with over 400 keen parkrunners staring down the face of your camera lens.

It was a fairly speedy start and the first little turns were negotiated fairly comfortably despite the large numbers. Running down the first long straight enabled me to find a suitable pace and let the front runners carry on about their business. I did my best not to chuckle with a runner next to me when a poor lady nearly had her arm torn off when her dog decided with no warning that it needed to relieve itself. I’m sure it’s lovely running with your pet but that has to be the downside to it surely?

The sun was fully shining upon us now and after the tiny little trail part of the course it was around the lake to pass the house and the finish area to start the second lap. I did notice the photographer as I passed. My concerns for her looking something like a pancake where unfounded. Phew. I did have a watch on this morning which isn’t something I usually do but I knew my exact time anyway as one of the timekeepers was reading out the times as we passed, nice touch. Two laps of the exact same loop so I knew I had exactly 2.5km to go. To some that may have been a daunting prospect and I fully understand that. I decided to take the positives from it. So the first step past the start/finish and I knew I had less than halfway to go. If I completed the second lap in the same time as the first then a PB was achievable with a sprint finish. I decided very early on that I wasn’t prepared to push myself and risk injury on this occasion so continued at a comfortable pace and enjoyed the surroundings. I even heard birds singing away despite the M4 being just the other side of some hedges. Halfway through this lap and I passed the tail walker, let’s take a moment to appreciate what they do by the way. It’s not a role I’ve volunteered for in that past I must admit but I will be taking on that job at junior parkrun next weekend.

The last parts of the course were fast approaching (although not as fast approaching as the first lap). I kept checking my watch, a terrible habit and the reason I don’t usually wear one. Around the lake section a few runners upped their pace and they gave me the motivation to do the same. I just about had enough in the legs to shave a few seconds off what my finish time would have been otherwise. I even got a ‘good job’ by someone who just couldn’t quite catch me. I made sure I gave a ‘great sprint’ to someone who passed me at an impressive speed. As we all know it’s a run/walk not a race but there’s nothing wrong with having a little fun whilst pushing yourself. It’s all in very good jest.

So that was my run complete. I received my token and just about gave a thank you whilst trying to catch my breath. I made my way to where I had plonked my bag to pick up my phone and slip on a hi-viz and took up my position to start scanning barcodes and tokens. I’m glad I volunteered to do this today as there was such a good turnout and a great opportunity to help out as well as wishing everyone a happy new and congratulating them on completing their first parkrun of 2022. ‘Until next year’ someone said. ‘See you next week’ I replied. I didn’t get a response! The finishers kept coming and it didn’t take long for my phone to register that between us we’d scanned over 400 people. Apparently there was a nearby parkrun not operating today but even so, a superb turnout. I’ve never had a bad time barcode scanning in the past and of course today I didn’t either. It felt extra special though as every single person I scanned gave me such a nice smile and thanked me for my efforts. This definitely gave me a huge buzz before the drive down the M3.

Osterley had a lot to live up to today. My two most previous runs were Dinton Pastures near Reading and Upton House near Poole. Both wonderful country park locations. But let’s be honest there wasn’t anything to worry about being a National Trust site. I’m so glad I chose this parkrun as my first one of the year. Only downside is that maybe I’ve peaked on the location front a little too early on…. We’ll see what the year brings.

Thanks for having me.
Nathann Thornton
Vegan Runners