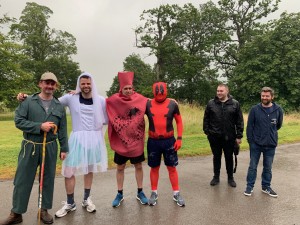 Despite it being a bit of a drizzly day, we were delighted that 159 people ran, jogged and walked our penrhyn course.  We welcomed 34  first timers and 17 people recorded new Personal Bests - well done!  Gwych! . Representatives of 18 different clubs took part including a number of runners from Penyffordd Running Club. It was a pleasure to meet Rose, who marshalled as a tourist volunteer.  It was lovely to also meet tourists from Cardiff, Leeds and Suffolk ( or was it Sussex?  I know it was down south and started with an S!!) so thank you for choosing our parkrun during your holiday and we hope you enjoy the rest of your stay in the area.

Congratulations also to Tom, who looked very fetching in his wedding dress, with his 'maids of honour' sporting a spiderman outfit and  a delightful whoopee cushion ensemble.  Tom was celebrating his stag do and ran the whole course - sadly scary spice, Harry Potter, and cave man were too hungover to complete the course and were last seen crawling to the cafe pleading for coffee.........  All the best for your nuptials in September Tom!

The event was made possible by 21 marvellous volunteers - thank you so much for giving up your Saturday morning to make parkrun happen:

Today's full results and a complete event history can be found on the Penrhyn parkrun Results Page.