A round of applause rippled through the crowd for this milestone on Saturday! 69 runners gathered on this dry but still chilly morning. Despite the chill, Spring has definitely sprungen. There were lots of gorgeous hosts of golden daffodils throughout the park. 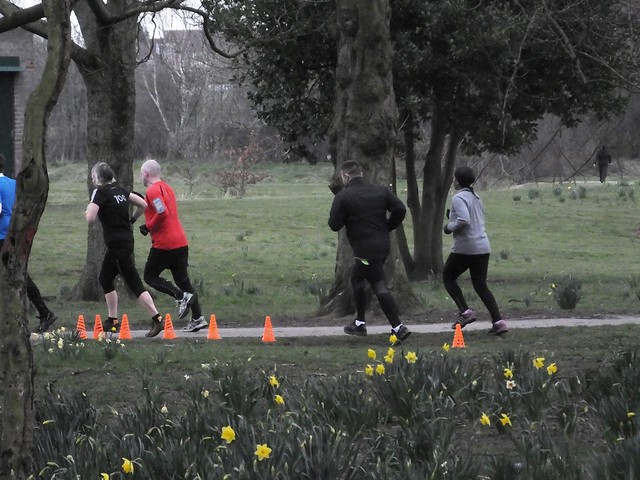 The course was not as muddy as last week but still a little spongey on patches of the grass. There was a bit of a wind factor going on though and it never feels like it is blowing in your favour does it?

Of the 69 runners, 13 were first timers and we really hoped they enjoyed running Perry Hall for the first time and we would love to see them back. Despite the gusts of wind there were 31 personal bests achieved! That really is amazing! Well done to everyone who got a new PB. Maybe the wind was helpful? There were also representatives from 12 different running clubs which again is another pleasing statistic.

First across the line was Reis Brooke with a brilliant time of 17.08 making him our second fastest finisher to date!

First female was Remi Flavell with a time of 19.17 which makes her our fastest female finisher to date!!!!! Well done to both of you.

All in all it was a really great event so thank you to all the volunteers who allowed it to take place and to all the runners.

We have mentioned on here a local running group called the Boathouse Runners based in Handsworth Park who do come and run with us sometimes and also share our Facebook posts. They are involved in the Pete Hayes Handsworth 10k. It was first held on 14th September 2014 and it was a great success last year raising over £8000 for the British Heart Foundation.

It has just been announced that it is taking place again this year on Sunday 13th September 2015. If you want any more information and would be interested in entering please click this link.

It would be great to see some Perry Hall parkrunners there.

A local running Group that cater for all abilities including beginners take's place at Handsworth park on Sunday's at 8am and 10am. Anyone interested can have a look at their page http://handsworthpark10k.weebly.com/training-and-preparation--boathouse-runners.html

A extract from their page

We are working closely with Active Parks throughParkLives and Run England to provide support to get the local community healthy and active. We have a running group called The Boathouse Runners which meets at 8.30am and 10am on Sundays in Handsworth Park, which is led by our UK Athletics Run Leaders Tonia Clark, John Clinton and Tony Hayes. We meet by the Boathouse, located by the Hamstead Road entrance to the park. Details are below. If you would like more information you can sign up for our fortnightly email newsletter below or you can email peteyhworth10k@outlook.com. If you want to join us for the first time, it will help speed things up if you couldprint this form to fill in and bring along with you. Don't worry if you can't, we always have copies and the first time you come will be the only time you have to fill anything out.The running group is free and open to all. If you have not run before it is the ideal way to get started. Our supportive Run Leaders will give you the advice and support to ensure you run to enjoy it and get fit. The motto is: if it hurts, you're not doing it right, and we can help. We aim to make running an enjoyable and social way to improve your fitness, health and wellbeing.