Following a few recent complaints of residents being blocked in, we'd like to reach out to participants about parking at Perth parkrun.

We know many of you prefer to park in the streets close to the start on the north inch and we'd like to ask you to be respectful of the residents who stay there and avoid blocking driveways.

We've had a couple of incidents in recent weeks where residents have complained to us and also to Perth and Kinross Council.

We'd like to ask participants to leave home in plenty of time to allow for any hold ups in traffic and also to find a parking space so you can still get to the start line without feeling rushed.

Bells Sports Centre and Black Watch Museum car parks are the closest but there can often be events on and parking can be limited. We can also recommend St Catherines Retail Park, Asda and North Inch Community Campus, all of which offer free parking and are only a few minutes walk away from the start.

Please help us to continue to be a positive influence in the local community by parking sensibly.

It's the first Saturday in a new month and that means it's pacers week!

We are looking for people to pace the following times to help others get fast times or even PBs! Can you help?

If you'd like to help out and get your volunteer credit, email us on perth@parkrun.com

Please give us a couple of options in case your preferred time is taken by the time we receive your email.

This week 191 people ran, jogged and walked the course, of whom 12 were first timers and 14 recorded new Personal Bests. Representatives of 20 different clubs took part.

Today's full results and a complete event history can be found on the Perth parkrun Results Page. 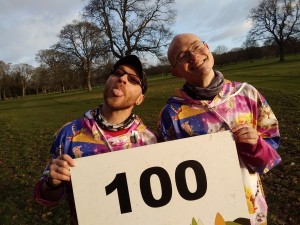 We received a Run Report created by AJ Hardy, a Run Director at Kirkcaldy parkrun, who visited us yesterday along with her friends Lee & Sam, who were about to do their 100th parkrun.

We really like it and thought we’d feature it here followed by the regular report that’s populated by parkrun.

A group of us had planned to travel to West Links for a spot of parkrun tourism.  Along with many parkrunners I have been watching the weather forecast for the last few days, hoping that the wind would drop and we would be able to run; Storm Malik clearly had other ideas.  I set out with plenty of time to spare but not long after I took the first diversion due to fallen trees I got a message saying they had cancelled and we were trying Perth instead.  A couple more about turns and I made it safely to Perth, I didn’t have a clue where I was going so was more than happy with that.

It was great when I turned up and saw people I already knew, either through other hobbies or regulars at Kirkcaldy (my home parkrun).  We were warmly welcomed for the first timers briefing and then I got to hear Paul’s RD brief for the first time.  Just before he started I was told it was good, it most definitely puts mine to shame!  It has given me a couple of ideas for mixing it up a little, but with only a week until I am next RD I don’t have that much time.

Having not planned to visit Perth I hadn’t looked at the route until I arrived at the sports centre.  4 very small hills…how small, I guess it is all relative but by the time I set off I forgot all about what I had read.  I really enjoyed the route; the hills were fine, a bit of tarmac and a bit of grass, which luckily wasn’t muddy.

A huge thank you to the volunteers, no event happens without you and it was great to have such cheery people out on course and at the finish line.

174 hardy souls turned out to run in the blustery weather.  26 people were first timers at Perth, with 5 of them coming along to parkrun for the very first time.  In the blustery wind 13 people achieved PB’s, huge kudos for that.

Today marked 100 parkruns for two of my parkrun buddies, Lee and Sam.  If anyone was running near them you would definitely have heard them as they were wearing cowbells on their trainers!  Their enthusiasm is infectious so I hope both the sound of the cowbells and their choice of fancy dress brought a smile to your faces.  We went into the Black Watch Museum café afterwards, complete with 2 sets of 100 balloons, which got a cheer from the other parkrunners.

I have only just started touring different parkruns so am keen to try different courses but I will definitely be back to Perth.  A huge thank you to Paul for letting me write the run report.

This week 174 people ran, jogged and walked the course, of whom 26 were first timers and 13 recorded new Personal Bests. Representatives of 24 different clubs took part.

Today's full results and a complete event history can be found on the Perth parkrun Results Page.

At Perth parkrun, we like to create a positive experience for everyone who participates in our events and also for those who happen to be passing around the time of our events and hopefully inspire them to come along.

To achieve this, we'd like to ask our participants to either congregate on the main part of the inch or stand to one side of the path to allow other users to get past.

We'd also like to ask our attendees to be respectful of residents who stay in the surround streets and avoid blocking driveways. Bells car park can fill up pretty quickly and there is also free parking available at the North Inch Community Campus, a short distance away from the start.