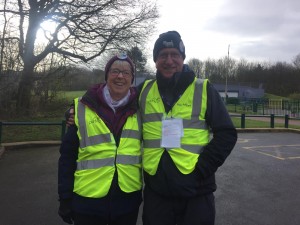 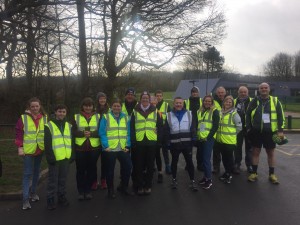 Our wonderful volunteers ensuring we can all enjoy our parkrun in safety and with the nicest of welcomes and support to help us round the course.

A huge well done to Mike Sherwin on his 100th Parkrun and thanks for his selection of (individually wrapped!) sweets and treats. Unfortunately Mike evaded the photos…again. We will be ready for you at run 250!

An absolutely awesome congratulations to Sue and Graham ‘Grahams Hill’ Lancaster who have both achieved their 100th volunteers’ roles today. Their support for this event continues to be a credit to Parkrun and all the Phoenix team are grateful for their continued participation.

This week 77 people ran, jogged and walked the course, of whom 15 were first timers and 12 recorded new Personal Bests. Representatives of 11 different clubs took part.

Today's full results and a complete event history can be found on the Phoenix parkrun Results Page.

For the current position regarding COVID-19(Coronavirus) and implications for parkrun events, go to any Parkrun webpage and follow the red banner link at the top of the page. We will also post updates on our Facebook page.

A chilly but sunny February Saturday morning, led to the commencement of run no 154 at Phoenix parkrun.

The Run Director Christopher Burgess and his 19 other volunteers made way for a great February morning parkrun consisting of 104 parkrunners (54 male and 45 females, with 5 unknowns).

First home today was the current male course record holder James Westlake (25-29), from Crawley AC, This being his 3rd appearance at Phoenix he didn’t quite beat his PB but still shot round in a fantastic 16.42 – the third fastest ever at Phoenix (he ran the 1st and 2nd fastest too!). He was also the highest age grade male today (77.25%)

Congratulations to the 5 first time parkrunners and the 6, first time at Phoenix, tourists.

Despite the cold conditions were ideal for running and there were 24 PB’s achieved today (9 male, 15 female)

A great morning with no problems. Well Done to all participants

Everyone is welcome as always but we encourage you to bring a female friend, colleague or family member and walk, jog or volunteer together for #IWDparkrun

This week 76 people ran, jogged and walked the course, of whom 13 were first timers and 15 recorded new Personal Bests. Representatives of 14 different clubs took part.

Volunteers and participants were delighted to be able to visit the newly opened CHI cafe for a hot drink after the event.

Today's full results and a complete event history can be found on the Phoenix parkrun Results Page.