There will be no Pitshanger junior parkrun on 25th December 2016 or 1st January 2017 - both of which fall on a Sunday this year.  Our wonderful volunteers deserve a well earned break !

It was another warm morning in the park on Sunday for event number 89, although the rain did appear just a tad before 10am.  Fortunately we'd had our fun by then and 71 juniors had circumnavigated the 2km course in a variety of ways.  Of special note was a slalom finish by Ben GRIGG whose first run with us was so much fun he took a rather circuitous route to the finish line involving the finishing cones. 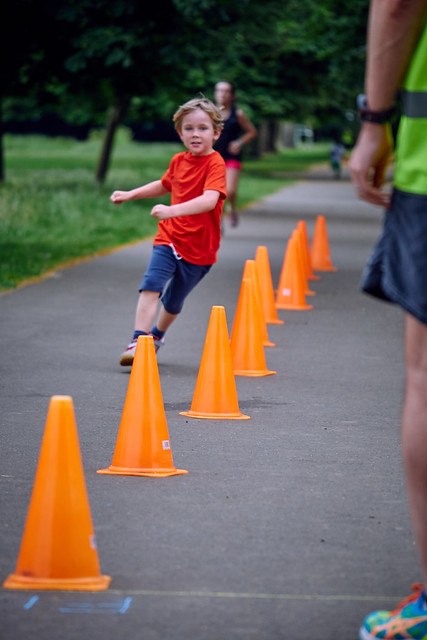 Yes, you guessed it - we also had photographer extraordinaire Bruce LI in attendance to capture such delights on his magic all-seeing camera.  His highly-recommended album can be viewed here:  ( https://www.flickr.com/photos/76479355@N07/albums/72157668126248843 )

The event also saw the beating of the female course record.  Lydia LOUW had tied the record a couple of weeks ago but this outing saw her beat her best by 11 seconds and record a time of 7.09.  Well done once more Lydia!

William PATERSON DENTON, the first finisher overall, also knocked ten seconds off his best and came in at 7.08.  Bravo!

There were plenty of PBs today - 18 in all so well done to you. And to the 5 first timers, Joshua and Thomas CRISP, Ben GRIGG, Esme CLARK and Kevin LAANE.

Thanks also to the volunteers - resplendent in their InterSport high vis jackets and led by Karen JACKS whose speedy processing of the results was mightily professional. 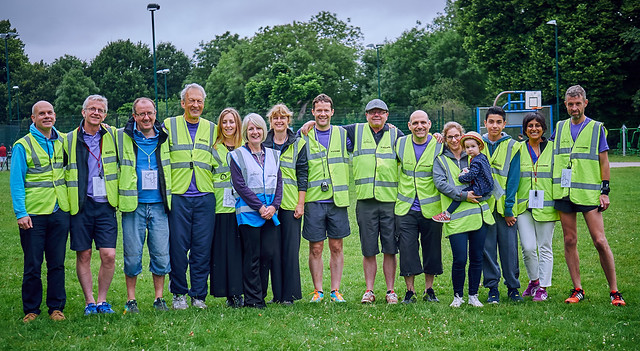 Until next week, and event number 90 - happy running! 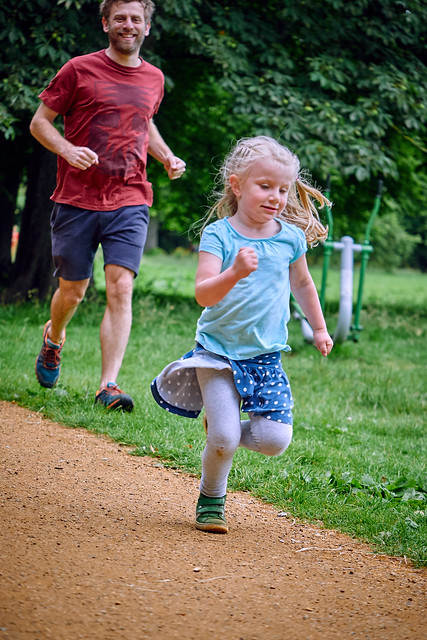 This week there were 71 runners, of whom 5 were first timers and 18 recorded new Personal Bests. Representatives of 6 different athletics clubs took part.

Pitshanger junior parkrun started on 5th October 2014, and since then 812 different runners, including participants from 29 athletics clubs, have completed 6,006 runs covering a total distance of 12,012 km, and there have been 1,283 new Personal Bests.

Today's full results and a complete event history can be found on the Pitshanger junior parkrun Results Page.

Well it was quite a sunny morning today wasn't it? Almost worth missing a week last week (for the Party in the Park) to see some actual sun.  Certainly, 80 runners thought it was nice enough so and we had another good turnout of volunteers (THANK YOU VERY MUCH!).

Katie JACKS continued to own the warm-up with some very professional looking moves that's bordering on the realms of choreography.  Thanks for getting your fellow juniors warmed up so well once more, Katie. 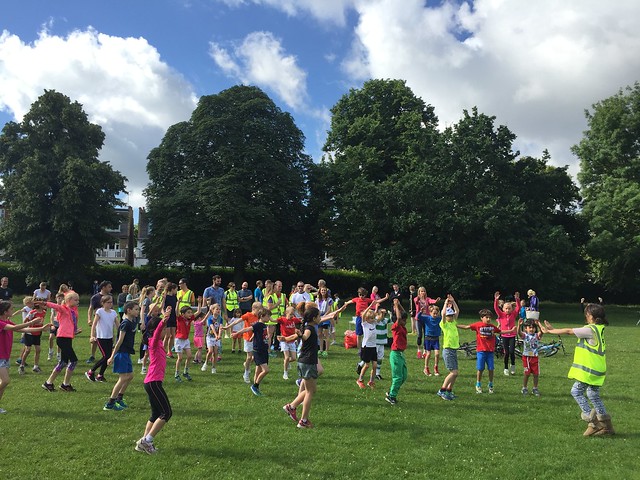 Jen WATT gave out wristbands to worthy recipients then sent the youngsters tearing round the course.  And there was a record bit of tearing as it happens, as Lydia LOUW managed to equal the JM11-14 record (held by Anna JANKE) with her new PB of 7:20. Congratulations, Lydia!

The results were speedily sent out this morning - we just had one adult in the finish funnel throughout the course of the run and although we welcomed 6 new runners, everyone seemed to know exactly what was going on and to avoid running through the finishline twice/ only running one lap etc..  Well done everyone!

Some of our regular runners (as well as Lydia) hit new PBs today - Sam SALEM on his 49th run, Abigail SWARC, on her 58th and Mia de VIVENOT on her 42nd.  That's fine reward for consistent efforts.  In all, 23 runners did their best times.

Finally, what's the well dressed runner wearing about town these days?  Well, as modelled below by Richard CUDD, today's tail runner, it's the orange parkrun T-shirt, with a special customisation with our event name. Feel free to zoom in on Richard's manly torso to read those special words: "Pitshanger Juniors". 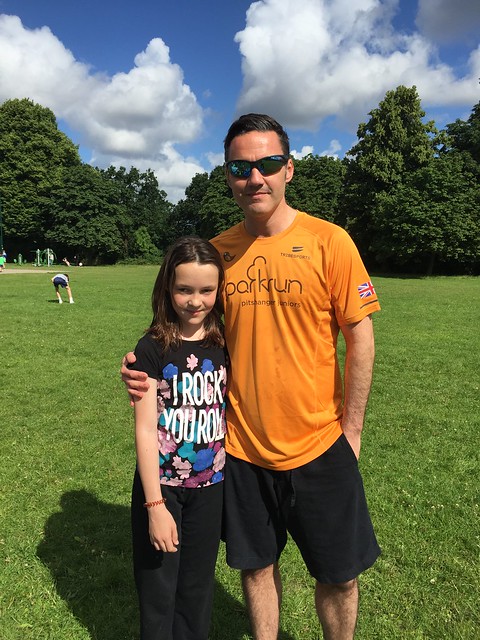 Such goodies are available via this link.  Christmas isn't too far away....

Until next week, Happy Running!

This week there were 80 runners, of whom 6 were first timers and 23 recorded new Personal Bests. Representatives of 6 different athletics clubs took part.

Pitshanger Juniors parkrun started on 5th October 2014, and since then 807 different runners, including participants from 29 athletics clubs, have completed 5,935 runs covering a total distance of 11,870 km, and there have been 1,265 new Personal Bests.

A late report this week, caused by foreign trips and English football watching - apologies, and thanks for your patience, to both of the regular readers for the delay :).

As announced via Facebook on Sunday we were blessed with Bruce LI once more as the man who is fast becoming a parkrun photo legend made another appearance in our 'hood.  The hunter became the hunted as i took this snap of the great man: 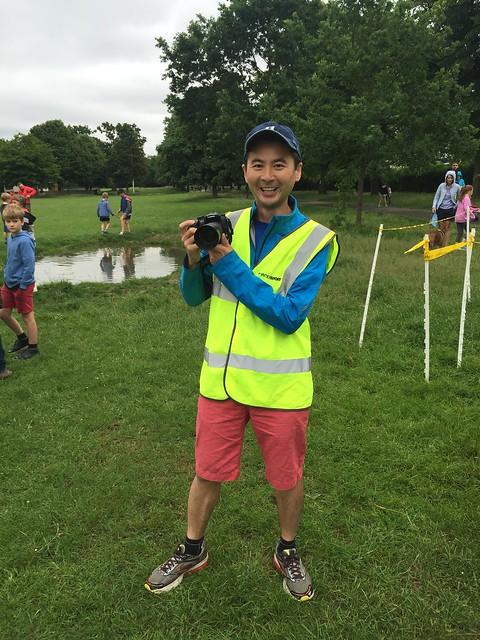 His fine work from the day's procedings can be seen by clicking HERE:  https://flic.kr/s/aHskBr82tJ

We had another great turnout of 74 runners (8 brand new parkrunners amongst them) and a whopping 23 Personal Bests including the first three finishers (see below).  The weather was dull but dry, though fifteen minutes after the last finisher had done their magic, the clouds opened. With a curious (well, not curious - it was just horrible) smell near the Cafe the results process was taken into her own home by Run Director Debbie KEENAN but it wasn't long at all before all was sorted and another run was done and dusted. Hurrah and well done to those volunteers: 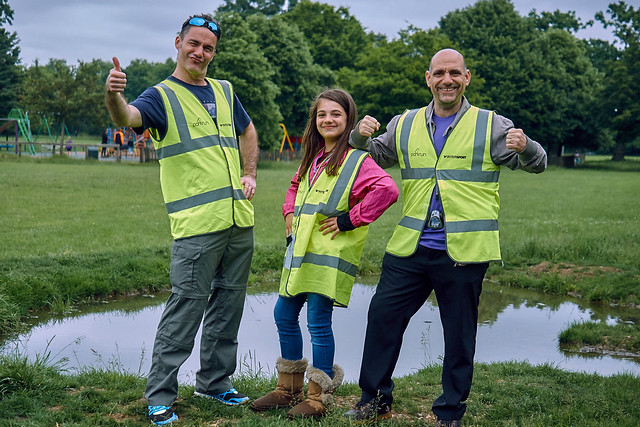 Come join in the fun this coming Sunday - the roster (helped by the lateness of this report) is already full which is great news!  And a reminder that the following week (26th June) there will be NO RUN because of the set-up for Pitshanger Party in The Park.

This week there were 74 runners, of whom 8 were first timers and 23 recorded new Personal Bests. Representatives of 3 different athletics clubs took part.

Pitshanger Juniors parkrun started on 5th October 2014, and since then 793 different runners, including participants from 29 athletics clubs, have completed 5,762 runs covering a total distance of 11,524 km, and there have been 1,221 new Personal Bests.

Greetings to you all! What a lovely Sunday it turned out to be - but mainly after the run had concluded, unfortunately!  Still, it was plenty warm enough and a great turnout of 93 runners during half term week (including a dozen first timers) was commendable indeed.  We also had a good gathering of volunteers so things are definitely looking up!

parkrun is not a race, it's a timed run - but the first five finishers today had very similar times - all separated by just 8 seconds and all very quick indeed (under 7.30).  There were the three speedy HERSIs in there (Mahiis, Sudeys and Najiib) as well as Otto PACKHAM-LAWRENCE and first finisher William PATERSON DENTON who both claimed their fastest ever times - Otto reaching an 80% Age Grade which puts him 6th in the all time list at Pitshanger.

For those who don't know what the Age Grade is, it's a cunning way of putting all runners on a level-playing field.  The age-graded score is the ratio of the (approximate) world-record time for the runner's age and gender divided by the runner's actual time.  So if you get an age grade is 50% it means the world record time for someone of your age and gender would be exactly twice as fast!

Here's a snap (from timer Paul THOMAS) 10 seconds into the run: 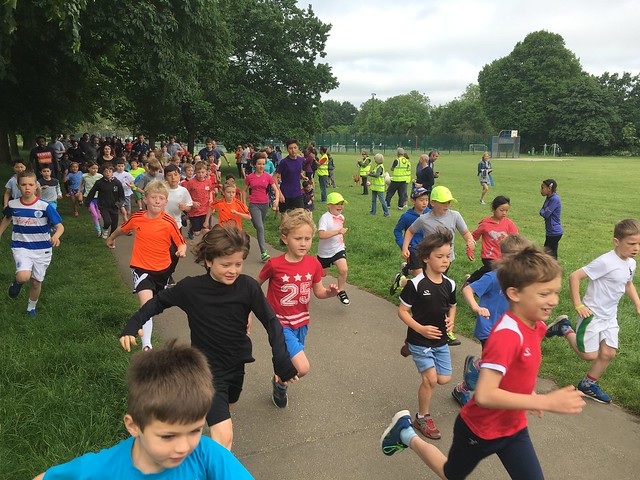 Well done to everyone for taking part and to William, and to Lucia WEST, our first finishing female (for the second time) who also got a PB.  10 other PB getters were in our midst today, so clap clap clap to you all and to those who turned up and had a great run at no matter what speed.  A cuddly rabbit did particularly well, too.

Since the run started approximately 18 months ago, you may have noted that the park has a new water feature/ puddle, recently expanded due to some JCB action.  It's not the most beautiful stretch of parkland water and is rather proximate to our finish funnel. But it doesn't look like it's going to shrink, so we have to take a bit of added care - not least that we don't get splashed by visiting hounds. 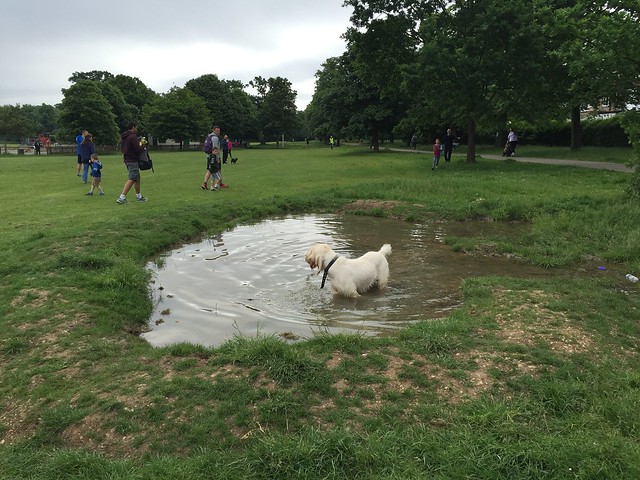 We are contemplating having the body of water named "Lake Kelvin" after our wonderful Event Director, though other suggestions are very welcome.

Until next week, have a good return to school

PS: While you're reading please note that in three weeks (26th June) there will be no parkrun event due to the Pitshanger Party in the Park.

This week there were 93 runners, of whom 12 were first timers and 13 recorded new Personal Bests. Representatives of 4 different athletics clubs took part.

Pitshanger Juniors parkrun started on 5th October 2014, and since then 785 different runners, including participants from 29 athletics clubs, have completed 5,688 runs covering a total distance of 11,376 km, and there have been 1,198 new Personal Bests.