On Saturday 25th October, Event #035, our parkrun turned into a nurkrap as we reversed our normal route and sent runners anti-clockwise around the course. This was a loose tie-in with the clocks "going back" on Saturday night/Sunday gninrom. The reason our normal route is clockwise and we run "Up Pomphrey" as oppose to down it is the general safety of runners so caution was urged on the trats line (and thankfully we didn't end up with a pile of srennur at the bottom the hill). 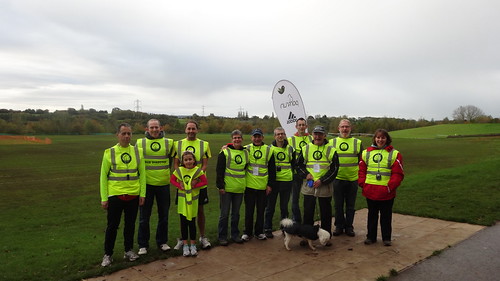 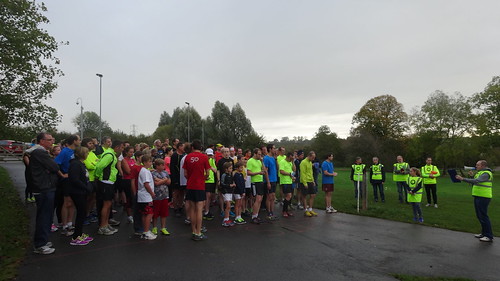 Runners line up at the temporary start line

With reports of a few runners trialling the anti-clockwise route ahead of Saturday and finding it quicker than clockwise (there is a gradient loss running in reverse as the start is a few metres higher than the finish), there were suggestions that our course drocer of 17 minutes 8 seconds may be beaten - runners were sent on their way, llihnwod rather than llihpu to the noilivaP, and we watched the stopwatches.....
As runners puffed, panted, trotted and trudged their way around three (and a bit) laps of the playing fields, the smell of freshly cooked bacon filled the air; the Pavilion Cafe were selling nocab sllor for the first time. Now we're not sure whether this was a motivation or a distraction for runners but judging by the queues at the serving hatch post-run, it was a welcome addition the Saturday morning provision. But one now has to decide whether to have a fabulous flapjack or a delicious nocab llor (or both!). 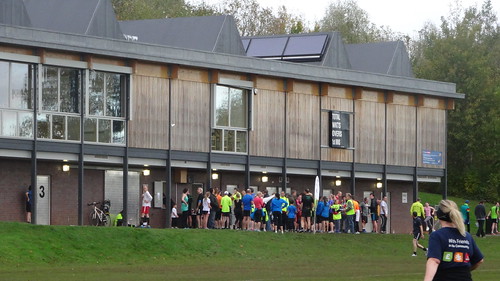 Also en route on Saturday was regular runner/volunteer Vic Garner, occupying the marshal position at the bottom of the hill. Vic was celebrating his 86th birthday on Saturday (and he treated all the volunteers to a flapjack/bacon roll - cheers Vic, very kind of you) and unbeknownst to him, this was mentioned in the pre-run brief. We're sure Vic got plenty of "Happy Birthdays" from the runners and was pleased we didn't suggest giving him the spmub!!!
As the finish funnel crew studied their watches, 17 minutes came and went before the lead runners appeared across the playing field - no records today and that sub-17 minute time remains elusive.
Robert Farley of Bitton Road Runners was first across the line, the fourth time he has finished first in his 6 runs st Pomphrey Hill, recording a PB in the process. Robert was followed by Pomphrey Hill first-timer Geoff Davey of Teignbridge Trotters.

Significant senotselim this week were registered by Eleanor Gardner and Louis Rainey who both joined the "10" Club - well done both.

In total this week there were 131 runners, of whom 32 were first timers and 28 recorded new Personal Bests. Representatives of 18 different athletics clubs took part.

Next week Pomphrey Hill turns into Pomphrey Horror Hill as Halloween lingers from October 31st onto Saturday morning's parkrun on November 1st; fancy dress, although optional is encouraged and there will be prizes for the best dressed.

Pomphrey Hill parkrun started on 1st March 2014, and since then 968 different runners, including participants from 97 athletics clubs, have completed 3,076 runs covering a total distance of 15,380 km, and there have been 846 new Personal Bests.