Many thanks to Martyn Poole for this weeks run report.

Is this be the last of the nice weather? I bet we all could not believe how nice it was when we woke up.  Some may say that the heat of today was too hot and personally I was tired and exhausted when I crossed that finish line.  This, I am pleased to say, did not stop the 389 sun worshipers coming out for a morning stroll around Pomphrey. 52 were first timers and 58 recorded new personal bests. Congratulations to you all. And welcome to all who joined us from Eastville park, I hope the hill treated you kindly.

First off let me give a massive thank you to our 29 volunteers, what an amazing bunch of people we have at Pomphrey.  Without further from me, please thank this week’s high vis heroes

You all did an amazing job!

Before I continue I would personally like to thank Trudy Reed for a fantastic job as RD, Daniel Smith for his exceptional First Timers Briefing and Ris Scott for checking the course and doing some amazing last minute trouble shooting! 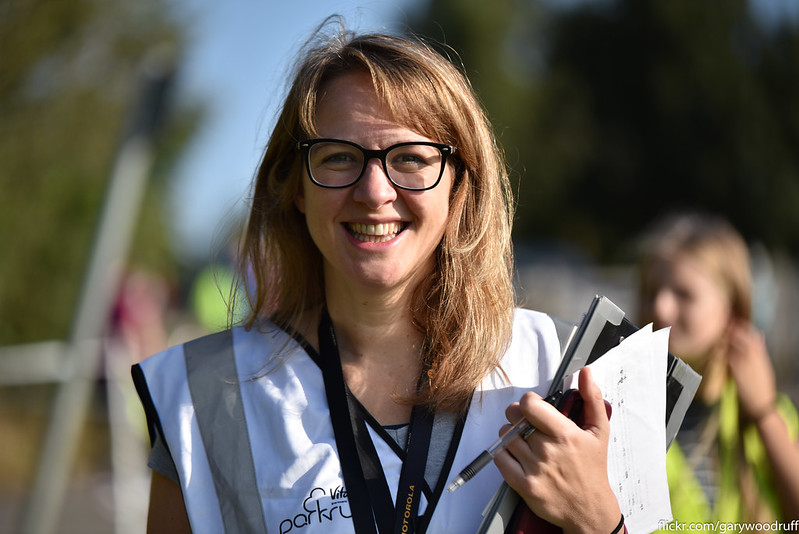 Unfortunately we missed out this week on a group photo as I think things got a little hectic with the new runners announcement and Gary being called over to take milestone pictures.

While on the subject of Mr Woodruff some of you keen eyed Pomphrey locals may have noticed him sporting a new look camera, Gary has decided to take his photography to the next level and has bought himself a new Nikon. The lens you might have noticed is huge and he thinks it may have been a mistake as the extra weight has now slowed him down running from location to location and he has even given up with Mr Hill, maybe I’ll get him to come to my gym and work on those arm and leg muscles of his.  Gary would like to apologise about his pictures this week as he is still getting into the hang of it and had to delete lots of shots that were out of focus.  I have had a look through his pictures and felt this is rubbish and every one of them looks fantastic and I hope you join me in thanking him for all the effort he puts in, not only during parkrun but uploading them to Flickr.
Any of you wondering what happened to his last camera, well I now have purchased it off of him in my journey to reach his brilliant work, starting with the below picture.  Remember Gary, no returns 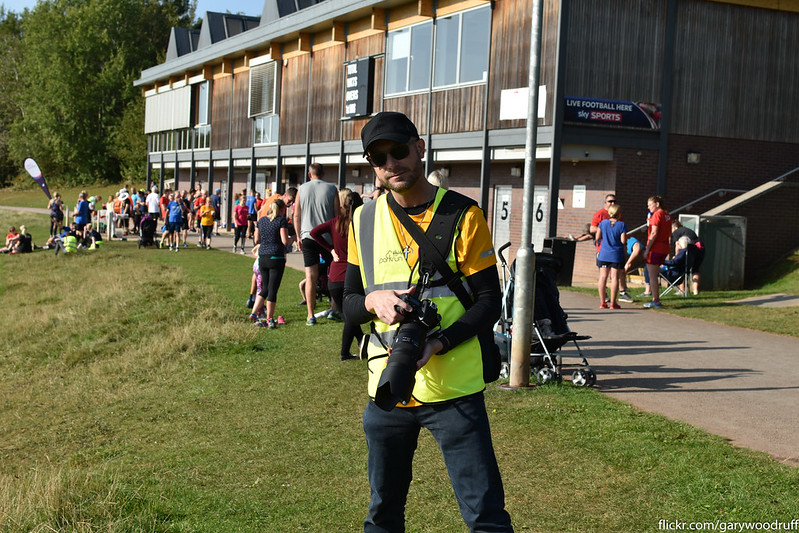 A word from some of today’s runners

I had been struggling to find things to chat about this week so felt as Kate Davies Speak was joining us to support her family running this was the perfect opportunity to get some quotes in.  Kate and her husband Steve both run at Pomphrey every now and then and when they join us, they usually bring an entourage of family members only. This week however Kate was just an observer as she is due to give birth any day now. She has stopped running 6-7 weeks ago when she found herself waddling around so now, she is here to support, I did ask if she wanted to help out Pomphrey by volunteering however, I think we have missed this opportunity now.  Kate assures me that her new baby will be a future parkrunner and she will be back as soon as she can. Kate on behalf of all of us we wish you all the best and expect you to be running Pomphrey with a buggy in the near future. 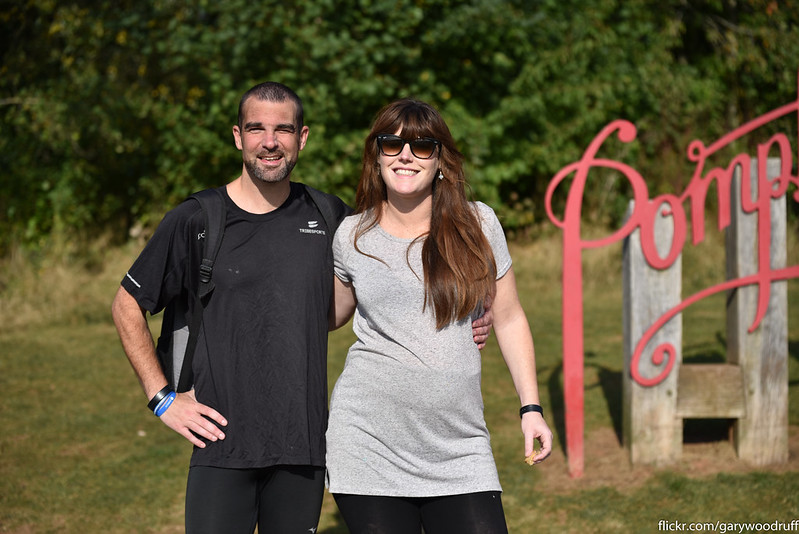 While on the subject of buggy’s I caught up with Cathy Boynton who was running today the first-time post baby with a buggy.  Emily is only 7 months old and from what I gather enjoyed her first trip around Pomphrey, Cathy told me it was hot today and the hill was hard going up and coming down wasn’t much better as she had to use the buggy brake. We actually had a lovely chat and I learnt so much about these running buggies that I think I could sell them to future parkrun parents.  Andrew (Cathy’s husband) let me take out Emily for a quick run around the park to get a feel for how it handled and I was surprised at how unexpecting easy it was.  I am taking nothing away of course from Mr Hill and can only really comment when I have tried 5k myself.  I look forward to seeing them both next week and hope that Cathy had a great birthday, another milestone Cathy? 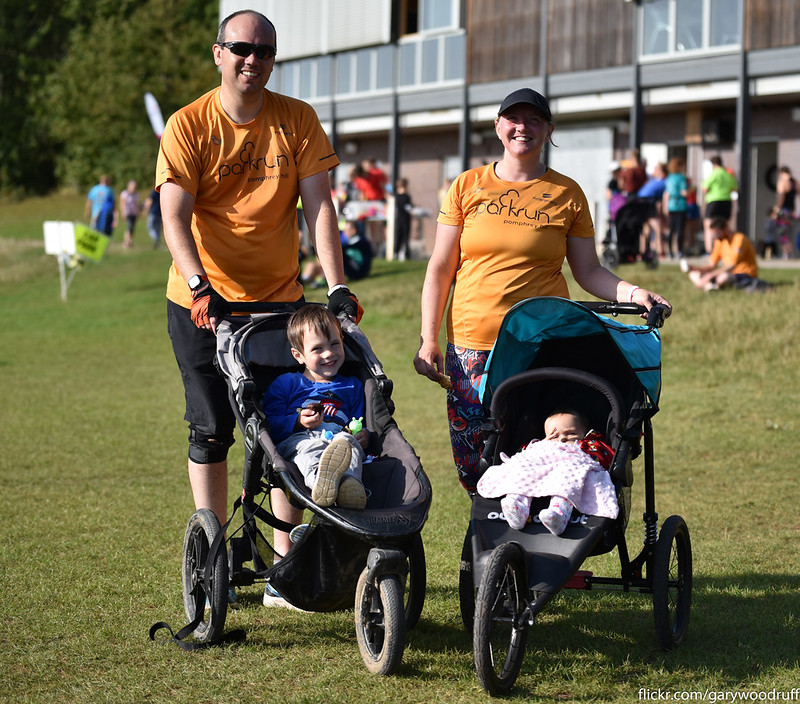 Now to finish with some Event 288 stats

First finisher was a well know person called UNKNOWN so I will move onto 2nd spot which was Leion Grogan with a time of 18:03, first female was Tiffany Partridge with a time of 22:05 No surprise that due to the hot weather both PB’s remain the same.

James Dorrell and Emily Phillips where the only juniors to celebrate their 10th parkrun, Emily run at 46:10 but her PB stays at 38:51 while James sets a new PB of 26:34 and promises me that he will soon run Ashton Court

Onto 100 and we had just the one, Ruth Dorrell, who was joined by her son James who ran his junior 10th. James has completed his Bronze Duke of Edinburgh (13 volunteers which happens to be more than running). It was nice to see both mother and son running milestones together especially as they both celebrated with party hats and balloons.  Ruth told me that she started at Little Stoke and now runs at Pomphrey and has competed all the parkruns in Bristol.  What makes this run and joint milestone extra special is they both made their PB’s today, James at 26:34 and Ruth with 25:50, well done to both of those PB’s.  Ruth has been running parkrun since 2014 and her PB comes at just the right time as her last PB was March 2018.

Ben Smith celebrates his 25th volunteer doing all volunteer roles at Pomphrey and finished his Bronze DofE on 24 so it was nice to get two consecutive celebrations.  He was doing an excellent job of managing the finish funnel and told me that his favourite roll was tail walker but we know that’s because you get a run in there as well.  Congratulations to Ben for both of his achievements.

A note from the Run Director:

On a hot day it was particularly great that we could announce that the Pomphrey hatch will be offering re usable cups for tap water. There is a jug of tap water on the table which you are welcome to help yourself to. Please remember to bring a water bottle to reduce the amount of waste. If you have forgotten your water bottle please ask for a reusable glass which should be returned to staff.

On the 5th October we will be celebrating International parkrun day. This is the 15th anniversary of parkrun and we are inviting everyone to wear their parkrun T shirts and join us for a photo at 8:45