Good afternoon all you lovely people, it seems like parkrun was a strange dream long, long ago. Most of us are now getting used to the new norm and I know that most of you are itching to get back to the best parkrun the world has to offer.  Until this day comes I have some more runners profiles for you. I hope you have been reading them all as I plan to do some spot questions when we are all back so better get studying up. This week I have three more runners for you Julia, Richard and Jules. 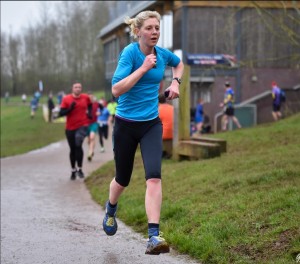 Q1 - What originally brought you parkrun?

Friends had mentioned these things called ‘parkruns’ so thought I’d check them out. My first was back in April 2015 in Northampton whilst visiting my parents, I loved it and followed this up one week later at Pomphrey – oh my goodness, I was not prepared for that hill!!!! The clue is most certainly in the name lol.

Q2 - Which running or volunteer story are you most proud of?

Severn Bridge parkrun back in February (an out and back route across the old bridge itself). Storm Dennis was in full swing and the bridge was closed to traffic due to high winds but the run was on! Off I set being pushed along by a nice tail wind…..and then the half way point arrived and I turned back into the oncoming wind – oh boy, I’ve never been in such strong winds let alone run in it, it felt like my cheeks were about to get blown off.

Q3 – What you are doing to remain positive?

Been doing a bit of dabbling in the kitchen.

Q4 – What you are doing to remain active and fit?

I joined Emersons Green Running Club in February and although we can't train together we’ve been doing lots of fun challenges like spotting letters of the alphabet while on our solo runs….letters Q and X took a bit of searching!

Q5 – apart from Pomphrey Hill which is your next favourite parkrun and why?

Having recently retired from netball (my life for 30 years) I was looking for that next ‘something’. Parkruns were that ‘something’ and I’m looking forward to running and volunteering again. 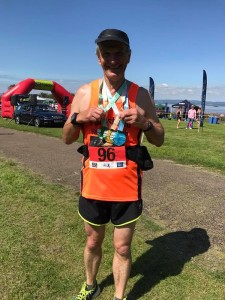 Q1 - What originally brought you parkrun?

Having taken part in running events and races since 1987, I was intrigued to give parkrun a try; my first was in July 2011 at Ashton Court and I quickly became hooked! I've now done 206 parkruns at 43 locations, mainly at Pomphrey, Clevedon, Ashton Court and Eastville. Included are 41 at Little Stoke before it ceased.

Q2 - Which running or volunteer story are you most proud of?

I co-led a number of beginners running courses for Bristol City Council and felt quite proud when some of those new to running or returning to it completed their 5k "graduation" at parkrun.

Q3 – What you are doing to remain positive?

I try to remain positive by thinking and hoping that group runs, events and parkruns will return one day.

Q4 – What you are doing to remain active and fit?

Afraid I'm setting a bad example in respect of remaining fit and active. Daily family walks are OK but it's not the same as running! My occasional runs are based on the popular "street name challenge" in which you find roads beginning with the initial letters of a selected keyword such as "PARKRUN", "BARCODE", etc, and running to each, preferably in order. I did "VE-DAY" on 8 May by running to Victoria Road, Etloe Road, Devonshire Road", Alfred Road and York St.

Q5 – apart from Pomphrey Hill which is your next favourite parkrun and why?

My next favourite parkrun was whilst on holiday last year: Bakewell. The route was entirely along the once busy main railway line from London to Manchester, now a superb local railway path for walking, running and cycling. All parkruns are lovely but this captured my idea of perfection and the breakfasts are legendary to those who have been there.

I was once part of a "choreographed artwork" near Arthur's Seat at the Edinburgh Festival (and the following year at Salford Quays) called "The Speed of Light". Very emotional and very proud.

I am also one of the small group of Clevedon swimmers appearing in the BBC1 "ident" which appeared before BBC1 programmes until recently. The general reaction from friends has been "oh, no; not him again"! 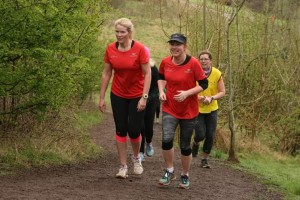 Q1 - what originally brought you to parkrun?

Meryl kept trying to persuade me to give it a go - took a while but I eventually convinced Vic Burchill to join me one week. We didn't die of exhaustion or embarrassment so came back the following week.

Probably proudest watching my kids run parkrun and achieving really good times - before they became lazy teenagers who now won't get out of bed.

Q3 - what you are doing to remain positive?

I'm keeping in touch with family - we do bingo and a quiz a week, both themed so our fancy dress stockpile is coming in handy. I'm also drinking a LOT of cider!

Q4 - what you are doing to remain active and fit?

I'm running more than usual just to get out of the house and have been doing some of the Joe Wicks classes (mainly because I like to watch Joe Wicks ).

Q5 - apart from Pomphrey Hill which is your next favourite parkrun and why?

I've only ever done Pomphrey Hill - 196 so far. Vic and I plan to do all our 250 parkruns at Pomphrey then we might try somewhere else.

I hope I get to a hairdressers before I have to go back to work!

Thanks Julies, Rich and Jules for sharing your stories with us all!

So what have we learnt today?
Meryl forces people to sign up to parkrun, Jules fancies a bit of Joe Wick and running the Severn Bridge parkrun can possibly blow your cheeks off!

If you'd like to see your name in lights, then please email us at pomphreyhill@parkrun.com with answers to the following questions:

- a photo of yourself (or a link to a photo)
Q1 - what originally brought you to parkrun?
Q2 - which running or volunteer story are you most proud of and would like to share?
Q3 - what you are doing to remain positive?
Q4 - what you are doing to remain active and fit?
Q5 - apart from Pomphrey Hill which is your next favourite parkrun and why?
Q6 - is there anything else you would like to share?

These will be published over the coming days and weeks on our parkrun website and our Facebook page.

I hope you are all well, I miss every single one of you, I hope anyone having a birthday can at least enjoy themselves and until next time; be safe, stay healthy and look after each other.
Martyn