It was lovely to be back at Porty this week after a few Saturdays away (including some parkrun tourism!) and Figgate Park was looking magnificent in the spring sunshine for our 100th parkrun. I know Figgate Park has its fair share of wildlife but I certainly wasn’t expecting a T-Rex!

Congratulations to those who joined the 10, 50 and 100 run milestone clubs (you kept that quiet!) and Gary Hall who joined the 25 volunteer club. Next week, April 15th, is our second birthday so dig out your best party trainers and arrive in good time for the annual awards ceremony which will take place before the run.

Ian’s photos of the run can be found here. 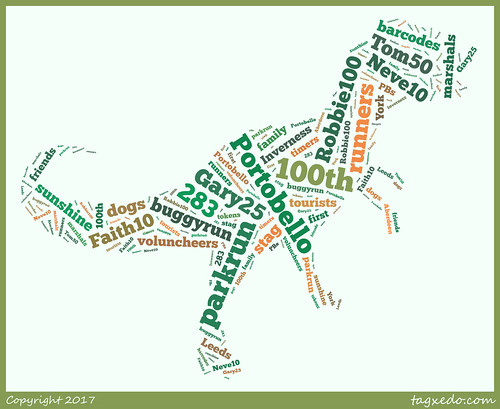 This week 283 people ran, jogged and walked the course, of whom 52 were first timers and 68 recorded new Personal Bests. Representatives of 32 different clubs took part.

Today's full results and a complete event history can be found on the Portobello parkrun, Edinburgh Results Page.