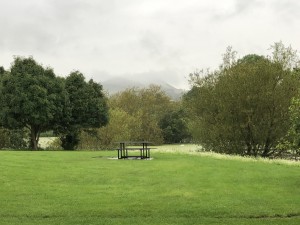 After a week of melting in the heat, the great Scottish summer returned this morning with a dreich forecast and another torrential downpour mid-run. I'm not sure what we've done to upset the parkrun weather fairy but 2 weeks in a row is no laughing matter!

The weather didn't deter 261 of you pulling on your trainers for 3 laps of the park and despite the rather slippery paths and bridges 26 runners recorded a personal best.  We welcomed 45 first timers to Porty parkrun including a number of visitors from across the UK including Manchester, Andover, Yorkshire and Carlisle, as well as a slightly late running, long distance visitor from Australia.

The good news is that towards the end of the run some guys from the council came down and have boarded over the gap in the bridge so it is safer to run on.  Hopefully it will be fixed properly soon but thank you all for taking care on it this morning, and to the marshals for some great cone work!

Milestone congratulations this week go to:

The event was made possible by 22 slighty soggy but awesome volunteers:

Today's full results and a complete event history can be found on the Portobello parkrun, Edinburgh Results Page.