412 people woke up on Saturday morning in South west London, drew their curtains, saw a beautiful early autumnal morning and decided the Bank Holiday Saturday was not to be spent crawling past Stonehenge, eating sandwiches in a Welcome Break or on the Honiton bypass. Richmond parkrun in all its glory called. 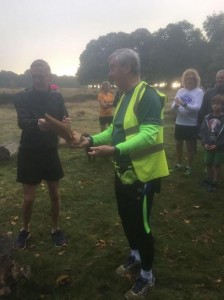 Fred Croft would have approved of their decision. He passed away on Tuesday, Run  Director David Pennell sadly informed us. David introduced him as having been a stalwart of our parkrun family. He was everything that our Saturday morning embraces, always welcoming, entirely self effacing and very witty.

In bare statistics, he had run 306 parkruns in 8 years, 300 in Richmond Park, and volunteered 105 times. It is volunteers who keep the parkrun alive, but he did so much more than that especially as Tail walker and Run reporter. He was Reporter on a valued 27 occasions and - his forte - Tailwalker, 67 times.

Reporting on his own tailwalking.

“It plays to my strengths of course - in other words, I am not fast. Never was, now never will be. If I had to choose a motto, it would probably be festina lente ("They also serve who only stand and wait" should probably be reserved for the funnel timekeepers and tokens and the scanner volunteers waiting patiently for me to turn up).

But more than anything, I enjoy encouraging people. Going at a pace which makes it easy to chat - but making it clear that if the slower runners want to suffer in silence, that's their prerogative”

Richmond parkrun 9th Birthday 2016. Award was given to Fred CROFT for his valued Report-writing. Fred has willingly taken on a huge share of the work this year, and apparently ‘at least two of his reports were funny!’

Marathon History was very much a feature of his reports.

“Not that anyone knows how long the first full Marathon was: the distance from Marathon to Athens is about 40 kilometres (24 miles). As you all know, the Athenians defeated the much larger Persian army at the Battle of Marathon in 490 BC, and Pheidippides, a hemerodrome (specially trained courier runner) ran back to Athens and delivered the message “rejoice! We conquer!” then promptly died of exhaustion. You might think that a professional runner would have taken about 24 miles, give or take, in his stride (pun) but he had run from Marathon to Sparta and back the previous two days seeking reinforcements which didn’t come (about 150 miles round trip), then taken part in the battle before running off to deliver the result, so he might be forgiven for feeling a bit knackered. And by the way, the Greek for victory is Nike, hence the well-known running shoes. Not invented by the ancient Greeks, of course. They wore Brooks. And further trivia: the field of battle was thick with wild fennel, or μάραθος in Greek. Hence Marathon, of course”.

On Saturday morning, Fred’s wife, 3 children and their partners were at the briefing. His son James, with his sister Emma spoke so proudly of their father, a Government Lawyer, with few hobbies other than running, who regarded his Red 50 parkrun milestone shirt as his major honour.

Saturday was a beautiful morning. 59 of the 412 runners were first timers, one first timer was a visitor from the Argentine and a parkrun tourist from South Africa. The pleasantly cooler but sunny conditions encouraged 50 pbs. Richard Van Der Leeden, Saturday’s lead bike, told me on the way down Sawyers Hill there had been a lead group of 10 runners, which thinned down to 3 across the Sheen Gate grass. At the start of Tamsin trail, Jack Congdon (SM20-24) had established a 10’ lead. He was first to trouble the Timekeepers, with a pb of 17:45, just 12” ahead of Thierry Icart (SM50-54) with age grade 82.17% . Isabelle Franco in her 13th parkrun was the first woman in 18:57, she, impressively is in JW15-17 and achieved an 80.74% age grade. Unsurprisingly those last two were the highest age graders.

On this morning, remembering Fred, the most important voluntary task of The Tailwalker, was undertaken by Paul Cook with the help of mechanical aids. Paul walked the 5km on crutches, happily talking, smiling and giving encouragement to a group of parkrunners who chose that beautiful morning to spend 58 minutes enjoying Richmond Park.

Stalwarts are just as important as pbs.

With a lot of help from Andrew Brown and Sally Woodward Gentle, just two of the very good friends of Fred Croft from Richmond parkrun.

This week 412 people ran, jogged and walked the course, of whom 59 were first timers and 50 recorded new Personal Bests. Representatives of 35 different clubs took part.

Today's full results and a complete event history can be found on the Richmond parkrun Results Page.

PS This Saturday was also memorable for the visit of parkrun's founder, Paul Sinton-Hewitt, with a Guardian writer whose excellent comment piece, with fine photos, was published on Wednesday : www.theguardian.com/commentisfree/2018/aug/29/forget-profit-love-fun-innovation-parkrun