With the further loosening of Covid-19 restrictions confirmed by the government yesterday, we're pleased to confirm that Rickmansworth parkrun IS BACK! We will restart on Saturday 24 July at 9am in the Aquadrome and we can't wait to see our regular runners and volunteers again after such a long enforced break!

In line with guidance and to ensure the utmost safety for all at our events, there will be a few changes for both runners and volunteers. Full details of parkrun's Covid-19 Framework can be found here.

Everyone loves a list, and parkrun HQ have come up with ten important points for all runners to remember and put into practice when attending any parkrun after we restart:

The core team are itching to welcome parkrun back to Ricky Aquadrome, but as ever we will need help from our band of trusty volunteers. With the new safety measures and protocols, we'll need more volunteers than ever to put on each event. We've already had a few people volunteer, but please get in touch by email (rickmansworth@parkrun.com) if you can help out at any events in the coming months. As ever, all volunteers will be fully trained and prepped ahead of the event, and your safety will be paramount at all times.

We can't wait to see everyone again and have parkrun return to our Saturday mornings. Thanks and well done for all your patience and resilience over the last year or so. Hopefully the return of parkrun marks another big step towards a return to normality?!

Afternoon parkrunners. As the lockdown restrictions have loosened today, we wanted to give you an update about Ricky parkrun reopening.

Unfortuately, we are not yet able to confirm a restart date for our event. It almost certainly won't be June 5 as parkrun HQ had hoped, but we may be able to restart once all social restrictions have ended at the end of June, as long as we can get permission from Three Rivers District Council to do so.

Thanks for your many messages of support and offers to help; we will need both runners and volunteers to restart parkrun, and we're all really hopeful that we're not too far away from that day. We'll let you know as and when anything changes. Until then, as the obligatory cute cat (whose picture I'm struggling to upload...) would say, hang in there baby...

Well I have to say that despite the rain, last Saturday was one of my favourite parkruns. The Ricky Running Sisters cheered, clapped and encouraged everyone round. There was music and a poem for Rose Goodchild, the Sisters’ Leader who achieved her 100th parkrun. Rose and her team are instrumental in encouraging and supporting new runners and they have many success stories of sisters who have gone way beyond the 5k they originally had as their target. They also volunteer regularly at Ricky parkrun for which we are very grateful. 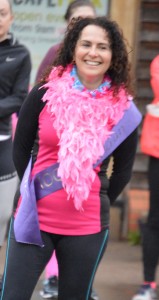 This week 524 people ran, jogged and walked the course, of whom 55 were first timers and 66 recorded new Personal Bests. Representatives of 34 different clubs took part. 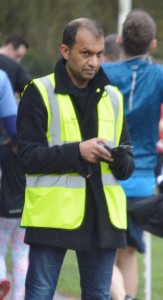 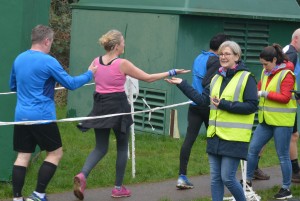 We applaud the milestones achieved this week:

A special thank you to athlete Ali Young, one of our regular supporters who kindly took home a parkrunner who had taken poorly after she finished the run. That’s exactly what the parkrun spirit is all about. 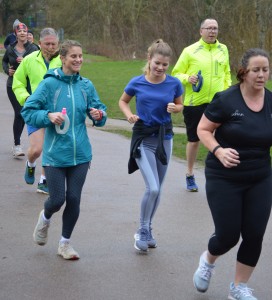 I conclude in my final duty as Run Director at Ricky parkrun that it has been a great pleasure in volunteering at such a superb parkrun. Coincidentally, like my friend Rob Withall, my first volunteering stint was on 13th May 2017 and since then, it has given me considerable pleasure in taking part in all sorts of different roles as well as trotting round. Thank you for tolerating my Run Director briefs, the drum rolls, the guinea pigs and finally the poetry (well I had to go out on a high!). No doubt I shall see many of you very soon, either at Ricky or just across the border. Until then, happy trotting and keep up the parkrun spirit.

All the very best 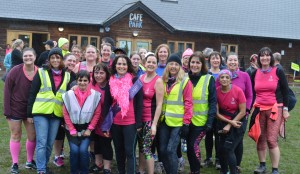 The event was made possible by 35 fantastic volunteers:

The high winds and storms held off this Saturday and 540 people ran, jogged and walked the course among them where 52 first timers as well as representatives from 38 different clubs.

A big congratulations to 105 of you who recorded personal bests this week.

Some of you will be aware that this week was my last week as RD at Rickmansworth I will return from time to time to volunteer. I have been volunteering at Rickmansworth since 10th May 2017 and that seems such a long time ago I am moving on to become Event Director at a new event that will hopefully be starting this year.

2 of our new tokens 52 and 368 have wandered off on an adventure however the finish token family would like 52 and 368 to return so the family can be whole again. If you happen to be one of the people with either token could you, please return 52 or 368 their family misses them. Please do not take the finish tokens home with you we have only just replaced the old set and the new set cost £120.

The event was made possible by 32 amazing volunteers who helped the event run smoothly.

We did have one issue and that was several people being rude to our barcode scanners when challenged over producing their parkrun number on their phone. Parkrun policy is not to accept runners barcode on their phone and to produce one on your phone is treated as no barcode. Remember no Barcode no Time and rudeness towards volunteers will not be tolerated. Remember that person volunteering has given up their time to enable the event to take place.

Each week we ask for volunteers and with over 500 of you running each week it would be nice to see some new faces stepping forward. I feel that some people have forgotten that without the volunteers the event would not happen, and it is always the same people stepping in to fill gaps in the roster or volunteering.  It does not matter if you have never volunteered before you will be briefed on your role on the day giving you all the information you need to carry out role.

To volunteer all you need to do is E Mail Rickmansworth@parkrun.com, when you E Mail in please let us know what role you would like to do and most importantly please include your parkrun number.

This week 677 people ran, jogged and walked the course, of whom 81 were first timers and a whopping 143 recorded new Personal Bests. Representatives of 44 different clubs took part.

Well what a wonderful time we had! Hillingdon AC did us proud with their volunteer takeover and pacing. I was delighted to read on our Facebook site all the messages of thanks for the PBs gained and encouragement given by our lovely pacers. Watch this space as later on in the year Hillingdon AC have promised to return. 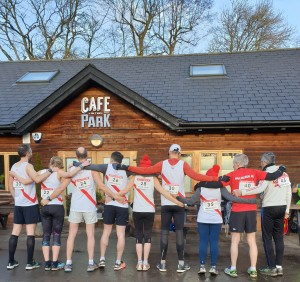 As our numbers have increased, the king of the funnel, Rob Withall decided to experiment a little at our start line and created a funnel there which worked really well. The tape didn’t break at the strain of everyone bursting through the sides of the it and the start moved a lot quicker and more orderly than in recent weeks. While everyone went off for their trot, Rob and his gang quickly dismantled the start funnel and built the finish one to replace it.

Huge congratulations to the following milestoners:

Oliver Southon (Junior) – 10 and he got a PB to celebrate!

The event was made possible by 35 fabulous volunteers:

Have a great week.