O M G!! The run this week was most definitely a week for breaking records.

Firstly, the number of runners, 476 to be precise, more than double our previous course record of 213 from week 1 and almost 4 times our usual weekly number. Secondly, the amount of volunteers that made up the "Helpers of the Hawk" roster, 35 hi-viz hero's. Thirdly, this is the first time we've had to use the overflow parking; the carpark marshal team did an amazing job in ensuring all the runners were able to park and get to the start in time, every available corner of the main carpark was utilised. Last but definitely not least both the male and female course records were broken - more about this to come later.

We (the core team) arrived nice and early, earlier than normal, to give us plenty of time to set out the course markers and super long finish funnel before everyone began to arrive. We had anticipated a rise in numbers due to Rosliston being a) a relatively new event and b) the closest parkrun to Catton Park, this being the location for the annual Thunder Run which would be taking place from 12pm onwards.

The volunteers began arriving which were made up of a perfect mix of local regulars and some very experienced volunteers from all over the country; we had various event directors, run directors and ambassadors so we were confident that we would be able to cope with whatever the event threw at us.

As the runners started to arrive we were all pondering as to how many we thought we would have, me guessing and very reserved 270 (an increase of around 150 on a standard week) while Stephen Lee was closest with a guess of 465. Many of the runners were seen taking photos with the iconic wooden sparrow hawk and the National Forest symbol log sculpture near the carpark.

A first for Rosliston was run director Sarah's 360 degree run brief, which was delivered calmly and informatively with plenty of local info as well as ensuring everyone was made aware of the parkrun code.

Off down the hill the runners went to the start, the marshal on the x-roads now knew that we had got a much larger number than normally as usually the first that is seen of the runners is the first ones arriving after they had run the first 300 metres, but not this week, the runners were actually visible at the bottom of the start ramp.

3,2,1 GO! Away the runners went, lead off by Mikey Walters who had volunteered to pace for a 20 minute target, Mikey having run at Rosliston many times was the perfect candidate to set the pace and actually came in at 19.55, pretty damn close don’t you think? and also achieved a new PB in the process, well done Mikey. 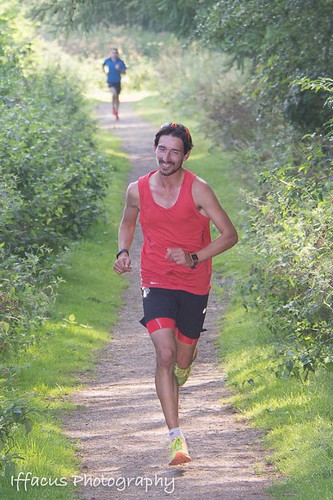 First female was Hannah Oldroyd of Airedale Dodgers who ran 18.57 and set a new female course record, second was Annette Oakham of Colchester Harriers in a time of 21.23 and third was Laura Abolins of Redditch Stars in 21.51. 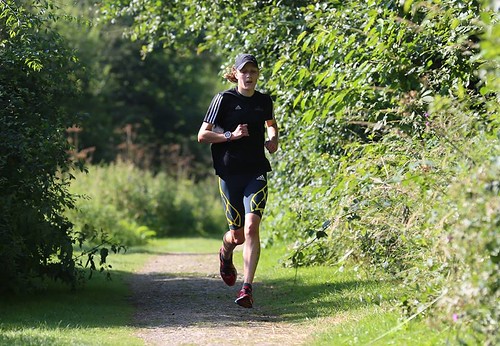 This week there were 476 runners, a whopping 358 were first timers and 102 different clubs were represented. 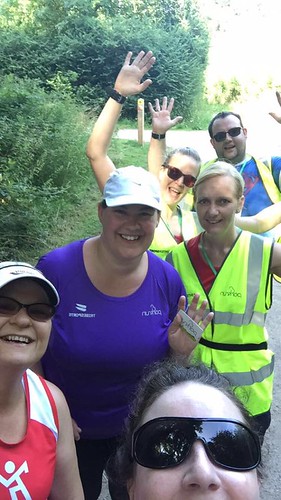 Some ladies from Hanley enjoying the atmosphere with the tail runners.

15 runners recorded personal bests this week, these included Angela Bates, Emma Francis, Christopher Fletcher and Peter Holmes, Peter had just returned from a holiday abroad so must have been careful not to over indulge. Well done to all those who achieved their PB’s.
For all those who came from Thunder Run you now have a target to aim for next year, or before if you would like to come and see us during the year, you’ll be most welcome.

We had 11 runners who were running their very first parkrun, welcome and thank you for choosing Rosliston for your first run, we hope we haven’t scared you off and hope to see you back soon.

Unfortunately there were 19 unknown runners due to forgotten barcodes, we are sorry that we were unable to give you a time but as the parkrun code states “no barcode, no time, no exceptions”. A good way to remember your barcode is to purchase a wristband or some tags from http://www.parkrun-barcode.org.uk/ the tags can be fastened to your shoes or car keys to ensure you always have your barcode with you, personally I have barcodes in both cars, various sports bags and always on my wrist, better safe than sorry.

New milestone club members this week were Margaret Phillips who ran her 250th, Margaret is a regular runner at Cambridge (194 times) and has also run at 37 different venues including some in Poland, Ireland and Australia, WOW!
Jonathon Salt ran his 50th, Jonathon has run 47 times and Conkers, twice at Rosliston and once at Kingsbury (part of a New Years Day double)
Matty Adcock also ran his 50th, Matty has run mostly at Braunstone (20 times) and has run at 22 venues which includes Little Stoke which unfortunately closed down recently after a dispute with the local council.
Congratulations and don’t forget to check your profile to access the facility to claim your shirts.

Volunteers, well what can I say, you guys were, and always are, amazing. As the volunteer coordinator it is great when I see the roster is nice and full come Saturday morning and each and every one of you deserve the title of “Helpers of the Hawk”
This week the following people achieved this accolade: 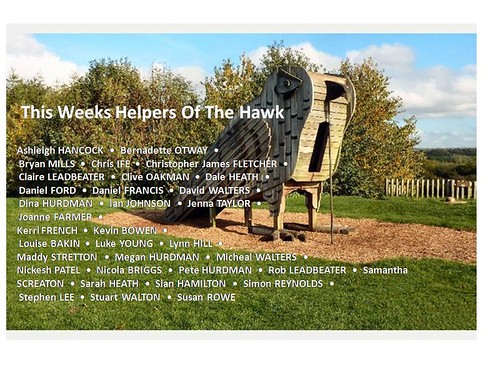 Many of the volunteers this week stepped in to help with additional roles of car park attendants and we had a larger than normal team sorting tokens, the peg board came in handy, unfortunately it only went up to 400 so might need to be made larger for next year. All 476 tokens were returned and are now back on the knitting pins ready for next week so thank you for not taking them home.

parkrun doesn’t happen without it’s volunteers and we are always grateful to those who are able to help out, all the roles are easy to master and there are a variety of roles to try from technical ones such as timekeeping or scanning to roles such as marshalling and tail running, which some may think is just simply pointing or bringing up the rear which they aren’t at all, safety on the course is essential and these roles are our eyes and ears on the course should an issue arise, every volunteer is special and deserves a huge “THANK YOU” every week.
If you would like to know more about volunteering then please feel free to speak to the run director any Saturday morning and we’ll be more than willing to advise you.
Also we’d love it if you could opt-in to receive the weekly volunteer appeal which goes out on a Monday evening, we won’t bombard you, just 1 email per week. This can be done through your profile or by clicking the opt-in button on your result email.

Rosliston parkrun is held every Saturday at 9am, we meet outside the main building and the new runners brief is held around 8.50am, we are a friendly bunch and love to see first timers and tourists along with our regular runners, we always make you feel welcome. All we ask is that you bring your barcode.

The café is open from 9am for supporters to grab some refreshments while they wait and there is always a buzz afterwards with people swapping stories of PB’s while enjoying a brew, a bacon and sausage sandwich (my favourite) or of course some cake of which there is a great selection (also my favourite).

Pop a spare barcode on your car dashboard and you’ll receive free parking on Saturday from 8.30am until 10.30am, if you would like to stay a little longer for a picnic, play on the park or to explore the site a little more then it’s just £3 for the full day, alternatively a yearly pass can be purchased from the shop for just £30 and you can come and go as many time as you like.

I unfortunately missed my bacon and sausage sandwich this week (don’t worry, I went back on Monday for it) as I, along with my daughter Megan (a Rosliston ever present volunteer) had offered to marshal at the Thunder Run, we were located on the ridge at 8K and saw many familiar faces from earlier in the day, I think our little sign got us noticed. 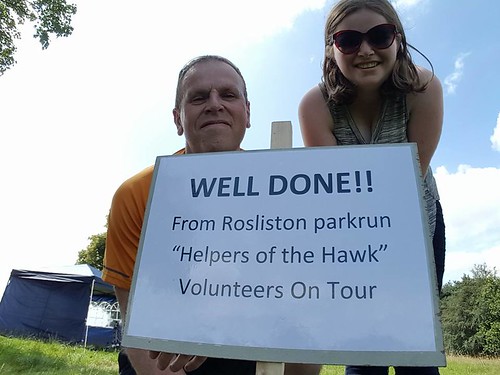 We hope we were able to offer plenty of support and we loved hearing the wonderful comments about Rosliston parkrun from many of you as you passed us. Man, we both slept well Sunday night.