This junior event is currently open to children aged 4 to 10. More information here.
Please do not attend parkrun if you display any COVID-19 symptoms.

It's been a while, sorry about that. Well done to everyone who ran, walked and hopped since the last run report and sorry not to have acknowledged your achievements. You're all brilliant.

Great costumes, from kids and adult helpers alike and some wonderful photos from our regular photographer Emma, which you can find here. Our park is looking particularly splendid this autumn :-).

Roundhay junior parkrun started on 24th November 2013, and since then 1,739 different runners, including participants from 42 athletics clubs, have completed 13,286 runs covering a total distance of 26,572 km, and there have been 2,993 new Personal Bests.

Today's full results and a complete event history can be found on the Roundhay junior parkrun Results Page.

***** URGENT MESSAGE FOR ALL ROUNDHAY JUNIORS ******
Please note that due to the icy weather, tomorrow's Roundhay junior parkrun is moving to our winter course. We will meet by the skate park on Princes Avenue (note that we will probably start a couple of minutes late to allow anyone turning up to the normal course to be redirected).

Can I ask that you spread the word about this to anyone you know who comes to junior parkrun?

Thank you, and see you tomorrow (wrap up warm and don't forget your barcode!)

Happy 2016 to all! After only having a select few running last weekend (what dedication) numbers were up to 86 this week. It was lovely to see so many familiar faces, but also great to see 14 new faces joining us - do children make New Year's resolutions to get fitter? Welcome to the club newcomers and welcome back to the rest of you. We hope to see lots more of you in 2016.

Congratulations to the 14 runners who recorded PBs this week and to Ella and Annabel Lim and Maddie Metcalf, all of whom completed their 21st runs and earned their marathon wristbands. Congratulations also to Cameron Brockway who completed his 11th run and earned his half-marathon band.

The volunteer rota is looking awfully bare for the next few weeks so if you could help out the young runners would be very grateful: we can't do it without the volunteers as there are strict rules about the number of marshals we need, so that every part of the course is visible to a marshal. If you want to help then email roundhay-juniorshelpers@parkrun.com. At the moment you can pretty much pick any role (I've already baggsied mine for Sunday).

Roundhay Juniors parkrun started on 24th November 2013, and since then 1,300 different runners, including participants from 35 athletics clubs, have completed 9,360 runs covering a total distance of 18,720 km, and there have been 2,125 new Personal Bests.

Today's full results and a complete event history can be found on the Roundhay Juniors parkrun Results Page. 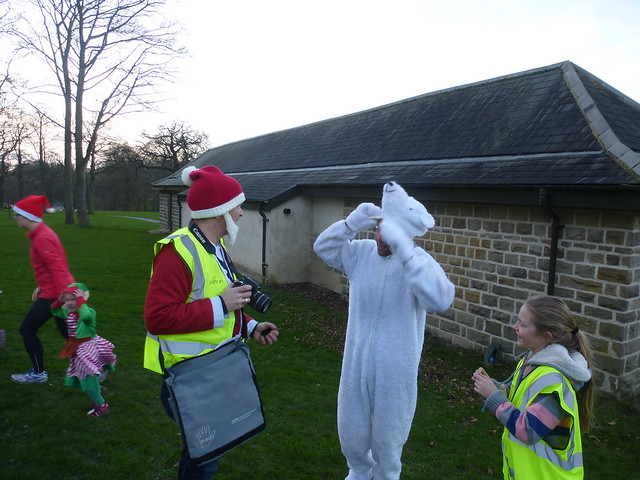 It was great to be back at Roundhay juniors after a few weeks off. This week was our festive Christmas run and we had 73 runners, of whom 7 were first timers and 9 recorded new Personal Bests. Representatives of 6 different athletics clubs took part.

Congratulations to Holly Featherstone on reaching 50 runs – amazing recovery from her broken leg back when we first started. And some beautiful costumes in the Featherstone family! In fact, there were a fair few excellent costumes among both the youngsters and the grown-ups. Thank you for entering into the Christmas spirit (because it’s nearly Christmas). Other milestoners this week were Kyal Head and Douglas Campbell who earned their marathon bands for 21 runs and Ava Martin, Daniel Aggrey,  Jayden Lee Head and Rory Hollowed who all ran their 11th runs and earned their half marathon bands. 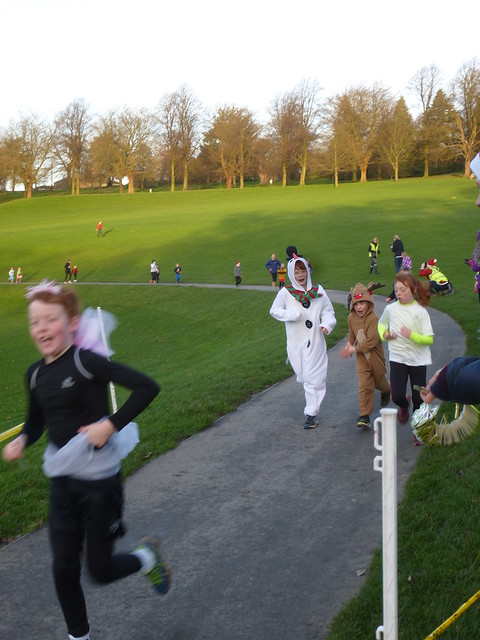 Great to have visitors from Saltaire (who are in the process of setting up their very own junior parkrun) to help with volunteering but we still need volunteers for next Sunday and 3 January – and in the future of course. It it would be a lovely Christmas present for Pete Johnstone if he had the roster full by Christmas Eve :-).

Amazing running today from all our runners and we had girls first, second and third over the line, with new PBs for all of them. Valley Striders must be very pleased to have such speedy runners among their numbers.

Roundhay Juniors parkrun started on 24th November 2013, and since then 1,286 different runners, including participants from 35 athletics clubs, have completed 9,247 runs covering a total distance of 18,494 km, and there have been 2,113 new Personal Bests.

Thanks to everyone who joined us, whether to run, volunteer or support, for our Remembrance Sunday run. It's lovely to see we’ve still got first-timers joining us even though the weather definitely seems to be on the turn. Welcome to the 9 young runners who ran with us for the first time today. 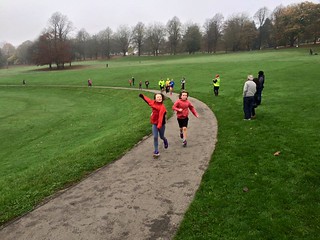 Please make sure that your child hands over their own barcode when they run: we had 2 adult barcodes scanned in our run for 4-14 year olds this week!

Congratulations to Luke Hamer, Rachel Small and Isabella Marsh who all ran their 21st junior parkrun this week and qualified for the marathon club and their coveted blue wristband. And congratulations too to William Bracken and James Corfield who ran their 11th and earned their green half-marathon bands.

Roundhay Juniors parkrun started on 24th November 2013, and since then 1,266 different runners, including participants from 33 athletics clubs, have completed 8,904 runs covering a total distance of 17,808 km, and there have been 2,075 new Personal Bests.

Today's full results and a complete event history can be found on the Roundhay Juniors parkrun Results Page.