On parkrunday (previously known as Saturday) I made the half an hour drive from my home to Roundhay park to try out this course for the first time.

I was expecting a run on concrete paths (as the course description states & some photos on Facebook show). On parking I did what I think many tourists were doing today...checked Facebook for cancellations. It was quite icy outside & indeed the lovely concrete paths of today’s parkrun (especially the hill) had turned into an ice rink so the Winter course was on. Hmm. The Facebook post said it was going to be muddy...trail shoes at home. Drat. Must try harder & remember to keep them in my car in future! I also then turned the car back on, popped the new starting point into my satnav & basically drove 5 minutes round the corner. Glad I arrived early.

Despite the lack of correct footwear I was up for the challenge. Today was my parkrun #34 and although I started my parkrunning journey in warmer/drier months these cross-country style runs are quite ‘fun’. Slow but fun.

A very cool 3°C temperature meant brave souls removing layers of clothing pretty close to 9 o’clock! The start was briefly delayed as some people were still making their way from the original starting point. The course was described as basically run to that big tree then the rugby post & then back to this tree. Do that 3 times. Easy. & it was that simple. Downhill to the rugby post and uphill back to the start.

It was indeed a wet, squidgy, undulating course but I had a great morning. The wonders of parkrun tourism for me is that they’re all so different.

Many thanks to the 24 amazing volunteers, some who had to change plans at the last minute due to the conditions to ensure Roundhay parkrun #455 could go ahead. Many thanks also to all the 398 runners who braved the freezing temperatures to join us.

And finally congratulations to Edward, who at the age of 9, will soon be the owner of a fabulous red 50 milestone tee. Well done! 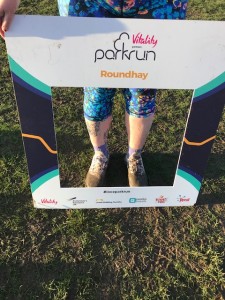