A big thank you to the Roundhay parkrun team for allowing Valley Striders to ‘take over’ last weekend. We all had a marvelous time, the sun shone and we very nearly saw a record turnout, what a wonderful morning it was! 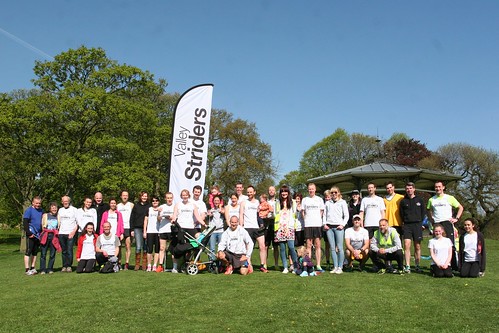 Having been given the opportunity to write the run report, I thought I’d start with something that actually made me jump up and down!  I was absolutely delighted to see our junior 2nd claim runner Alex Pagdin cross the finish line in a Valley Strider vest with a new PB of 17:45. Alex is just 15 years old and has been representing Valley Striders in some of the winter cross country races and more recently, been running with our Thursday night group. It’s encouraging to see that Alex’s stamina is improving and he’s now running stronger and faster, the PBs keep appearing and it’s exciting to see that he’s going to become an exceptional senior runner. Well done, Alex! 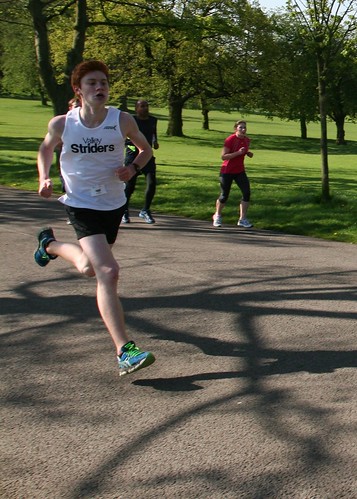 The Valley Strider joy continued as first lady Myra Jones crossed the line in 10th place, knocking 38 seconds off her previous PB to run 19:09. Running without a watch she said she thought she’d ran ‘‘about 19:40’’.  This new PB now ranks Myra as the 3rd fastest lady to have ever ran at Roundhay parkrun and we couldn't be happier for her, another outstanding achievement as she nears the end of her training for the Windermere marathon next weekend. Well done, Myra! 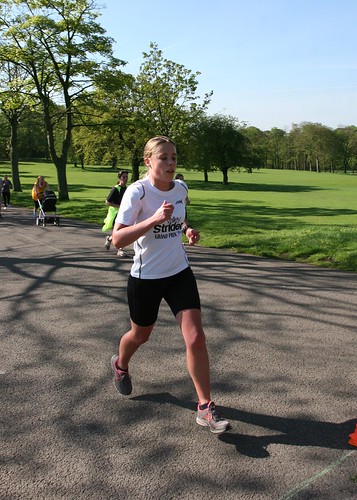 We were lucky enough to be able to field quite a few runners on Saturday and from a review of the results it really was a week for PBs, with 14 Valley Striders running faster than they have before. We further recorded 276 finishers in total and a huge 77 new PBs across the field!  It was also a week for some parkrun tourists amongst an encouraging 42 new runners! At the other end of the parkun spectrum, we had Tim Pocock & Alan Bracken who both completed their 99th runs and will soon join the 100 Club and be granted one of those coveted black t-shirts.

Moving onto the younger amongst us, we’re very proud of all our junior runners at Valley Striders and we’d like to give a special mention and congratulations to Tally (age 10) who was the 15th female to cross the line with a new PB of 24:02. Tally is a regular at the junior parkrun events, she regularly runs at Temple Newsham parkrun and she just keeps getting quicker and quicker as the weeks go by. Another brilliant run, Tally! Also running were older brothers Jordon who secured a new PB of 27:42 and Stephen who ran 22:31 on his first time at Roundhay. We were also thrilled to see another of our junior runners, Callum Parton, knock 7 seconds off his PB to record a new time of 20:05. Callum is just 15 years old & another one that’s showing promising signs of things to come!

I’ve also noticed a few PB flurries recently and one of those belong to none other than the lovely Becky Fishburn who knocked another 19 seconds off her PB to run 20:57. Becky, I’m going to have to admit defeat now, I can no longer validly call you my parkrun nemesis! Really really well done!

In summary, our top 3 male finishers this week:

So, a huge well done to everyone that ran, if it was your first, your 100th, a PB, or just a fun way of starting your Saturday! A big thank you to you all for supporting the event!

Finally, as I've been given this opportunity, I’d like to personally thank the regular parkrun team for all the time and effort they volunteer every single week. Those that know me will know I'm a bit of a parkrun geek and despite the #hillofdoom I really do think that it is one of the best things happening in the UK right now. It is because of people like Graham and Becky and all the other wonderful volunteers that we’re so lucky to have such a great event on our doorstep and of course, more widely available across the country too – thank you so much!

And, on behalf of Valley Striders, I’d like to reinforce the thanks to everyone that makes the run possible each week, we’re very grateful as a club and would like to continue to offer our support as much as we are able. #parkrunyourlife.

I look forward to seeing everyone again when Valley Striders return on mass for the Roundhay parkrun Mob Run on May 17th! Eekk!

Thanks again for another week of #parkrunjoy

Before I go – I'm also pleased to share the news of the Sweatshop monthly prize winner for April 2014:

We are delighted to announce that Rebecca Fishburn was the April recipient of our monthly prize, generously supported by Sweatshop.

Becky's prize is a free pair of running shoes fitted out at her local Sweatshop store. Becky has been parkrunning since September 2012, and has improved her time by nearly 3 minutes since then. She is of course a stalwart volunteer too. We hope that her new shoes will help keep the progress going, or at least make the training sessions a little easier.