On a beautiful Saturday morning the King family arrived at Dunorlan Park to volunteer for parkrun. Ditching our coats in the car we made our way to the café to present ourselves to the Race Director and to find out what our roles would be. My husband Mike had been assigned as pacer for 26 minutes and I was marshalling with our two children by the wooden bridge with another fellow Harrier and his two children. I hoped my two would resist the urge to chase the ducks into the lake!

It was very busy, organising 58 volunteers at volunteer HQ: 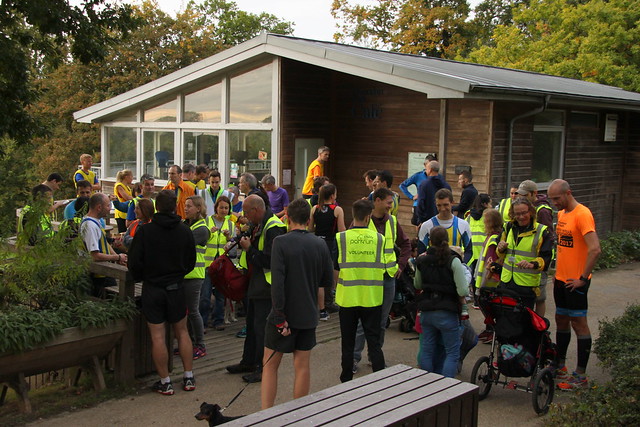 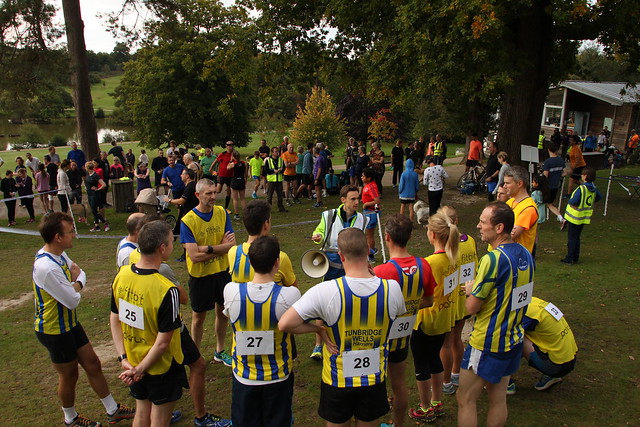 parkrun has played quite a significant part in our life. Mike and I first started attending the Lloyd Park event in Croydon where we used to live and it’s basically what got me into running. When we moved to Tunbridge Wells in 2011 we hoped there would be a parkrun here too, but sadly at the time there wasn’t. We enquired about the possibility of setting one up and were advised to join our local running club instead. So we joined the Tunbridge Wells Harriers (fondly known as the Deckchairs due to the rather vibrant colour scheme of the vest) and have never looked back.

Both of us have really benefited from running with a club, with both our fitness and running times dramatically improving. Although I have dipped in and out of running whilst having my two children. Incidentally the inaugural Royal Tunbridge Wells parkrun was held the day after my first child was born. So whenever parkrun celebrates a birthday, we are also celebrating one in our house too. parkrun and The Tunbridge Wells Harriers both give me the opportunity to forget about being a mum for a short time each week. 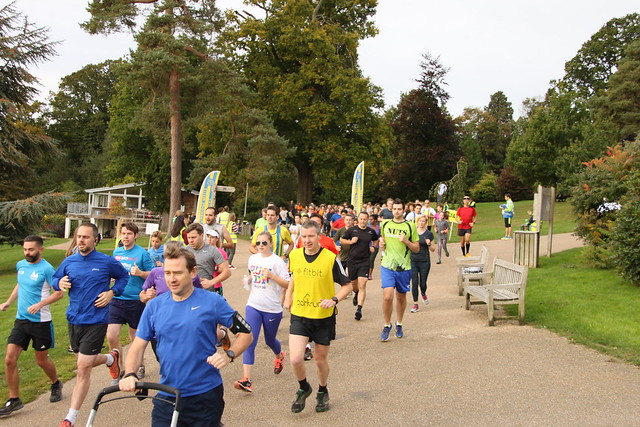 Just after 9am we heard the klaxon go and waited to see how long before the runners reached us. Not long was the answer, in just under a minute the front runners were passing us heading towards the top field with the rest of the field just shortly behind. Soon enough the runners were heading back towards us on their way towards the lake for the first time. The weather it seemed was warmer than predicted as many runners were busy removing layers. I’m pleased to confirm that the ground is still firm and the bog has not yet returned.

Participants make their way past the lake & toward the wooden bridge... 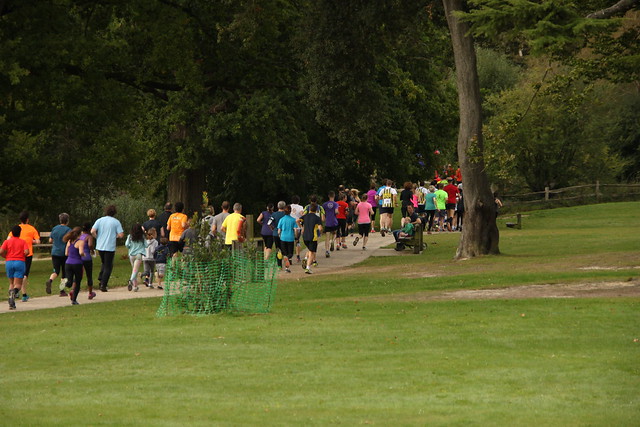 ...and make their way out of the events field and back toward the lake: 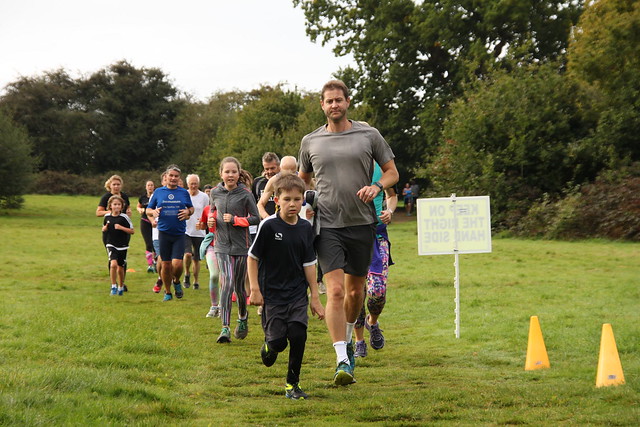 Even before we knew it the front runners were speeding past us again on the start of their second lap. Further down the field, the runners were still smiling and enjoying the respite of the flatter section before the upcoming hill. There then followed a steady stream of runners on both on first and second laps interspersed with lots of pacers who waved as they passed us. Our hands started to get tired from all the clapping, though not as tired as the runners I’m sure, but soon the last few runners passed us for the final time and we were able to stand down and relax.

Congratulations to all that ran this week, hopefully the pacers helped lots of runners achieve new PB’s and even if you didn’t get a PB, no matter what your time was, the main thing is getting out and doing it.

Run Director, Steve Barnfield in a sprint to the finish: 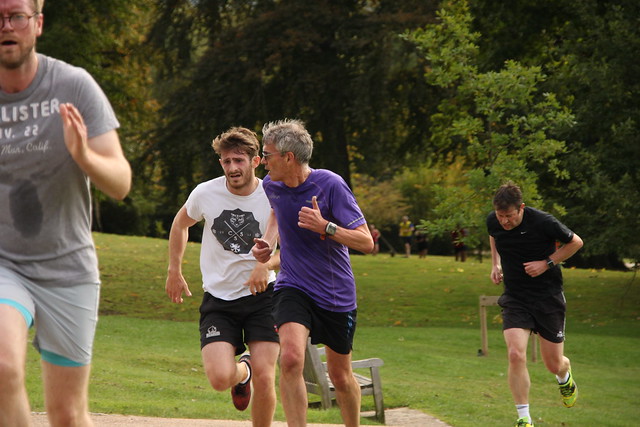 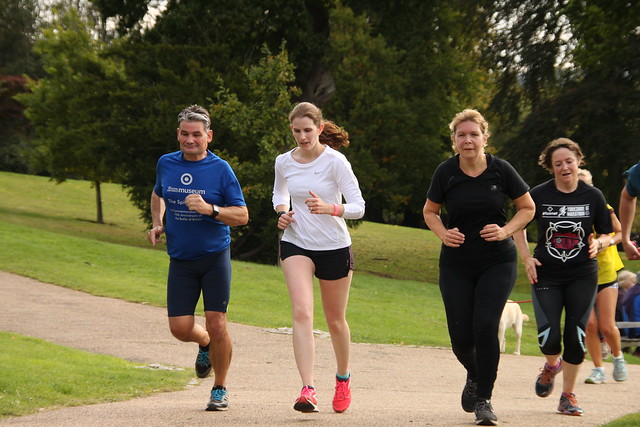 This week 251 people ran, jogged and walked the course, of whom 25 were parkrun first timers and 10 were parkrun tourists. Looking at the results it is a shame to see that there are 28 finishers recorded as "unknown". These "unknowns" are people who have either forgotten to bring their parkrun barcode or who had not registered with parkrun prior to the event. Please, please do your best to remember your bacode each week and if you have not yet registered with parkrun, it takes just a couple of minutes to do so. Upon registration you will be provided with a link to your personal barcode, of which you will be prompted to print off a sheet of 6 copies of your barcode. We would encourage you to put a copy in as many places as possible as a precaution (your wallet or purse, inside your phone case, under your left & right insole of your shoe etc). The results processing becomes much more of a "task" when there are more unknown runners & this adds pressure to our volunteer team, so please spare a thought for those who are spending time & scratching their heads in the cafe to put together an accurate set of results!

Of the returning 188 people (251 less 35 first timers & 28 unknowns), 52 (or 27.66%) recorded new Personal Bests - well done to all and a huge thank you to our pacing superstars. Representatives of 18 different clubs took part (29 from Tunbridge Wells Harriers).

Children are welcome to participate for fun - under 11's must be kept within arm's reach at all times: 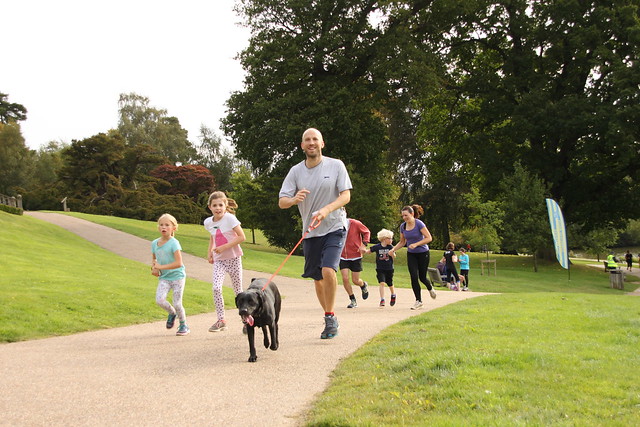 Thanks to this week's volunteers: