When my husband and sister-in-law decided to run in the Maverick Kent trail runs last weekend, it seemed the ideal opportunity for some parkrun tourism. We booked a campsite and started planning, and more recently I started looking at nearby parkruns for myself and our small daughter. Royal Tunbridge Wells was the closest, and promised ducks and a café, and as I quite like an excuse to put pen to paper I sent an email offering to write the run report. The next day I looked a bit closer at the course details. NOT SUITABLE FOR BUGGIES. Ah. I emailed to apologise and withdraw my offer. But then I received a lovely email saying it was possible with a suitable buggy though was lots of grass, so care was required. "It looks a bit more hilly than Tonbridge parkrun", said my husband consulting a list of parkruns ordered by elevation gain, and since that sounded like a challenge, the decision was made. 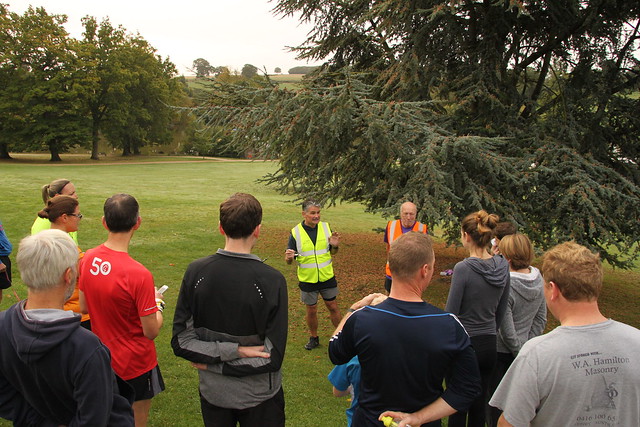 Saturday morning we were woken in the campervan at the normal early hour dictated by our toddler, so had time for a leisurely breakfast, a fair amount of pottering round the campsite and lots of collecting conkers from a nearby tree. The sun was shining, no wind to speak of, and things looked good for our intention to leave our Crowborough campsite at about 8am, running gear on and barcodes attached.

Then, walking back from the toilet block, our running toddler slipped and grazed both hands and knees. After some cleaning, and much kissing better, and a short hunt for car keys, and my purse, we were finally underway nearer 8.15am.

Dropping people off at the Maverick event car park in Groombridge was a slightly silly plan, as every one else was just driving in along the narrow driveway, and not trying to drive back out again. Next, every traffic light was against us all the way to Dunorlan Park. Nearing the park I saw other runners and knew we must be getting close. Had I read the course instructions thoroughly I may have headed straight for the alternative car park, which is where we ended up after a quick tour of the first, full, car park. It felt like we skidded into the last parking space, hauled the buggy out of the boot, lifted the toddler in (minus shoes, what do they have against shoes?) and threw the massive nappy bag underneath. Deep breath, at least we are here, and not yet too late.

Crowds assemble for the pre-run briefing: 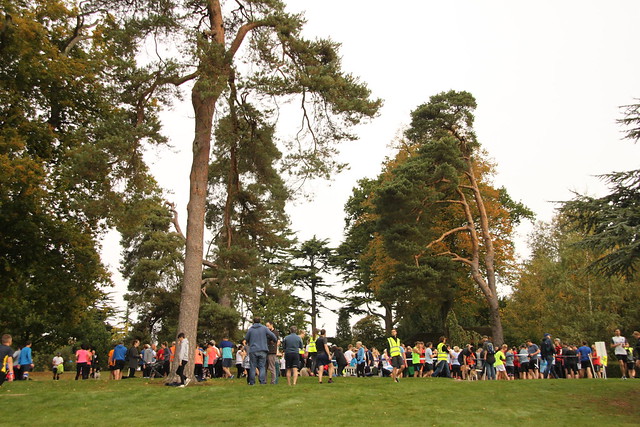 We were too late for my plan to follow other runners to the start, but we could already see a large collection of parkrunners assembled for the run briefing and with minutes to go I started running round the lake and up the hill to the start line. The run briefing was audible as we crossed the bridge, and puffed up the grassy hill. We arrived a few seconds too late to start with everyone else, but overtook the tail walker about 50m into the run, which seemed near enough.

After all that, the run was the fun bit. The previous Saturday we ran at Wyre Forest parkrun whilst on holiday, and today the hills were less steep. I am not used to running on grass but quite enjoyed that, even with the buggy. The lake, boats, ducks and geese and fountain were a welcome change from the seaside at our home parkrun, and the small wish that I might manage to keep up with the buggy in front, all kept me going faster than intended. Also the encouragement from some of the other runners and marshals was very welcome. With a couple of stops to take off my hoody, put on her hoody, tuck her dolly in, we had a rather mixed pace run. I can see that this course may not have been possible with a buggy when more wet underfoot, and probably hazardous with a buggy in the winter, but on Saturday it was rather lovely. Except that last hill. I did not like that finishing hill!

A sea of runners in amongst the Autumn colours 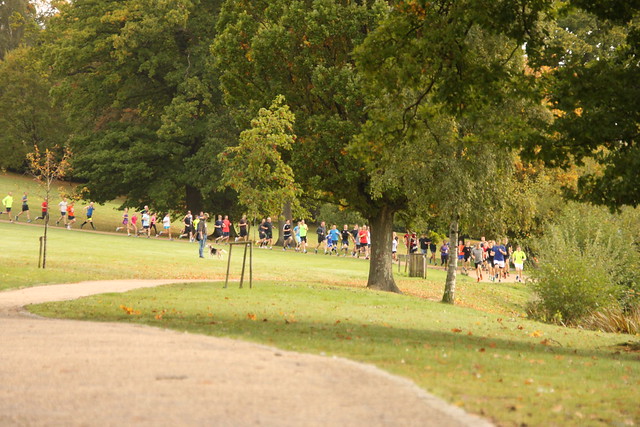 My daughter liked that your cafe has ice cream, I liked the coffee and homemade granola bar very much, and would very much have liked to sit outside overlooking the park had my small co-pilot not vetoed the idea. We had a lovely walk back through the park, looking at ducks and geese and boats and acorns and people and dogs.

Advice for tourists... leave enough time to get there (obviously) and don't assume you will be able to park in the nearest car park. The run was possible with a buggy but could be very different in worse weather conditions. But it was a really enjoyable, if a little hilly, run on a variety of surfaces, with plenty for kids to look at (and a nice nearby café.)

Thank you very much to the Event Director for replying to my emails and to all the volunteers for making the runs possible. We enjoyed your parkrun very much.

This event was made possible by 24 volunteers: