Our latest parkrun person profile introduces Kelvin Desmoyers-Davis, a name many might recognise from its regular appearance near the top of the finishers list.

One of the participants in the first ever Royal Tunbridge Wells parkrun, Kelvin has been taking part in parkruns since before ours existed.

“A colleague at work mentioned this ‘timed 5k event in Maidstone’ and my gut feeling was well that sounds interesting but a bit far to travel!” explained Kelvin. “Then through word of mouth and social media I discovered there was a parkrun starting at Tonbridge, so I went along to their inaugural event. Then – as I’m Tunbridge Wells born and bred – I heard about the then new Royal Tunbridge Wells event and I’ve been here ever since.” 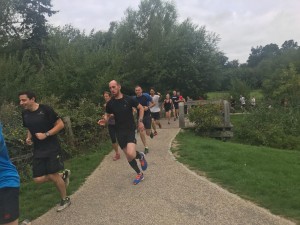 Kelvin is front of the pack

When asked what made him keep coming back Kelvin said: “Different reasons at different stages. Originally I was determined to beat my PBs. Then to get into the 50 club. Now [not far off 250 parkruns] I see it as more than just a 5k and I enjoy the social aspects like catching up with fellow participants for a post parkrun coffee.” 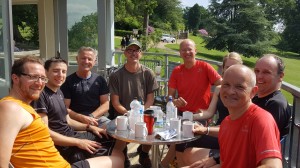 His favourite thing about parkrun is entering the finish funnel, because that’s the moment when he feels like he’s achieved something: “Whether that’s helping someone get a PB if I’ve been a volunteer pacer, renewing my own PB or simply knowing I’m one run fewer away from the next milestone club!”

Having been a parkrunner for so long, Kelvin’s one of our faster participants but is often seen slowing down a little as a volunteer pacer [pacers always choose a time they feel comfortable with, rather than aiming for their own PB, so they can be sure their time is achievable on the day].

“It’s rewarding to know you may have helped someone achieve a PB. The pacer can help prevent runners from going too fast for their target time and so burning out before the end of the run. It’s often easier to just follow someone in front of you!” 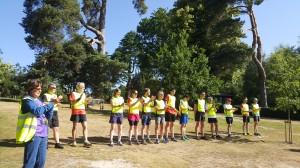 Part of the pacer pack

His advice to others is taking part is: “If it’s a cold day, bring something warm to wear afterwards. If it’s hot, bring a bottle of water. The most important thing is to just try and enjoy taking part. Don’t set unrealistic goals, and avoid injuries by listening to your body.” Invaluable advice whether you’re a 20, 40 or 60 minute finisher!

Kelvin also shares his toughest part of the route: “I find the second lap between the bridge and the events field is the toughest part. Keep something in the tank for this section.” That said, of the 13 different parkruns he’s participated in he also says ours is one of – if not the most – picturesque. We always like to hear praise of our park!

To finish his profile we asked Kelvin to tell us something random about himself. He may be one of our faster participants now, but his response was to admit he used to smoke for more than 10 years. Which perhaps acts as reassurance to others thinking of quitting smoking and taking on a new challenge?