This week's run report is provided by a parkrun tourist who chose our event for his return after the parkrun pause. We think you'll agree he's captured the spirit of the parkrun community here.

Every year as a child I used to watch the London Marathon in my parent’s bed. I used to love watching all these people tackling the 26.2 miles through London. I remember marvelling (once I got some context of just how far it was) at the physical challenge these people had undertaken and achieved. However, since undertaking that distance, it has become clear that I wasn’t watching the thousands of people running miles upon miles for hours and hours. No, I was watching a journey of months of training, sacrifice, tears, success and failure. Yet today it has never been more apparent that what I now see upon watching a marathon isn’t confined to the distance of 26.2 miles but can be seen every week at parkrun.

My story has been a long time coming, my first parkrun since the initial lockdown in 2020. I have been marathon training since parkrun went on hiatus and have admittedly neglected the shorter distances, though never forgetting where it all began. I got my wristband out of the bathroom cabinet, dusted it off and put it on before bed, as had always been my ritual since getting one. I checked my watch, it was low on battery, I put it on charge for the night and set my alarm early enough to make my journey across Kent in time with visions of using my months of marathon training to crack a new personal best and maybe even finally getting under 22 minutes. (After all the route showed a waterside run, surely it was flat?!)

I arrived having realised I forgot my watch (no electronic pacing for me today), theoretically with plenty of time, though completely losing my sense of direction and just finding a parking space in time. I parked up and realised my chosen spot involved running up a gargantuan hill in order to get to the gate, ‘just a warm up,’ I thought, ‘after all, the route must be pretty flat’. 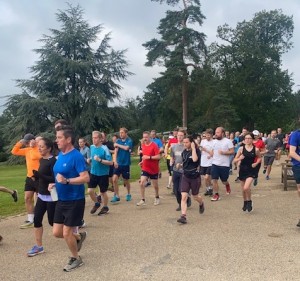 The start of the 5k.

As I descended into the park I saw the image I have missed so much in the distance - that stampede of runners leaving the starting line – I was late. I bolted down the hill to join at the back, starting Strava on my phone a few hundred meters in to the route and tried to get into my old rhythm. It was going well for most the first lap, and then I hit the climb I later learned is nicknamed Heartbreak Hill. My legs turned to lead and my efforts to thank those wonderful marshals en-route descended into a lifeless wave. I eventually hit Heartbreak Hill a final time and stumbled home not even close to my target time. I checked my Strava and saw 214ft of elevation, so much for my flat run. 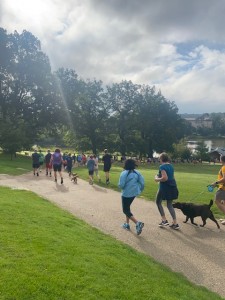 So what did I learn from Royal Tunbridge Wells parkrun? A tough but scenic route – I can deal with the elevation and I can deal with the changing surface underfoot (grass, dirt, path, grass, dirt path), but the combination made it a real challenge. The support from the marshals was great and it was particularly heart-warming to see all the volunteers clapping at the end of the first lap and the sense of community was clearly fantastic. Though mostly I learned how dependant I have become on my watch, and receiving an impressively quick text with my time gave me that rush I got when I first started. 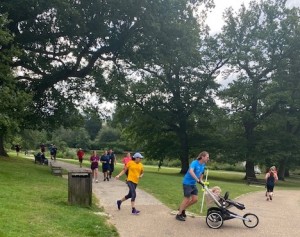 Though in reality the story of my run is not what parkrun is about. Like my opening statement it is the stories that go with each runner. As I finished, got my breath back and my legs began to regain their coordination I sat and watched each runner cross the finish line. Each carrying their own story between the two timekeepers. Some looking as I had felt and some looking much more energetic, some crossing with others, clearly sacrificing their own time to support a friend or family member, though all with that sense of pride and achievement that made parkrun part of my pre-covid weekly routine. 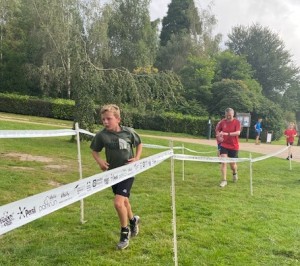 As I sat on that grassy slope it made me proud to be part of a community that is so supportive, so welcoming and always there for people. Whatever brought all those people to that start line (or a few hundred meters from it in my case) on that warm, humid morning ultimately didn’t matter. Whether, like me, it was a precious break from taking the kids to their weekend clubs, being talked into it by a friend that claims ‘it’s only 5k’, putting the stamp on the end of the couch to 5k they started in lockdown or the desperation to finally break a time barrier, we all crossed that line and achieved something. 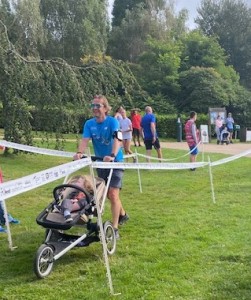 We all face different challenges during our 5k.

What really matters is that the fantastic volunteers gave up their time to make today a possibility and to make sure parkrun will always be there for those who need it, whatever their journey may have been in getting to running, jogging or walking those long five kilometres. 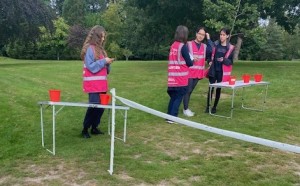 Thank you to all the volunteers.